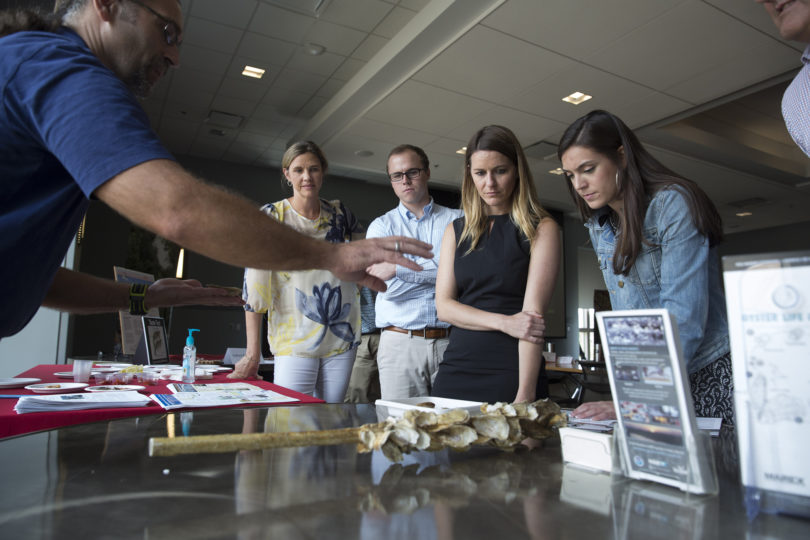 At UGA’s special collections libraries—about a four-hour drive from the Atlantic Ocean—a group of federal legislative staff members got a firsthand taste of the university’s research efforts and facilities on the state’s coastline.

Their sampling included taste-testing shrimp possibly afflicted with black gill, observing clam formations, and learning about the projects and studies the university is overseeing.

The event was one of four presentations that were part of this year’s Federal Legislative Retreat. On Aug. 18 and 19, staff members for both of Georgia’s U.S. senators, Johnny Isakson and David Perdue; 12 of the state’s 14 House seats; and the Senate Appropriations Committee attended the retreat.

“This is a great opportunity for UGA faculty to highlight their research and work to national policy makers,” said Andrew Dill, director of federal relations in the university’s Office of Government Relations. “This event allows congressional staff to experience firsthand the impact federal investment has on research and innovation at UGA and beyond.”

The event is also important because many faculty members and their research projects receive funding from federal organizations such as the National Oceanic and Atmospheric Administration.

During the “UGA on the Coast” presentation, the 38 staffers heard from four faculty members who oversee and conduct marine-related research: Merryl Alber, director of the UGA Marine Institute on Sapelo Island; Clark Alexander, interim executive director of the Skidaway Institute of Oceanography; Mark Risse, director of the Marine Extension Service and Georgia Sea Grant, a public service and outreach unit; and Daniela Di Iorio, chair of the marine sciences department, which is based in the Franklin College of Arts and Sciences.

After the presentation, the legislative staffers broke into smaller groups and visited five stations for more in-depth presentations from faculty on the university’s marine-related research. One station was devoted to the seafood industry—and had the black gill shrimp taste test—while another featured faculty discussing the water quality of coastal waters and a third explained the use of “gliders” that can travel in the ocean for months gathering data.

Other presentations included an overview of all the university’s research as well as sessions on regenerative medicine, agricultural research, textiles, vaccines, 3-D technology, the music business and a discussion of the 2016 election.