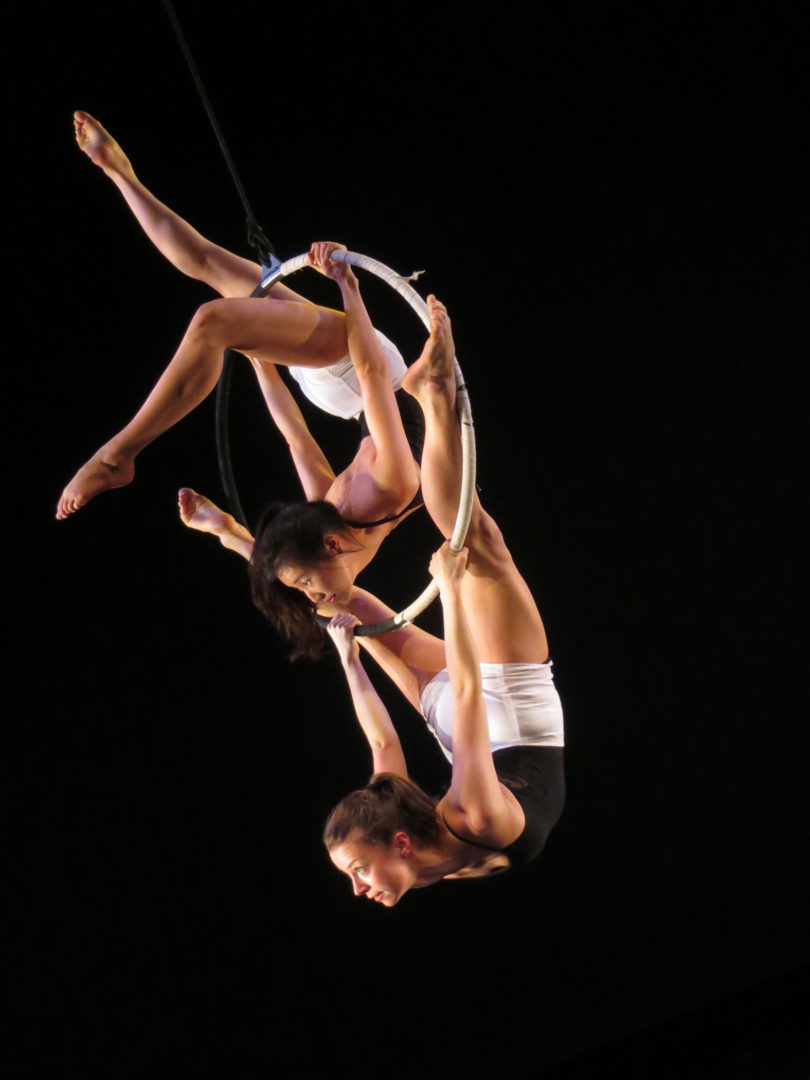 HyeYoung Borden and Mirna Minkov perform on the single point lyra in preparation for the CORE Concert Contemporary and Aerial Dance Company's 2015 show.

Athens, Ga. – The University of Georgia CORE Concert Contemporary and Aerial Dance Company will present a dance, aerial dance and multimedia concert Feb. 25-28 at 8 p.m. in the New Dance Theater in the dance building on Sanford Drive.

The concert on “The Human Soul Connection” will guide the audience through an exploration of the human soul. Atlanta-based dance companies Staibdance and Zoetic Dance Ensemble will join students on stage.

“In this presentation of repertory and new works that explore the human soul connection, we will highlight the talent of UGA student artists,” said Bala Sarasvati, CORE artistic director and the Jane Willson Professor in the Arts. “We will also showcase several alums who exemplify continued artistic and creative development in their career endeavors.”

“This piece is a physical depiction of the mental work that occurs when we as individuals choose to topple the forces in our lives that keep us in unproductive cycles,” Thomas said.

Staibdance artistic director and choreographer George Staib will be presenting excerpts from “Attic.” Born in pre-Revolutionary Iran, Staib draws on his memories of a country with both rich cultural traditions and dangerous political unrest.

“In creating ‘Attic,’ together with a cast of 12 dancers, I considered how and where we hold, carry, store and often bury remembrances of the past,” he said.

Zoetic artistic director and choreographer Mallory Baxley will premiere “LUX,” a choreographic work inspired by how the memories of youth influence and shape perspectives and outlooks.

“LUX examines the complexities of reality and fantasy,” Baxley said. “Through diverse movement language and athleticism, LUX captures the essence of playful energy and mystery.”

Tickets are $16 for the general public and $10 for students and seniors and are available through the Tate Student Center box office, online at pac.uga.edu, by phone at 706-542-4400 or at the door beginning at 7 p.m. each evening of the concert.

A student group rate of $5 per ticket is available for those who make a one-time purchase of eight or more student tickets. To purchase group tickets, contact the department of dance at 706-542-4415 by Feb. 24.

For more information on the CORE Concert Contemporary and Aerial Dance Company, see http://coreconcertdance.com/CORE_Concert_Dance_Company.html. For a preview video of the performance, see http://youtu.be/H6gPCtPJ-DY.