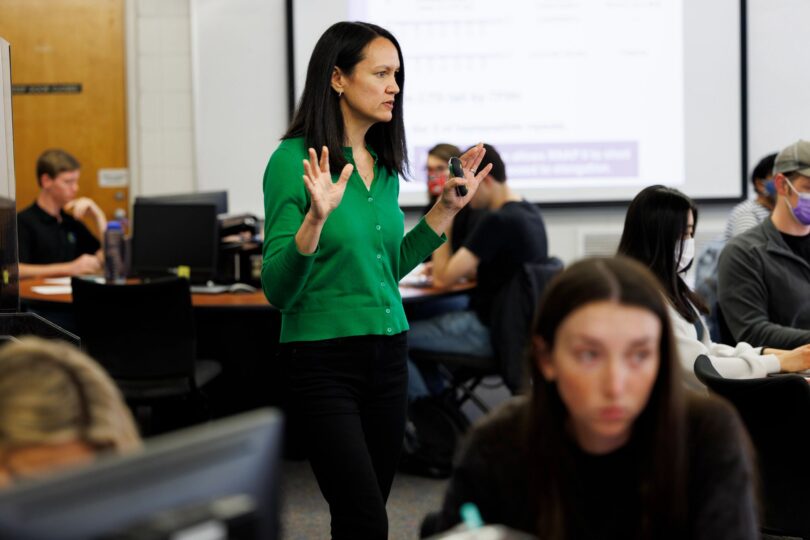 Collaborative group work is increasingly prioritized across higher education, particularly in the life sciences and STEM-related fields. But how students communicate within these smaller groups is key to their success.

New research from the University of Georgia suggests that students who understand what they do and do not know, and who are willing to ask for clarification and correct misinformation in the group, are more successful in small-group problem-solving.

The study, “Oh, that makes sense”: Social Metacognition in Small-Group Problem Solving, was published in the current issue of Life Science Education.

The new research advances the understanding of how students succeed in innovative instruction environments such as SCALE-UP classrooms and active learning courses.

“The move toward more collaborative learning is really big in life science education,” said Julie Dangremond Stanton, associate professor in the Franklin College of Arts and Sciences department of cellular biology and corresponding author on the study. “If we’re going to ask students to work in small groups, then we have to provide them with some guidance on how to collaborate effectively while problem solving because they are still learning how to do this. Guidance on collaboration may be particularly important when we ask students to use scientific reasoning with their peers.”

Using discourse analysis to examine transcripts from two groups of three students during breakout sessions in an upper-division biology classroom, researchers identified statements and questions that work best in small-group settings. By analyzing the conversation for metacognition (the awareness and regulation of thought processes), the team – led by postdoctoral researcher Stephanie Halmo – identified seven types of metacognitive statements or questions.

By coding for reasoning, they uncovered four categories of metacognitive statements or questions associated with higher-quality reasoning. For example, when students identified a point of confusion and asked for clarification (e.g., “I don’t understand. Can you explain that?”) the group’s responses helped move their problem solving forward. As another example, when students asked questions that evaluated their group’s answers (e.g., “Does our answer address the question?”), the group’s responses helped them reason at a higher level.

Correcting a peer can be daunting, but it’s beneficial

“It’s fascinating to see. If you and I were working with one other person and you said something to me about how cell division works, and I thought I understood how that worked, but as you’re explaining it, I realize I don’t actually understand how cells divide,” Stanton said. “I might try to clarify my understanding by explaining it back, but maybe the third person we’re talking with realizes, oh no, Julie is still confused, let me correct this part and help her try to understand it.”

That ability, according to Stanton, can be important even though students may be otherwise socialized not to directly correct someone, because it could be considered confrontational. It’s a skill that also combines with an ability to listen and think about the discussion in the group.

“We created timelines of what students did during breakout sessions, and we see times when students are not speaking to each other, and I really appreciated this idea that maybe some silence can be very beneficial to group work, when you take a moment to think about what you’re going to say before you say it, or think about the problem before you jump in to solve it,” she said.

The researchers were initially excited by another group in the study who spoke continually, even finishing each other’s sentences. But the audio recordings and transcript revealed that, while the group had some success in problem solving, they would never directly correct each other. Even when one student said something that another knew was wrong, the second did not acknowledge the wrong answer by offering a correction or asking a question, and instead gently moved to something else.

According to Stanton the silence is an interesting indicator for both students and faculty, who may be more inclined to correlate noisy classroom discussions with better active learning as well as become concerned with periods of silence while students are working in groups.

Overlapping utterances that don’t include students being direct with one another can lead a group discussion in circles and may exhaust the participants. Instead, the new research suggests providing students more coaching around the metacognitive statements and questions that can promote problem solving. For instance, while it is normally not seen as socially acceptable to correct someone, not stopping to ask questions or make a point could lead down a road that’s not productive for the work or the learning situation as designed.

“We often think about metacognition as realizing what you do and don’t know,” Stanton said. “And a lot of times it’s really beneficial to work with other people because when you hear them talk – or when you explain something to them – you start to realize, OK wait I don’t actually know what I thought I knew.”