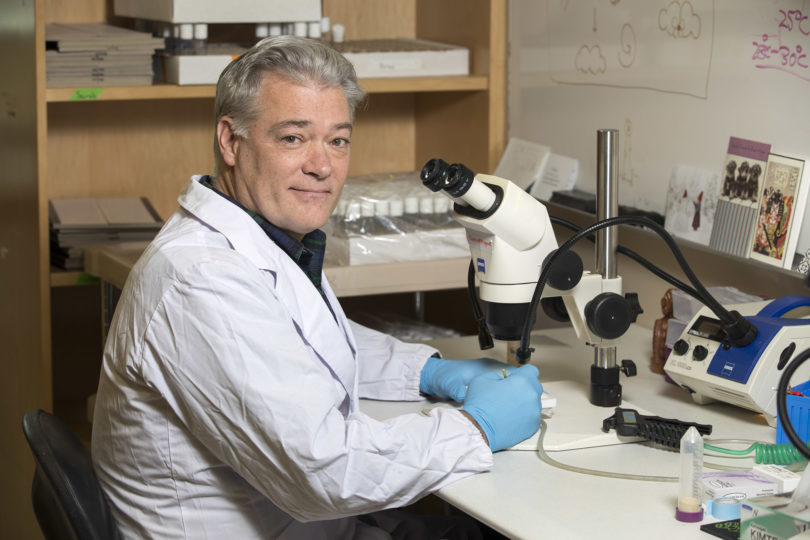 Michael Tiemeyer in his biochemistry and molecular biology laboratory. (Photo by Peter Frey/UGA)

UGA researcher working on test to determine severity of the disease

In the midst of the COVID-19 pandemic, researchers across the world are looking not only for a vaccine to combat the virus, but also better testing resources to find out both who is infected and how serious those infections may be.

Michael Tiemeyer, Distinguished Research Professor in the University of Georgia’s Complex Carbohydrate Research Center, is trying to determine if a saliva test could predict the severity of a coronavirus patient’s disease course.

The test would be derived from glycosylation profiles of patients’ mucin, a type of bodily secretion that is found in both saliva and mucus. Glycosylation is related to bodily cells’ protein manufacturing function. It is the process by which cells modify those proteins by attaching carbohydrates, or glycans, that exist on the surface of every cell. Glycans regulate how cells interact with one another and with their environment, and they’re the first thing a virus encounters when it attempts to infect a cell.

“Many viruses use those glycans to attach to cells, or to be released from cells to go out and attack another cell,” said Tiemeyer, CCRC co-director and a professor in the Franklin College of Arts and Sciences department of biochemistry and molecular biology. “The influenza virus, for example, has a binding protein on its surface that recognizes specific glycan structures that are found at the surface of lung cells.”

While there’s no evidence that COVID-19 has a binding protein similar to influenza, it still has to negotiate with glycans at the surface of cells it infects, Tiemeyer said. The virus infects specialized epithelial cells, which line the body’s airway and produce “prodigious” amounts of mucus.

When someone is infected with COVID-19, epithelial cells in their submucosal gland, which secretes mucus, are compromised. The virus kills the mucus-producing epithelial cells, resulting in the infection’s characteristic dry cough. Tiemeyer is working on defining glycan markers for normal submucosal gland function, which could be compared to a COVID-19 patient’s reduced gland function.

“If gland function in an individual is different, it may tell us how severe their expected disease course is, and it may tell us if they are more sensitive or less sensitive to the virus,” Tiemeyer said. “We know there are differences from person to person, and some of those differences may lie in how their submucosal glands are functioning.”

Tiemeyer is working with Richard Boucher, director of the Marisco Lung Institute at the University of North Carolina – Chapel Hill. Since the onset of the pandemic, Boucher has adjusted his lab specifically to study the lung physiology of COVID-19. He’s able to grow human epithelial cells in culture dishes and collect clinical mucus samples from consenting patients, which he and Tiemeyer can study.

Viral load, referring to the number of viral particles carried by an infected individual, is a useful indicator for identifying the severity of symptoms for someone infected by several viruses, like SARS. But for COVID-19, viral load thus far hasn’t shown to be a useful predictor.

“The jury is still out,” Tiemeyer said. “I think we still don’t have enough data to be sure, but that means people want other ways to look at the infection besides viral load. Physicians would like some other marker they could use to say, ‘This person needs more attention than this person, because their disease is more severe.’ That’s where we come in—trying to molecularly identify changes in mucus and mucin glycosylation and understand how they relate to disease progression.”

Tiemeyer is currently in the first phase of his research, trying to define a normal pattern of infection. Once that’s established, he and his team can investigate how the infection changes and correlates with disease severity.

The ultimate goal of the research is to produce a saliva test, where a COVID-19 patient’s mucus would be analyzed to determine if it fits a mucin glycosylation profile that would indicate a probable need for hospitalization. Tiemeyer said the test won’t come to fruition during the current wave of infection but might exist in time for any future wave that may occur.

Tiemeyer is currently applying for funding from the National Institutes of Health, which supports Boucher’s research. Just like many other UGA researchers, Tiemeyer has worked quickly to convert his lab for studying COVID-19.

“We’re shifting gears, trying to participate and finding funding as we can,” Tiemeyer said. “I’m really impressed with how many people at UGA have been able to turn on a dime and apply their attention to a new area of research.”