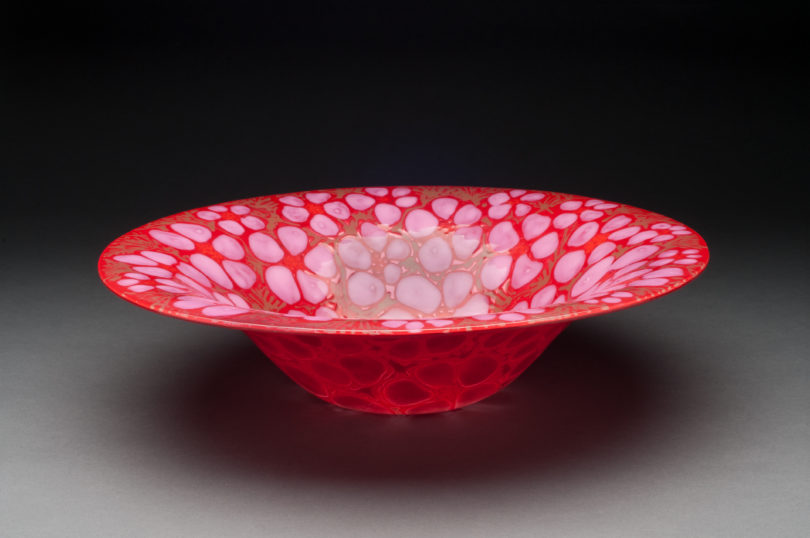 A fused glass bowl by early UGA craft instructor Frances Stewart Higgins is part of the exhibition at the Georgia Museum of Art.

When most people hear the word “agriculture,” they think cows, chickens and crops, not fine handmade jewelry or beautifully crafted ceramics. But, believe it or not, the University of Georgia’s art school got its start in the College of Agriculture, back in 1927. This unusual beginning for what was then the art department likely led to the strength of its craft programs, which are the subject of a new exhibition opening at the Georgia Museum of Art at the University of Georgia Feb. 1.

“Crafting History: Textiles, Metals and Ceramics at the University of Georgia” runs through April 29 at the museum and is the first attempt to document the full scope and story of the university’s craft program. As its three curators dug deeper into their research, they kept expanding the size of the project. The result was not only an exhibition that covers craft at the university from the 1920s to the present but a 372-page, nine-chapter book, published by the museum, that documents their findings more permanently.

Ashley Callahan, independent scholar and former curator of decorative arts at the museum; Annelies Mondi, the museum’s deputy director and a UGA graduate in art; and Mary Hallam Pearse, associate professor and area chair of jewelry and metalwork, Lamar Dodd School of Art, worked together throughout the process, gathering information wherever they could. They used the university’s Hargrett Rare Book and Manuscript Library extensively, reading through old annual reports, letters and scrapbooks; they tracked down surviving craft faculty (or, in some cases, their family members) and conducted lengthy interviews; they even crowd-sourced information on Facebook. They used every means they could think of to piece together a story that needed to be told.

Both the College of Agriculture and the State Normal School (which trained teachers and occupied the land that is now the university’s Health Sciences Campus) offered classes in craft even before 1927, with noted Athens architect Frederick J. Orr serving as director of “manual arts” at the latter. By 1914, the College of Agriculture offered classes in basketry, to enable students to earn money for college expenses through the skills they gained. When UGA began admitting women, in 1918, it also established the division of home economics, within the ag school. Now the College of Family and Consumer Sciences, it featured classes in pottery, dyeing, weaving and metalwork, many of which were taught by Mildred Pierce Ledford, the first head of the new art department.

The 1933–34 school year led to the reorganization of UGA, to incorporate the Normal School and the semiautonomous College of Agriculture, and the art department moved to UGA’s Franklin College of Arts and Sciences. Lamar Dodd, the artist and administrator for whom the art school would later be named, joined the faculty in 1937 and put a significant stamp on it. Although Dodd came from a fine art background, he continued to highlight the craft programs whenever possible, as in the small relief murals that remain over the east and west entrances to UGA’s Fine Arts Building, which were created by Dodd’s students and show pottery and weaving alongside painting and sculpture. 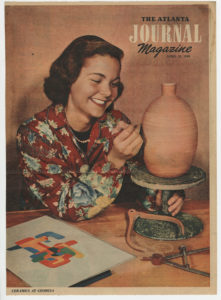 This cover of Atlanta Journal Magazine by Guy Hayes features Gwyneth Oliver from Atlanta working on a pot in 1949. Courtesy of Hargrett Rare Book and Manuscript Library, University of Georgia Libraries

As the art school continued to grow, especially following the GI Bill, which greatly expanded the number of college students, it occupied more and more buildings on campus. As with its earliest years, women continued to play an important role in the craft program; Frances Stewart Higgins (who would become a famed studio glass artist) ran the program by herself during World War II. Craft faculty at UGA became well known and influential nationwide. Earl McCutchen, who pursued both ceramics and glass; Gary Noffke, in jewelry and metalwork; and Glen Kaufman, in fabric, were well represented in national exhibitions and professional organizations.

The craft faculty also participated in and influenced many other arenas at the university and regionally. Robert Ebendorf, in jewelry and metalwork, both helped found the Society of North American Goldsmiths and created a mace and medallion for the inauguration of UGA President Fred Davison, in 1968. Craft faculty created ceremonial fixtures for the Temple in Atlanta, a Jewish center of civil rights advocacy, shortly after it had been bombed by white supremacists in 1958. They also advocated for and strongly supported the university’s desegregation; Darlyne Atkinson Killian, the first African-American admitted to a graduate program in art at the university, studied ceramics while obtaining her master’s degree.

The exhibition features work from many of the artists and all of the faculty members who made up UGA’s craft programs, filling six galleries with textiles, ceramics, glass, jewelry and metalwork from the 1920s to the present. Programs related to the exhibition include 90 Carlton: Winter, the museum’s quarterly reception on Feb. 1 at 5:30 p.m.; the ninth Henry D. Green Symposium of the Decorative Arts (Feb. 1–3 at the Classic Center; registration and prices online); a Toddler Tuesday on Feb. 6 at 10 a.m.; a Teen Studio program on Feb. 22 from 5:30 to 8:30 p.m.; a screening of “Craft in America: Memory” on Feb. 22 at 7 p.m.; a public tour on March 7 at 2 p.m. focusing on women artists; a Family Day on March 10 from 10 a.m. to noon; a talk by craft scholar Namita Wiggers on March 21 at noon; and a panel discussion on March 22 at 5:30 p.m.. The book will be available for purchase in the Museum Shop, from Avid Bookshop or online from Amazon.com for $40.

This exhibition is sponsored by a Craft Research Fund grant from the Center for Craft, Creativity & Design, Aurum Studios, the Lamar Dodd School of Art, the W. Newton Morris Charitable Foundation and the Friends of the Georgia Museum of Art.