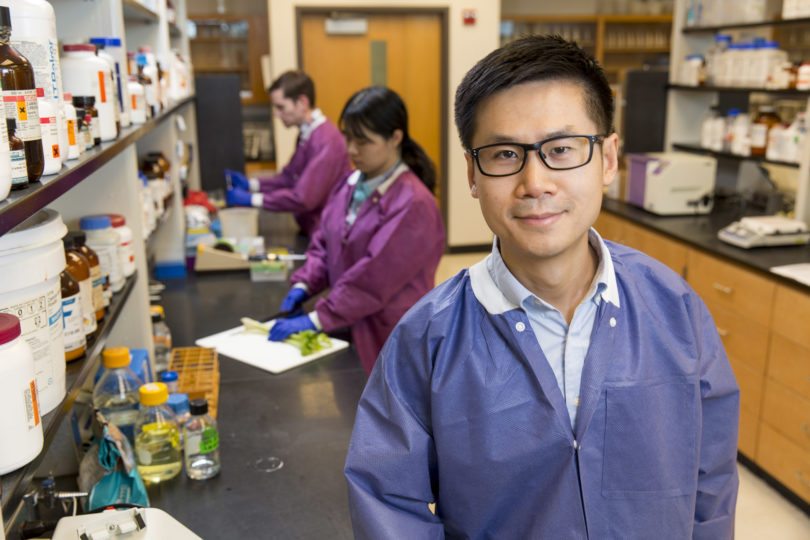 Xiangyu Deng, assistant professor of food microbiology, is recognized for creating a bioinformatics tool that is helping transform global laboratory surveillance of salmonella, the most prevalent bacterial foodborne pathogen in the U.S. and worldwide.

His creation, SeqSero, is a powerful web-based tool that offers a novel and rapid approach to serotyping salmonella strains obtained from infected humans, animals, foods and the environment during epidemiological investigations.

His innovation replaces a complicated and time-consuming laboratory protocol with whole genome sequencing that allows accurate, fast “fingerprinting” of any salmonella strain.
SeqSero has cut analysis time from days to seconds, while adding no additional cost. The tool has been adopted by U.S. federal agencies and state health departments as well as laboratories and regulatory agencies in other North American countries, Europe and Asia.

Katrien Devos, professor of plant biology, has made numerous important contributions to the understanding of plant genomics, in particular wheat, millets and switchgrass, a biofuel crop.

Her work with foxtail millet, an important crop in China, and finger millet, a food security grain crop in East Africa, has highlighted the need to bring attention, funding and research to lesser-known orphan crops. Little was known about the genetics of either species before Devos began her project, but her pivotal paper on the genomics of Setaria has formed the basis for a new community of researchers working on foxtail millet and its wild relative, green foxtail, which are now considered models for understanding the genetics of switchgrass. Devos now is leading a similar endeavor in finger millet.

This work has created a noticeable shift from the community’s single-minded emphasis on major crops.

George Foreman, director of UGA’s Performing Arts Center and associate professor of music, guided the production of “Music for the Tsars: Works from the Russian Institute for the History of the Arts,” a CD that significantly advances music education and performance in Russia and the U.S.

This massive creative and scholarly undertaking began in 2012 with the goal of highlighting the Russian Institute for the History of the Arts’ rich and largely unknown collection of 19th-century wind band music. Foreman coordinated all components of production and recording, while also capturing the original intent and nature of the music.

In 2014, the works were recorded in UGA’s Hodgson Concert Hall by Hodgson School of Music faculty and more than 100 student musicians. This wonderful recording will have a lasting impact on the world of band literature, the lives of students and others who contributed, and the global perception and reputation of the university.

Deepak Mishra, associate professor of geography and leading international scholar in the use of satellite remote sensing techniques, co-created the Small Satellite Research Laboratory in January 2016, starting the space research program at UGA.

The goal of this program, made possible by funding from NASA and Air Force Research Lab, is to launch a student-built low Earth orbit satellites, aka CubeSats, by 2018 that also provide faculty with unique space-based data that will advance research on coastal ecosystems, marine processes and water quality. Mishra and colleagues assembled a 50-member team of faculty and students from physics, mathematics, computer science, marine science, geography, engineering, design and management, among other departments, to guide the missions. These projects will develop cutting-edge technologies, including running “structure from motion” techniques from an orbiting platform—something never before attempted.

Elizabeth Wright, professor of Spanish in the Romance languages department, is recognized for a seven-year project in which she recovered the story of Europe’s first known poet from the black slave diaspora, Juan Latino.

This poet and educator, born in slavery circa 1517, is a Renaissance precursor to African-American social reformer Frederick Douglass.

Anticipating the American abolitionist movement three centuries later, Latino secured education, freedom and literary recognition in Spain. Until Wright’s efforts, Latino was little known, due to the difficulty of his literary works written in Latin verse and the scarce documentary evidence of his life.

Marshaling skills in literary translation of both Latin and Spanish, as well as archival detective work, Wright undertook two interconnected research projects that together have recovered Latino’s literary legacy and pieced together his life story.