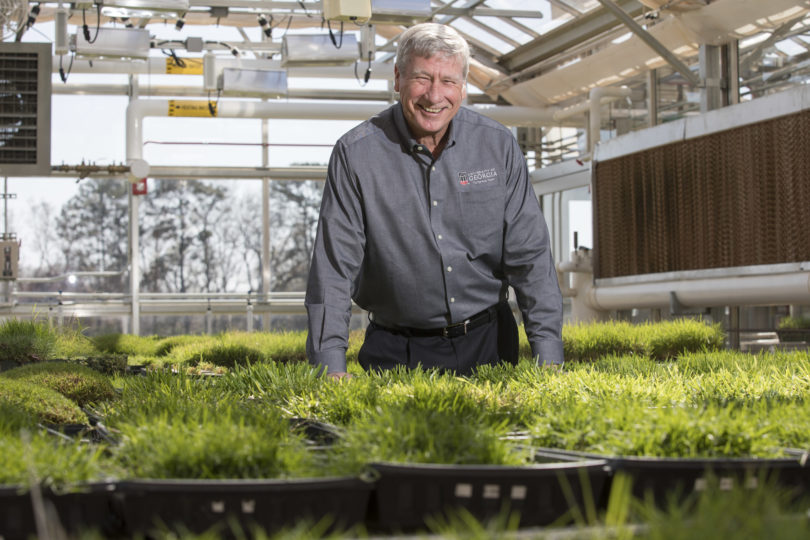 Paul Raymer has worked in several areas of agriculture since first studying animal and plant sciences. (Photo by Peter Frey)

More than 40 years ago, a young man from Arkansas decided to become an agriculture major because “it was the beginning of the Green Revolution, and agriculture had a bright future.”

Today that man, University of Georgia professor Paul Raymer, has served Georgia agriculture as a variety tester, a soybean specialist, a canola breeder and a turfgrass breeder. 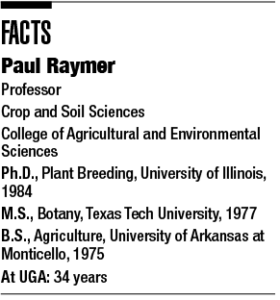 His career path began when he studied animal and plant sciences for his bachelor’s degree at the University of Arkansas. Next, for his master’s degree at Texas Tech University, he researched how cotton deteriorates and, if inhaled, can cause lung disease in textile workers.

Raymer didn’t plan to earn a doctorate, but a friend encouraged him to keep an open mind.

“He said, ‘At least take a job at a university.’ That was some of the best advice I have ever been given,” Raymer said.

He accepted a position in the University of Illinois’ variety testing program. When the university’s soybean program expanded, Raymer became the soybean agronomist. And, as his friend predicted, he applied to graduate school and worked with Dick Bernard, the renowned U.S. Department of Agriculture Soybean Germplasm Collection curator and soybean breeder.

In 1984, Raymer moved south to the UGA Griffin campus to lead the UGA College of Agricultural and Environmental Sciences’ Statewide Variety Testing Program. The program tests more than 30 agronomic and forage crops and provides recommendations to Georgia farmers.

Eager to develop his own research program, Raymer added canola breeder to his list of duties.

“Canola had just received ‘grass’ status and I started working more and more on canola, and the college supported the crop’s potential in Georgia and the Southeast,” he said. “I pulled together a team of economists, agronomists, entomologists, plant pathologists and UGA Extension personnel. Selfishly, I enjoy project leader jobs; they still remain as the best jobs. The level of independence you get and the ability to be creative is amazing. I really enjoy building a successful team, and I enjoy being innovative and creative.”

In 2000, when soybean specialist John Woodruff retired, Raymer’s career took another turn when UGA Extension enlisted him to take over the program.

“I faced a dilemma. I knew I could manage two jobs, but not three,” he said with a laugh.

So, he settled in as the UGA Cooperative Extension soybean specialist and canola breeder…for a while.

This led Raymer to his current position as UGA turfgrass breeder.

For the past 15 years, he has been able to focus on one area: Developing improved cultivars of seashore paspalum, tall fescue and creeping bentgrass for high-stress environments. New releases are bred for improved disease resistance and salt and drought tolerance.

He’s contributed to two turfgrass variety releases—“Sea Isle Supreme” and “Sea Star” paspalum—and been involved in the development of others. Raymer and CAES scientist Jack Huang hold a patent for an enzyme that removes excess thatch from golf courses. And, he is currently working with CAES plant breeder Wayne Parrott on a new, herbicide resistant, nongenetically modified seashore paspalum turfgrass.

Raymer has found success being innovative in work for which he has a passion.

“I had many opportunities to do breeding for other universities and private companies, but I enjoy working for the University of Georgia,” he said. “I’ve always been committed to the farmers of Georgia and to CAES. I strongly believe in the land-grant mission of UGA. It’s the reason (the college) exists.”