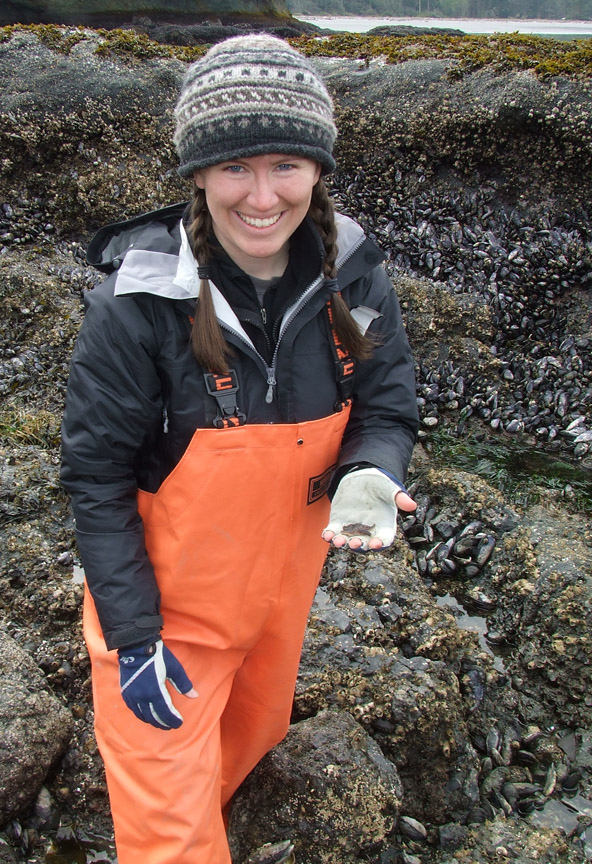 Alyssa Gehman does field exploration on the Olympic Peninsula in Washington. Currently

Athens, Ga. – Two University of Georgia doctoral students are participating in the second round of the SciFund Challenge, an experiment in crowd funding for scientific research. Alyssa Gehman, in the Odum School of Ecology, and Sean Sterrett, in the Warnell School of Forestry and Natural Resources, are raising money from individuals to fund their research.

The SciFund Challenge was founded by two ecologists, Jai Ranganathan and Jarrett Byrnes, to explore the potential of crowd funding—through which interested individuals, usually via the Internet, pool their donations—to support scientific research and connect scientists more directly to the general public. The first round, which took place in November 2011, raised $75,000 for 49 projects. The second round, which runs May 1-31, includes 74 projects.

Gehman seeks to raise $1,200 for equipment she will use in her study of an invasive parasite that infects and castrates mud crabs living on the oyster reefs along the Georgia coast. Sterrett is seeking $5,000 in his campaign to study the roles turtles play in nutrient cycling within aquatic ecosystems.

Mud crabs. Gehman’s project, “A Climate for Castrators?” explores the interactions between the mud crab, Eurypanopeus depressus, and the parasite Loxothylacus panopeus, which first appeared in Georgia coastal waters around 2004.

“This parasite can invade crabs’ bodies and basically take over, using the crab as a baby-parasite-producing machine,” Gehman wrote in her SciFund Challenge project description. Both male and female crabs are vulnerable. When the parasite infects a male crab, it castrates the crab and changes the shape of its body to accommodate parasite babies. “My lab-mates and I have dubbed it ‘the Neuterator,'” Gehman said.

Gehman will be looking at the impact of drought on the interaction between parasite and host. The parasite larvae, which are released into the ocean as free-swimming organisms, can’t survive in fresh or low-salinity water, she explained. That means that estuaries—where river and ocean waters meet and mix—can serve as refuges for the crabs. During droughts, however, estuaries receive less fresh water and become saltier.

“In a nutshell, are we going to see increased occurrence of this parasite in the estuary as drought becomes more and more common?” she said.

“Understanding the environmental determinants of disease is a growing area of research,” said Gehman’s adviser, Jeb Byers, an associate professor of ecology. “It’s particularly understudied in marine ecosystems, which makes Alyssa’s work all the more important.”

“My objective is to better understand turtle ecology in an effort to conserve these valuable creatures,” he said. “I want people to recognize that turtles, along with other aquatic animals, are critical components of freshwater ecosystems, and our rivers and lakes will not be the same without them. Specifically, I want to examine the contributions of freshwater turtles to energy fluxes and nutrient dynamics through nutrient cycling and retention.”

Sterrett plans to estimate densities of the turtles and then assess their diets using natural tracers and fecal samples. He then plans to determine which types of nutrients—and at what rate—are redistributed into habitats through turtle waste. He needs funding help for this last part of his research plan. “Although this is the most expensive part of my project, it is the essential component that should help us understand the roles turtles play in rivers and lakes around the world,” he explained.

Gehman and Sterrett have raised $911 and $3,233 respectively as of May 3 with the help of donors.

Sterrett said he has found the SciFund experiment to be an eye-opener. “It’s remarkable how many generous people worldwide are interested in supporting scientific research on so many levels,” he said.

Gehman agreed. “It really has been amazing to have so many people supporting my work. I don’t think I realized how wonderful it would feel to get this kind of support.”