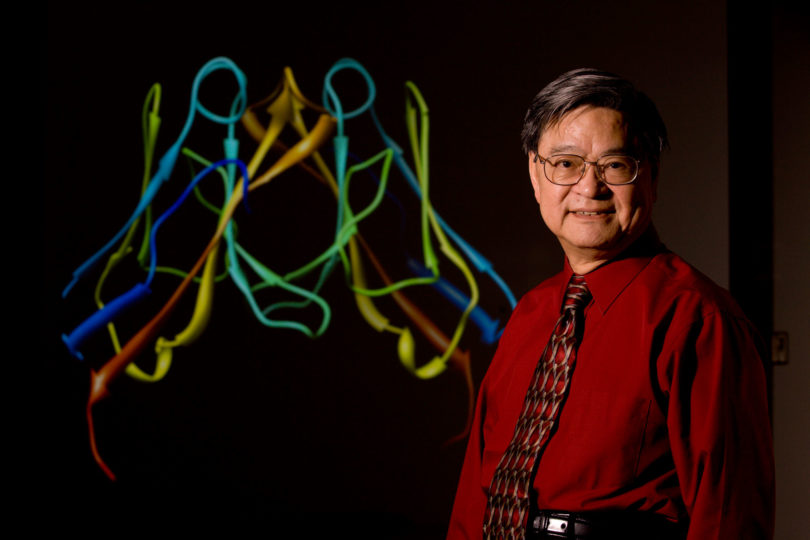 New strategy could lead to dose reduction in X-ray imaging

For more than a century, the use of X-rays has been a prime diagnostic tool when it comes to human health. X-rays also are a crucial component for studying and understanding molecules, and a new approach by UGA researchers may dramatically improve what researchers can learn using the technique.

One of the primary ways scientists can understand molecules is to bombard their crystalline forms with X-ray beams. This allows a crystallographer to discover many things about the molecule, from the arrangement of atoms to the position of chemical bonds. Thus, the techniques of X-ray crystallography have been central to numerous important scientific discoveries in many fields.

Now, a team led by B.C. Wang, Ramsey-Georgia Research Alliance Eminent Scholar in Structural Biology, has shown for the first time that by using multiple data sets, each under-exposed simultaneously, one can produce a composite data set that may give three to five times better signal levels than standard techniques for structural analysis.

This new technique is particularly better than standard procedures when it comes to studying large molecules, many of which are important in drug development and other important processes.

“When compared to crystals of small molecules, macromolecular crystals diffract X-rays poorly and usually tend to have a much shorter lifetime in the X-ray beam,” said Wang. “So a macromolecular crystal can only withstand a certain amount of X-ray dose before it is destroyed as a result of radiation damage. Obtaining accurate and complete diffraction data sets of these crystals is very important.”

The research, published in the online edition of the journal Foundations of Crystallography, could lead to a much more rapid acquisition of knowledge about molecules, Wang said. Authors of the paper, in addition to Wang, include from the Wang lab Lirong Chen, Hua Zhang, Weihong Zhou and Zheng-Qing Fu. Collaborators from the Institute of Biophysics at the Chinese Academy of Sciences in Beijing include Zhi-Jie Liu, Dong Wu and Wei Ding.

X-ray diffraction data on crystals have been steadily improving over the past few decades, but the study of large molecules has continued to present sometimes-intractable problems. One always present issue is that while X-rays can reveal much about molecules, the technique also destroys the molecules, just as too much radiation can be lethal in humans. So the question has persisted: How can we get the same quality of data using a lower amount of total X-ray radiation than what we use now to study molecules?

Wang and his team had the idea of taking what might be called “slices” of radiation dosage to produce multiple scans. The total information from these combined multiple “weaker” scans might then actually surpass what could be found with normal X-ray crystallography with a single stronger scan. In order to see if this actually worked, Wang and his collaborators came up with a theoretical prediction for the strategy and then tested it using six bovine insulin crystals.

“The calculations from the diffraction data of these six insulin crystals collected using two different data-collection systems showed that the data is much better with the MDS strategy than with the regular single-path strategy,” said Wang.

This technique allows researchers to study large molecules with greater depth and understanding by avoiding the use of too much X-ray radiation that would destroy the sample. This could eventually mean that doctors utilizing it could get more information on a patient while using a lower X-ray dose.