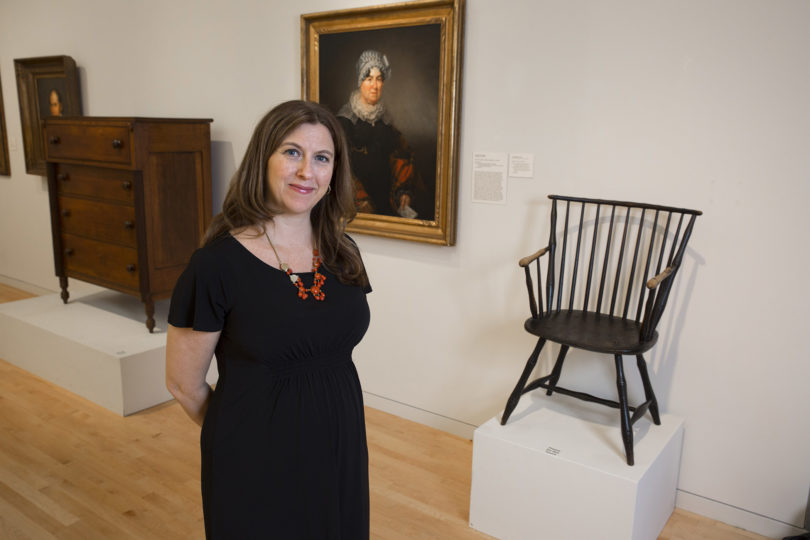 One of Sarah Kate Gillespie's first big undertakings as curator of American art at the Georgia Museum of Art is to spearhead efforts to reinstall the museum's permanent art this summer.

Art museum curators get to tell a story through how works of art are displayed.

The complexity of that story can vary depending on the pieces with which a curator has to work.

For Sarah Kate Gillespie, one of the most intriguing parts about being American art curator at the Georgia Museum of Art is getting to tell a story through such a rich collection of art.

Gillespie became curator of American art at the museum in July; her previous experience includes being an assistant art professor and curator in New York.

One of Gillespie’s first big undertakings is to spearhead efforts to reinstall the museum’s permanent art this summer.

The reinstallation, which will occur in the expanded wing of the museum, involves moving art on display, putting some works into storage and reintroducing other pieces.

Gillespie said that she, along with the museum’s other curators, will examine the museum’s collection of American, European and decorative art and ask some big questions: “What story do we want to tell? Can we tell it differently?”

Before coming to UGA, Gillespie was an assistant professor of art history at York College, City University of New York, where she taught classes on 19th- and 20th-century American art, African-American art and the history of photography. She also has served as the Luce Curator of Fine Arts at the Brooklyn Historical Society and curatorial and research associate at the former Berry-Hill Galleries in New York City.

Coming to UGA from New York, Gillespie is able to bring a fresh perspective to the museum’s collection. Gillespie’s experience in the New York art community also helped her develop connections in the American art world that are valuable for drawing exhibitions and guest curators to the museum.

Gillespie’s specialty is in 19th- and early 20th-century visual culture in America.

“We’re a young nation. Our visual arts are very young,” she said.

With this background, she was excited about the museum’s American collection, which is strong in its stock of 19th-century landscapes and impressionist paintings.

One of Gillespie’s favorite paintings in the collection is “Portrait of Mrs. Catherine Munro, ca. 1818” by Samuel F.B. Morse, an artist best known as inventor of the telegraph and Morse code.

The portrait is simple—the subject dressed in black, red and white stares out from the painting.

Gillespie previously has studied Morse’s daguerreotypes. In addition to Morse’s other talents, Gillespie said, “He was a gorgeous portraitist.”

Like all curators at the museum, Gillespie is looking for ways to connect with other faculty on campus particularly for bringing UGA students from various disciplines to see the artwork.

“We really think of ourselves as a teaching museum,” she said.

History classes frequently visit the museum. But since art can intersect with nearly any discipline, including the sciences, Gillespie said she welcomes the opportunity for any instructor to find learning opportunities at the museum.

Looking forward, Gillespie has ambitious plans for the museum when it comes to the display and conversation of American art.

“We should think big,” Gillespie said of the museum. “There is no reason why we cannot become a center for the study of the interpretation of American art in the Southeast.”

Right now, she said, there really isn’t such a center in the South focusing on American visual art, though the Georgia Museum of Art is a leading museum in American decorative arts.

As curator, Gillespie said, her job toward building the museum’s reputation begins with developing nationally important shows that can tour to other institutions.

Given its association with the university and its existing resources, the museum certainly is poised to become a leader in American visual arts.

Gillespie said, “We have the collection to do it, and we have the education infrastructure as a resource.”