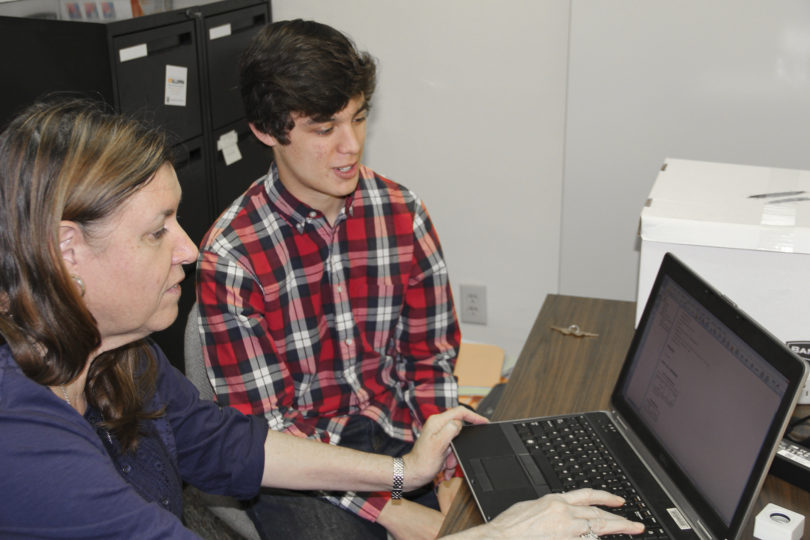 For second-year student Blake Mathews and hundreds of other students at UGA, the new CURO Research Assistantship has provided the kind of experiential learning opportunities that only a major research university can offer.

Mathews, an economics major in the Terry College of Business, is analyzing data on financial stress in students under the mentorship of Professor Brenda Cude in the College of Family and Consumer Sciences.

“It’s been exciting for me to work with the data I was given and try to use my research in order to make sense of all of it,” Mathews said. “It necessitates a kind of divergent thought that is hard to find inside the classroom.”

The CURO Research Assistantship provides a $1,000 stipend to 250 outstanding undergraduates who work alongside faculty on research projects. It was launched this fall as part of a series of academic enhancements announced by UGA President Jere W. Morehead and Provost Pamela Whitten. The CURO Research Assistantship expands on the highly successful Center for Undergraduate Research Opportunities at UGA, which is administered through the Honors Program but is open to all students.

UGA is one of the few institutions nationwide that gives undergraduates the opportunity to engage in research as early as their first semester. Williams noted that numerous studies have linked participation in undergraduate research with positive learning outcomes such as increased problem solving ability, higher GPAs and more timely graduation.

When Williams was named Honors Program director a decade ago, CURO participation was limited to Honors students. CURO began serving all students in 2010, and the expansion has increased participation by 20 percent.

“At last year’s CURO Symposium, not only did we break 250 presenters, but 40 percent of them were non-Honors students,” Williams said. “That took a lot of effort on a lot of people’s part, but it also took a lot of buy-in from faculty and students.”

‘More access, more opportunities’
The expansion of CURO is one of the many ways in which the Honors Program supports campus-wide academic priorities. The Honors Program coordinates student applications for major scholarships, which has helped dramatically increase the number of highly competitive awards that UGA students receive. UGA had three recipients of the U.S. Student Fulbright Scholarship in 2004, for example, but this year had 14. Over the past decade, UGA students-all but one of whom were Honors students-received 51 Rhodes, Marshall, Mitchell, Gates Cambridge, Goldwater, Truman and Udall scholarships.

“The success of our students in earning nationally and internationally competitive scholarships really sets the University of Georgia apart, and it reflects the quality of our students and comprehensive range of world-class learning experiences that our Honors Program provides,” Whitten said.

Private support has played a significant role in expanding the opportunities that the Honors Program provides. Over the past decade, the Honors Program has raised more than $7 million in gifts and pledges that have supported travel-study opportunities and funded scholarships. The Foundation Fellowship, the university’s premier undergraduate scholarship, now attracts students to UGA from across the nation and from around the world.

Honors students also have the opportunity to intern through signature programs in Washington, D.C., New York and Savannah, and the past decade has seen the establishment of new career development and civic engagement programming. The business-oriented Corsair Society, for example, has placed more than 100 UGA students in full-time analyst positions in top-tier investment banks and management consulting firms, making UGA one of the most well-represented public universities on Wall Street. Students can participate in tutoring and mentoring programs for local school children through the Thomas Lay After School Program and MathCounts, and the Honors Program helps students build a sense of community through book discussions in faculty members’ homes and strong peer, faculty and alumni mentoring networks.

Williams emphasized that, at its core, the Honors Program aims to give students learning opportunities that enable them to reach their full potential. The Honors Program sponsors a chapter of the Roosevelt Institute, a student-run think tank, that helps make applications for scholarships such as the Rhodes and Truman more competitive, for example. Similarly, engaging in undergraduate research gives students an edge as they apply for competitive scholarships, apply to graduate school or begin their careers.

“Ten years ago I hoped that we would end up in a situation where students would have so many opportunities that no one Honors student could do it all,” Williams said. “We weren’t there then, but we are now.

“I’m often asked what I want to see next for the Honors Program,” he added. “I want to see more students have more access to more opportunities.”