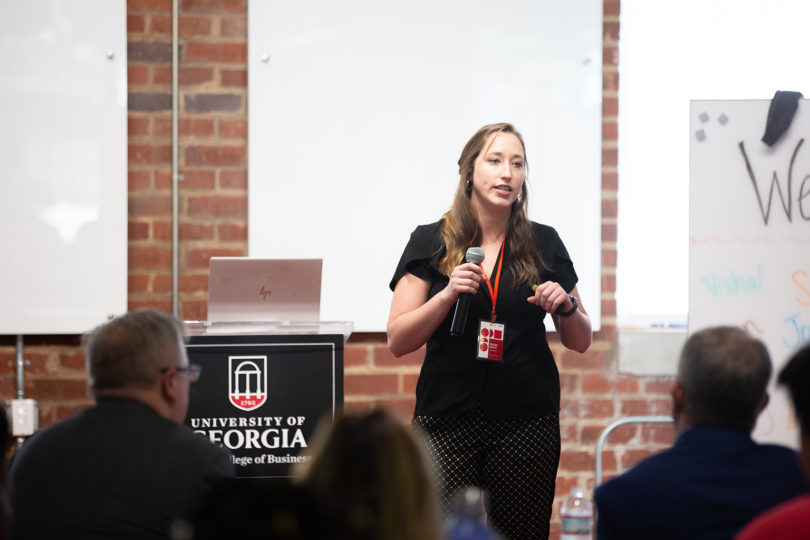 Baylee Marsh, founder of Baylee Bakes, pitches her business to a panel of judges during the 2019 Summer Launch Competition on Aug. 8 at Studio 225 in Athens. (Photo by Matt Hardy)

Baylee Bakes, the brainchild of fourth-year advertising major Baylee Marsh, began in September 2018 and has since sold 800 dozen cookies. Marsh started the company as “kind of an accident” and wasn’t a big baker before she launched her venture.

“I started an Instagram account as my creative outlet because I made cookies for fun, and then someone emailed me and said, ‘Hey, can I order some cookies,” said Marsh, a Grady College of Journalism and Mass Communication undergraduate who loves event planning. “I’ve never really baked cookies in my life, and I didn’t tell her that, but I said, ‘Yeah I can make you some cookies.’ So I did and posted them on Instagram and got so many messages that I kept receiving orders and orders every week. I said I can’t not do something about this.”

In awarding her the top prize, the judges noted a key reason for her win was she already had a viable business.

“It has great potential, you have proven revenue, you’re doing this, and it’s a real business,” said Terry College of Business alumnus Teak Shore, owner of Southern Lighting Source. “One of the things we were most impressed with is you’re pulling this off while you’re still in school.”

Marsh never thought much about entrepreneurship before her business started, but turned to the UGA Entrepreneurship Program to further her endeavors. She participated in the program’s spring Idea Accelerator, which helped her turned a fun idea into a burgeoning business. In June, she brought in $9,000 in revenue on a product she makes a 91 percent profit margin on.

“My company kept growing and growing, and it was so much I couldn’t handle it, so I came [to the Entrepreneurship Program], did the Accelerator and fell in love with it,” she said. 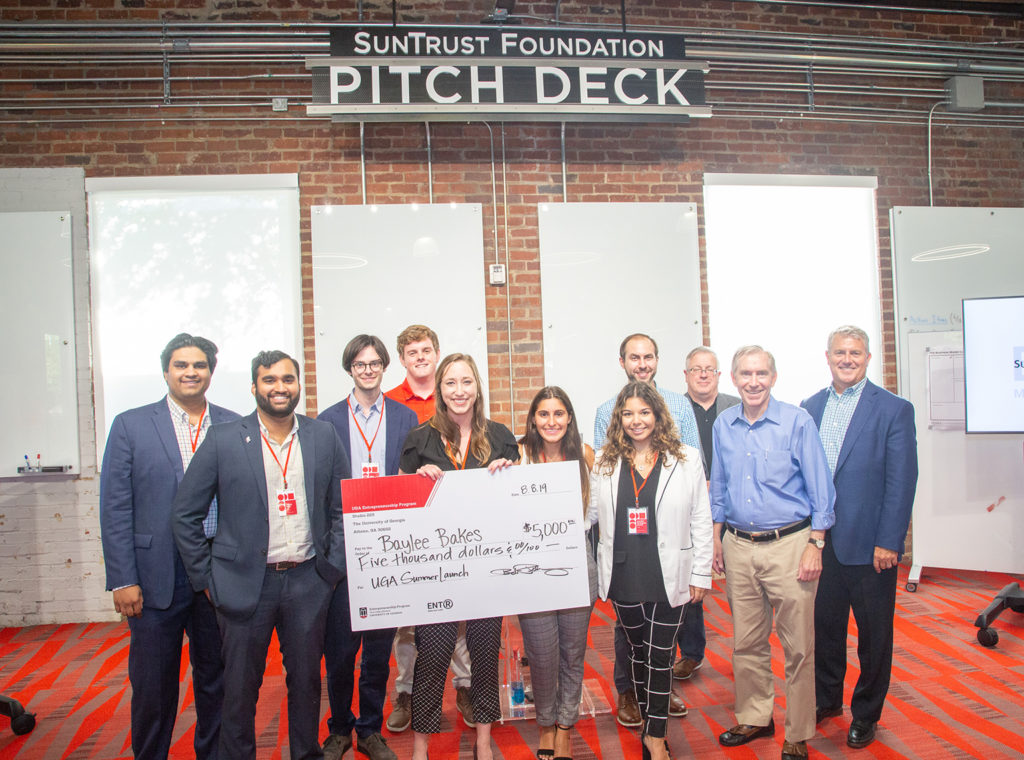 The pitch competition, which marked the culmination of an eight-week boot camp featuring eight UGA student businesses, was full of “sharp” ideas, Shore said, adding there were businesses the judges wanted to try themselves. Ryze, a company that helps investors analyze and advance their bitcoin portfolio, took second-place honors. It was created by Terry College student Srikar Komanduri, Terry graduate John Zay and School of Public and International Affairs graduate Abhay Aluri.

Paggo, which bills itself as a mobile work closet, was created by 2019 Terry College graduates Lee Setty and Josefina Rodriguez Sturba and finished in third place.

“We want to thank all the teams. What a great program you are part of at the university,” Shore said. “You are doing great things. Even if you didn’t get picked here, just keep pushing. The key to entrepreneurship is being scrappy and keep going.”

The five other businesses were:

The UGA Summer Launch is sponsored by the UGA Entrepreneurship Program, whose mission is to help develop the mindset of future entrepreneurs and prepare students for business leadership roles. It provides a comprehensive academic program that encompasses experiential learning and equips students with the tools and resources to pursue their own startup ventures.

Studio 225 serves as a focal point for student innovation and a place for potential collaborators to meet. The Summer Launch, now in its third year, is also conducted with support from the Advanced Technology Development Center.