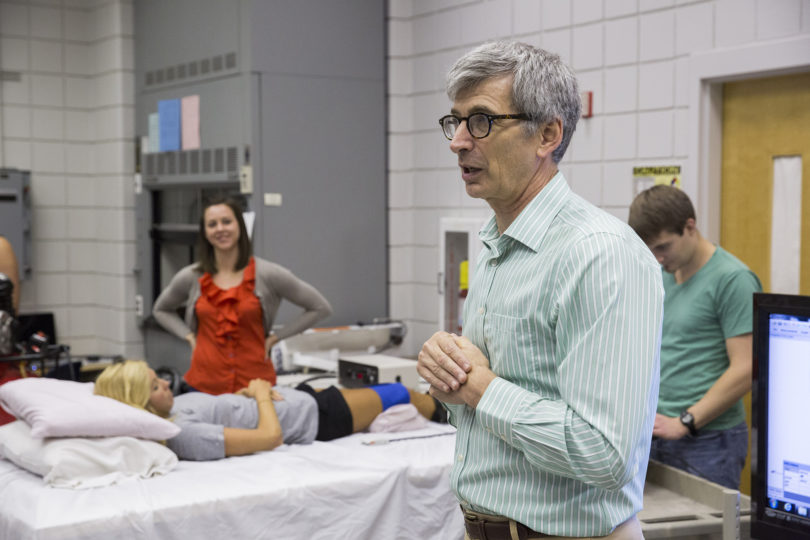 Professor Kevin McCully leads a demonstration of the Mito Test in the Muscle Mitochondria Lab at the University of Georgia's Ramsey Center. Melissa Erickson

Athens, Ga. – Patients with cystic fibrosis have a muscle deficiency that gets worse with age, according to the findings of a joint study by researchers at the University of Georgia and Georgia Regents University. The study was the first time that the Mito Test, a testing device developed by researchers at UGA, was used on children.

The study, conducted as a partnership between the kinesiology department at the UGA College of Education and Georgia Regents University, measured the oxygen capacity of muscles in patients age 7-42. Oxygen capacity is an indicator of muscle strength and health, and results showed cystic fibrosis patients had 15 percent less capacity than the control group-and that capacity grew worse with age.

Cystic fibrosis is a genetic disease that primarily affects the lungs and digestive system of about 30,000 Americans, producing mucus that makes it difficult to breathe and digest food. The average life span of a patient with cystic fibrosis is less than 40 years.

By including children in the study, researchers opened a door to similar tests on a range of childhood diseases. The Mito Test uses near infrared spectroscopy, a special type of light beamed through the skin, to measure the oxygen levels in muscle mitochondria. Because it is a non-invasive test relying on sensors placed on the skin, it is easier to administer than traditional methods to measure muscle capacity, such as MRIs or biopsies.

“This is the first time we could test on children, which is groundbreaking for us,” said Kevin McCully, one of the authors of the study and a professor in the UGA College of Education’s kinesiology department. “We did find there was evidence of muscle impairment, and it gets worse the older you get. This is a new development.”

The study, which is published in the April issue of Experimental Physiology, points to this decrease of muscle strength as one reason why cystic fibrosis patients are less likely to exercise as they get older, complicating their health problems. McCully, who developed the Mito Test, said the excessive muscle weakness that is common in cystic fibrosis patients now can be attributed to some degree to defects in muscle mitochondria.

McCully and other UGA researchers will continue to work with Georgia Regents University to determine what is keeping cystic fibrosis patients’ muscles from properly functioning, as well as use the Mito Test in Athens, Augusta and elsewhere to study other childhood diseases that may affect muscle mitochondria.

“This is the start of a collaboration; we agree there is something in the muscles that accumulates,” said McCully, noting the shortened life span of cystic fibrosis patients. “We’re interested in optimizing that life, and if their muscles are affected, they’re not optimizing their life.”