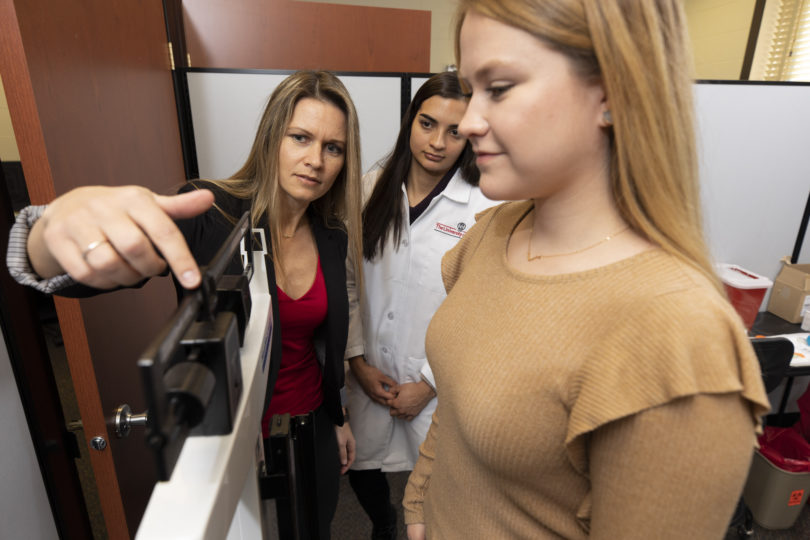 Researchers at the University of Georgia have shown that a simple intervention – daily self-weighing – can help people avoid holiday weight gain.

Participants in a 14-week UGA study who weighed themselves daily on scales that also provided graphical feedback showing their weight fluctuations managed to maintain or lose weight during and after the holiday season, while a control group gained weight.

Researchers speculate that participants’ constant exposure to weight fluctuations – along with being able to see a target or goal weight line (their baseline weight) – motivated behavioral change that led to weight maintenance, or in the case of overweight subjects, weight loss.

“Maybe they exercise a little bit more the next day (after seeing a weight increase) or they watch what they’re eating more carefully,” said study author Jamie Cooper, an associate professor in the department of foods and nutrition within the UGA College of Family and Consumer Sciences. “The subjects self-select how they’re going to modify their behavior, which can be effective because we know that interventions are not one-size-fits-all.”

After determining their baseline weight prior to the holidays, participants in an intervention group were told to try not to gain weight above that number, but with no additional instructions as to how to accomplish this goal.

Participants in the control group were given no instructions. A total of 111 adults between the ages of 18 and 65 participated in the study.

Michelle vanDellen, an associate professor in the UGA Department of Psychology and second author on the paper, said the findings support discrepancy theories of self-regulation.

“People are really sensitive to discrepancies or differences between their current selves and their standard or goal,” she said. “When they see that discrepancy, it tends to lead to behavioral change. Daily self-weighing ends up doing that for people in a really clear way.”

Daily self-weighing also has been shown to be effective in preventing weight gain in college freshmen in previous research, but researchers wanted to apply it to another historically dangerous time for weight gain.

With the average American reportedly gaining a pound or two a year, overeating during the holiday season has been identified as a likely contributor to small weight gains that add up over time and can lead to obesity.

“Vacations and holidays are probably the two times of year people are most susceptible to weight gain in a very short period of time,” Cooper said. “The holidays can actually have a big impact on someone’s long-term health.”

Cooper said future research may investigate if daily self-weighing alone – without the graphical feedback – is the driving force behind the behavioral changes that led to weight maintenance.

The fact that subjects knew researchers would be accessing their daily weight data also could have contributed to behavioral change, she said.

What seems clear is the intervention is effective, largely because of its simplicity and adaptability.

“It works really well in the context of people’s busy lives,” vanDellen said. “The idea that people might already have all the resources they need is really appealing.”

The paper, “Daily self-weighing to prevent holiday-associated weight gain in adults,” can be viewed at  https://onlinelibrary.wiley.com/doi/10.1002/oby.22454

Sepideh Kaviani of the University of Georgia is first author on the paper.