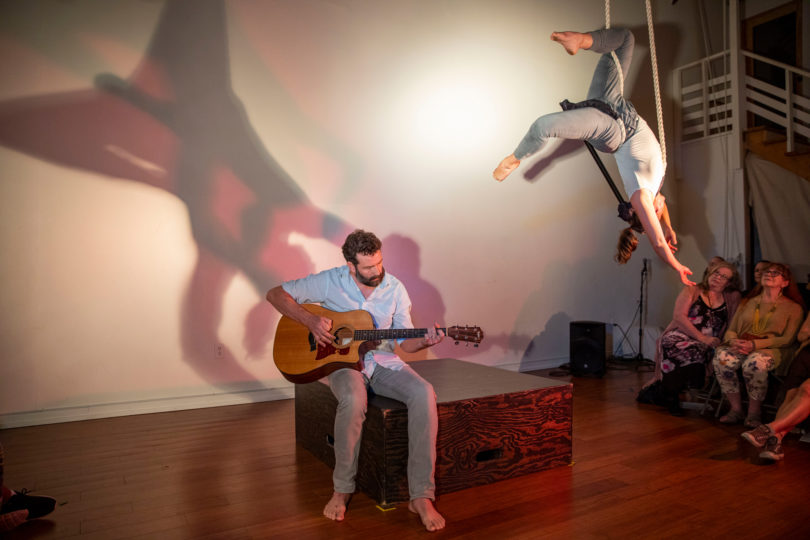 Brent AB '04, MSW '12 and Timera Temple's AB '05, MS '11 "Stranger Formation" mixes music, spoken word, improv, acrobatics, and creative moment to tell a whimsical story that was centerpiece of the most recent iteration of the Small Box Series, one of Athens's newest and most exciting artistic offerings. (Photo by Chad Osborn/UGA)

Timera Temple is a bit of a carpenter.

Actually, Temple is a lot of things. She is an artist, entrepreneur, dancer, choreographer, acrobat, and a mother of four. She’s a busy person but not so busy that she can’t make time for a friend.

“Lisa knows I like to build things,” says Temple AB ’05, MS ’11. That’s Lisa Yaconelli, a dancer and choreographer who has been a staple of the Athens arts community for some 15 years.

On a 2016 trip to the West Coast, Yaconelli attended a performance in Portland called Ten Tiny Dances. It featured performers who created live works on 4-by-4-foot raised stage. That event, along with a house show by her brother in California, inspired Yaconelli to combine the two ideas in Athens. She envisioned a small stage incorporating music, dance, and poetry with a casual community feel.

“Lisa asked me to build her a box,” Temple recalls. “So, I went to my dad’s wood shop in Royston and got to work.”

The box Temple built, a sturdy 4-by-4 hollow hunk of wood with handles, is a marvel of simplicity that carries an enormous amount of symbolic power. It is the focal point of the Small Box Series, one of Athens arts community’s newest offerings, and one that perfectly blends every aspect of the UGA community—alumni, faculty, students, and staff—with the wider community beyond.

Why a box? Yaconelli says that many of the Small Box Series’ founding members had kids and were very busy when they began. “The box made choreography and creation feel possible,” she says. “It was the size of a space in our kitchens or living rooms. It gave us a way to make art even though our lives were so crowded.” 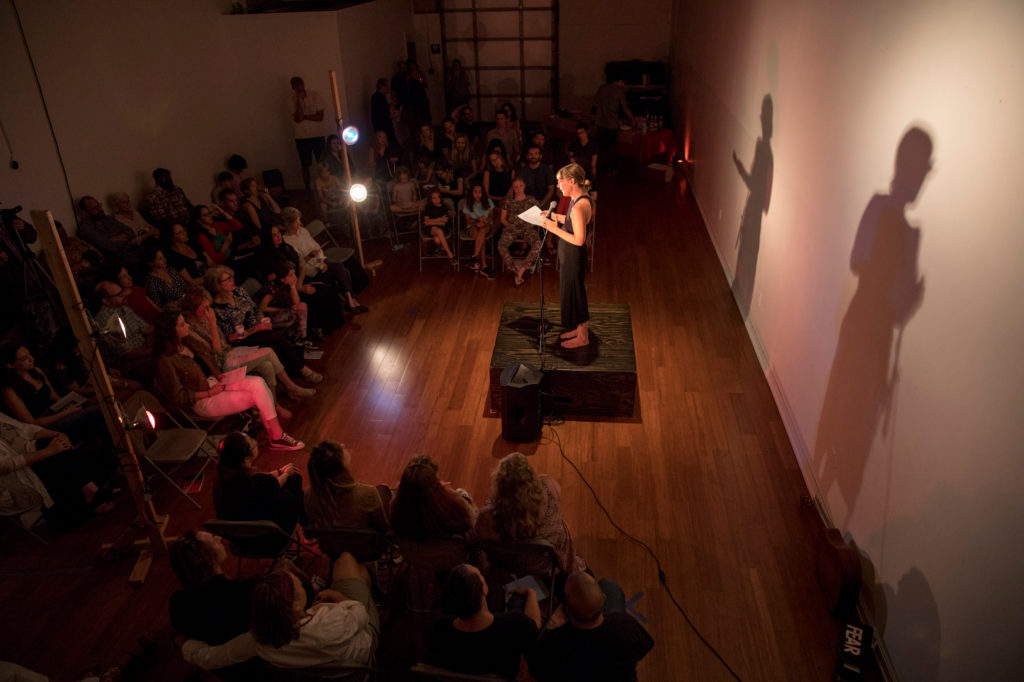 Small Box Series co-founder Lisa Yaconelli greets the standing-room-only crowd. The Small Box itself, located under her feet, does its job flawlessly. (Photo by Chad Osburn/UGA)

“Small Box is really all ages, all access,” says Rebecca Gose, associate professor of dance in the Franklin College of Arts and Sciences. She has performed at several Small Box Series events, including the most recent one in September. “There aren’t questions about who is an artist and who isn’t. Instead, the question is ‘what do you have to say?’ That 4-by-4 box is a great equalizer.”

Since its debut in October 2016, the series has encompassed all of the creativity, edginess, and quirkiness the Classic City’s art scene has offered for years all wrapped up in a neat, um, box. The series and its founders—including UGA associate professor and alumna Anne Shaffer AB ’98, alumnae Jennifer Tweed Morlock BS ’97 and Laura Glenn AB ’96, and Amanda Martin—were featured in the documentary “Athens Rising” about the art scene in Athens, and for the first couple of years, shows popped up in eclectic spaces all over town—side rooms of downtown businesses, bars, a yoga studio with a tree growing in the middle of it, and even someone’s backyard.

Recently, though, the series may have found a permanent home at NIMBL, a dance studio and small, versatile performance and meeting space in Athens’ warehouse district just north of the loop off Chase Street. Yaconelli co-owns the spot with Laura Hoffman MLA ’05 and Maryn Whitmore BSEd ’01, who are also frequent Small Box performers. When set up for Small Box, the NIMBL space comfortably fits about 100 attendees, which is the perfect size for the event.

To get tickets for this weekend’s show, visit smallboxseries.bigcartel.com

“The Small Box Series offers a really wonderful focal point where an unbelievable range of people drift in. They have a moment, they do their thing, then drift out,” says Brent Temple AB ’04, MSW ’12, Timera’s husband and performing partner. But before they drift out, they leave one heck of an impression. 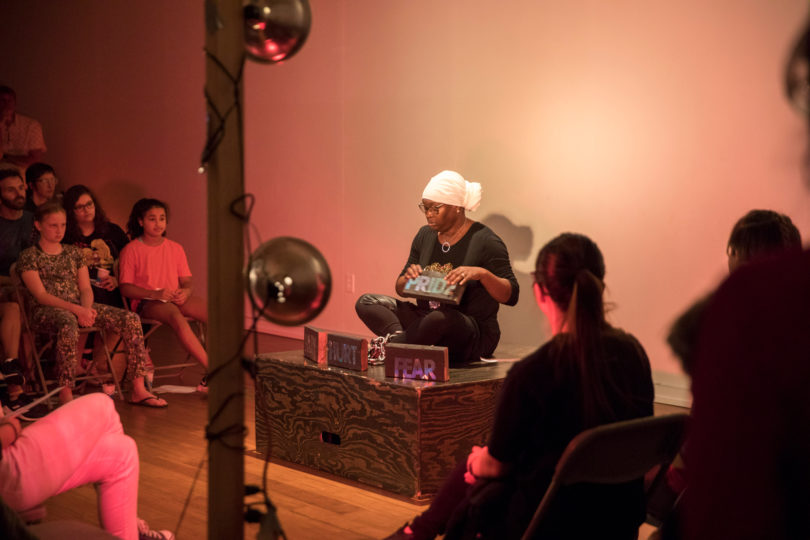 Aesia Cade-Brown kicked off the night with her spoken word performance, “Where’s the Heart?” (Photo by Chad Osburn/UGA) 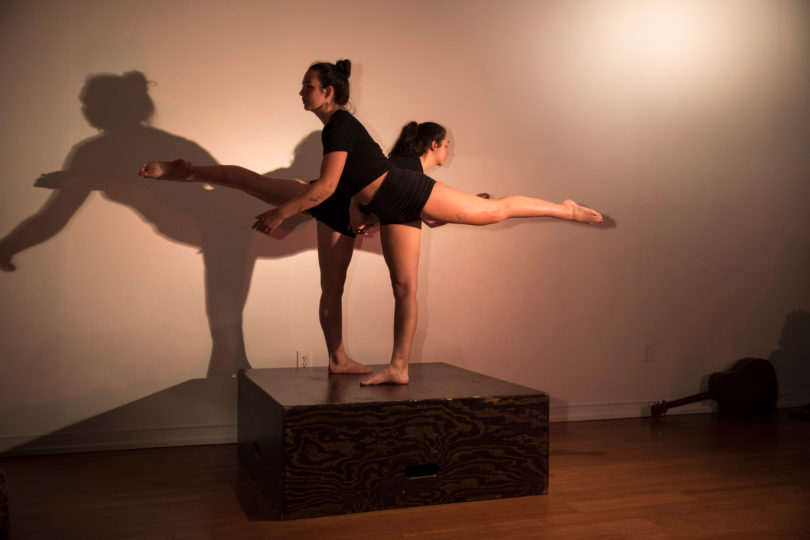 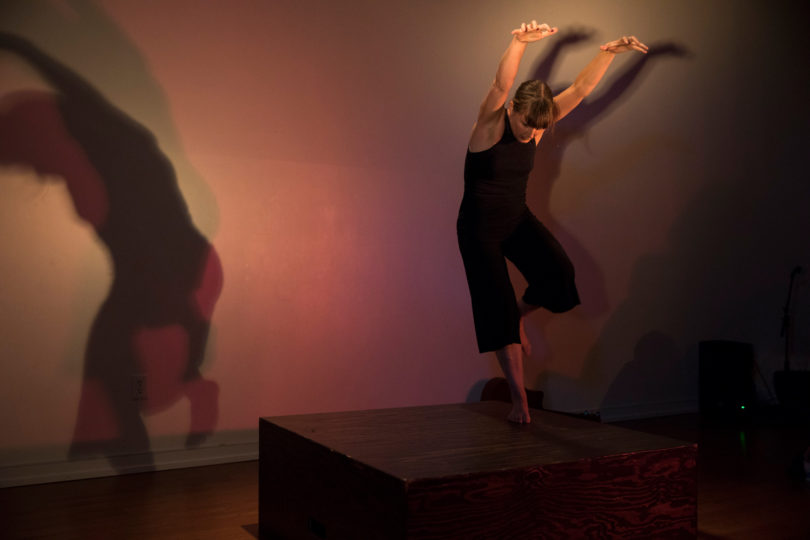 Lisa Yaconelli, a dancer herself, took to the Small Box for her movement piece, “Breadcrumb House.” (Photo by Chad Osburn/UGA) 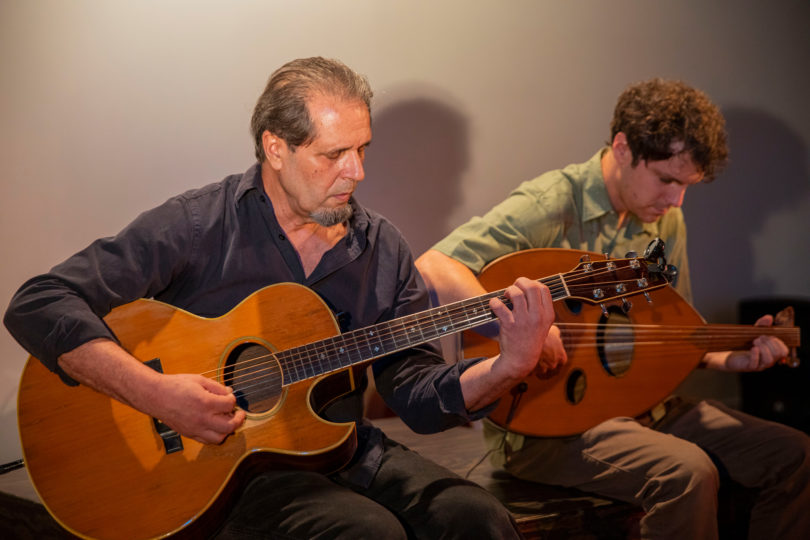 To kick off the most recent Small Box event, Aesia Cade-Brown delivered a spoken-word performance while seated on the box. Sisters Ari and Mara Bastow danced around and on top of it. Joseph Leone BSA ’75 of Atlanta made his Small Box debut, first performing solo with his guitar while standing on the box, and then in a duet with Jeremy Roberts, who wielded an oud, an instrument that resembles a lute. For that, they sat on the box’s front edge. Yaconelli also danced, never leaving the 16-square-foot stage.

The Temples’ performance was a showstopper. Brent sat on the box, singing songs and relating an off-the-wall (and true) story about a street person in London conning him out of money for ice cream. Timera performed in tandem on a trapeze above the box, improvising her aerials to play off not just her husband’s delivery but the crowd’s reaction.

“I don’t even know what I was doing,” Brent laughs, understating his contribution. “She was framing the performance and giving it value. At one point, I heard someone chuckle and then the room just opened up. The audience was just buoyant and supportive.”

For the final performance of the evening, the tone was markedly different—although in the end, the audience was just as supportive but mesmerized in an entirely different way.

“This is going to be therapy and art mixed together. I hope you are up for it,” Gose remembers telling Yaconelli when they were discussing “This Too Shall Pass,” the premiere of a modern dance performance she created to honor her mother, Alice, who passed away in February 2018.

Unlike the other artists that evening—unlike any artist who has ever performed at Small Box, in fact—Gose did not stand or sit on the box. She turned it on its side and used it as a shadow box. Family photos and films of her mom’s life were projected onto it. Gose did lean on or at times touch the box with her hand to spellbinding effect during her performance.

Andrea Trombetta AB ’99, MFA ’05, a frequent Small Box performer, took the lead on designing the elaborate set. It included recipes in Gose’s mom’s handwriting blown up to make a background collage and a variety of furnishings from her home. On top of the Small Box sat a blue purse.

“That purse was by her bedside when she died,” Gose said. “It still has her wallet and everything in it. That purse went everywhere with her. It haunted me. I didn’t know what to do with it. So, eventually, I made it into an art piece. It changed the connotation.”

Gose describes “This Too Shall Pass” as part of the therapeutic process of dealing with her mom’s death. On this night, there were about 100 other people to help her get through it too.

At times, Gose’s performance narration was funny, sad, frustrated, poignant, full of longing, and sometimes all of those at once. As she danced, Gose’s movements deepened the story, utilizing every inch of the space. If an audience member’s eyes left her even for a second, it was to dart over to the loop of photos and images flashing onto the Small Box. When it was over, the crowd, which had been pin-drop silent, burst into applause.

Afterward, all of the artists stuck around to talk with friends and other fans. Kids darted back and forth, finally getting to release some energy after having bottled it up for nearly 90 minutes. (One neat aspect of the Small Box Series is that it’s for all ages. While some of the content may be heavy, the presentation rarely is.)

The next Small Box Series performance, the 12th since its debut, is scheduled for NIMBL in early 2020, and it’s already being planned. According to the Facebook promotion, there will be a whole slate of new artists, including more UGA alumni, along with “humor, honesty, melting glaciers, broken bodies, old friendships, and mustached rodents.”

Yep, that Classic City quirkiness is alive and well. 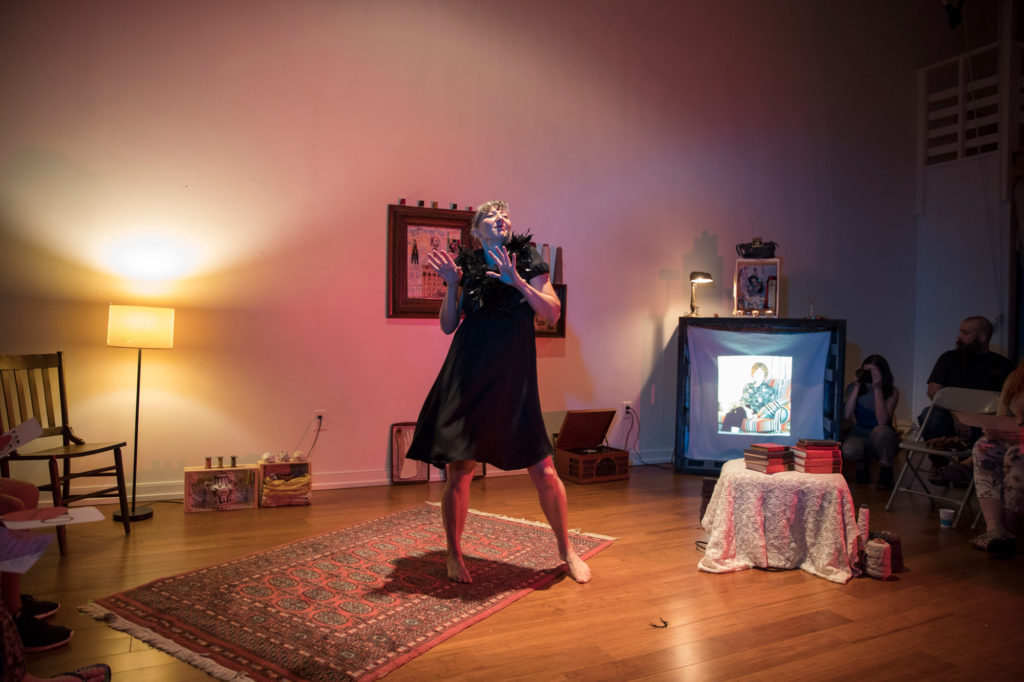 Rebecca Gose, associate professor of dance, created “This Too Shall Pass,” a modern dance to help her tell the story of her mom, who died in 2018. All of the elements on stage came from her home. One of the most meaningful is her purse, which was at her side when she died. It is on top of the Small Box–used as a shadow box for the performance. (Photo by Chad Osburn/UGA)