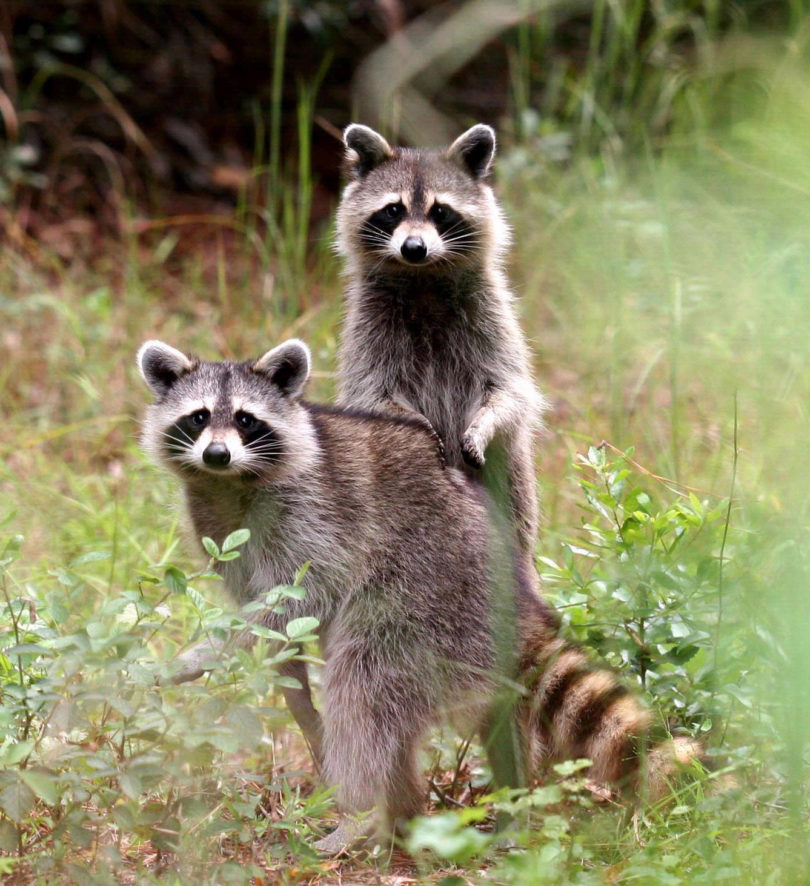 Baylisascaris procyonis can spread from raccoons to other wildlife

Athens, Ga. – A deadly raccoon parasite that can cause severe neurological problems in infected hosts has been popping up in the South, and seven new cases of human infection in the U.S. have been documented in the last two years alone.

Although this “raccoon roundworm” was believed to cause severe problems and even death in people who become infected, a new University of Georgia study shows that’s not always the case. Researchers found that people with frequent contact with raccoons who have a higher risk of becoming infected with Baylisascaris procyonis-such as wildlife rehabilitators-did test positive for the parasite but weren’t showing any symptoms.

“This suggests that not all infections with this parasite lead to severe disease,” said Michael Yabsley, a professor with the Southeastern Cooperative Wildlife Disease Study housed in the UGA College of Veterinary Medicine. “This is in contrast to what has been previously reported for most diagnosed patients.”

Yabsley, who also has a joint appointment with the UGA Warnell School of Forestry and Natural Resources, worked with several other researchers on the new study, recently published in the Centers for Disease Control and Prevention’s journal, Emerging Infectious Diseases.

Baylisascaris procyonis can spread from raccoons to other wildlife, dogs or humans. Animals become infected by either rooting through raccoon feces containing the parasite eggs or eating an infected animal.

This parasite hasn’t been commonly found in the southeastern U.S., with most infections in the region being detected in raccoons in the Appalachian region. However, in recent years the parasite has been found throughout Florida and in parts of Georgia, and it recently caused the death of two beavers at an Athens-area zoo after raccoons entered and contaminated their enclosure with feces.

After an animal or person swallows Baylisascaris eggs, microscopic larvae hatch in the intestines and then move into the bloodstream, causing damage to tissues as they grow. Symptoms of an infection in humans include nausea, liver enlargement, loss of coordination, loss of muscle control and blindness.

Human infections are rare, but children or those who are more likely to ingest dirt or animal waste have a higher risk of acquiring the parasite. Those diagnosed with pica disorder, which compels people to eat substances that contain no nutrition, such as ice, dirt, hair or paint, are also at risk.

Raccoons have a tendency to treat porches and stacked firewood as a restroom, Yabsley said. People can touch the firewood or children can crawl through the animal waste and become infected after putting their contaminated fingers in their mouths.

Although there were only 22 confirmed cases of human infection of Baylisascaris between 1973 and 2010, another recently published study in the CDC’s Morbidity and Mortality Weekly Reports reported seven new human cases diagnosed over just the past two years.

Yabsley is a co-author of this study as well.

Baylisascaris infections can be difficult to diagnose, especially if physicians do not know about a past exposure to items potentially contaminated with raccoon feces or when these cases occur in areas where the parasite is uncommon, Yabsley said.

The recent report in the Morbidity and Mortality Weekly confirmed human Baylisascaris procyonis infections in California, Ohio, Oklahoma, Massachusetts, Minnesota and Virginia. All the patients survived, Yabsley said, but some had severe neurological complications.

In the past, most human Baylisascaris infections proved fatal, but it is possible that more rapid diagnosis and treatment improved the outcomes of the recently reported cases. Regardless, raccoon roundworm can be extremely dangerous to humans, and the prognosis is typically poor.

Yabsley and other UGA researchers worked with the CDC to determine the prevalence of raccoon roundworm exposure for people who work closely and frequently with wildlife, particularly raccoons. Their results show that out of the 347 wildlife rehabilitators who participated in the study, 24 of them tested positive for Baylisascaris antibodies.

“This would seem to contradict the severe disease typically associated with Baylisascaris infection,” said Sarah Sapp, a graduate student working under Yabsley in UGA’s Department of Infectious Diseases. “But we believe that these presumably healthy adults were exposed to low numbers of eggs, in contrast with children who may ingest large numbers of eggs by ingesting raccoon feces or items contaminated with feces.”

Researchers could not determine how each of the rehabilitators was infected, although most said they had various degrees of contact with raccoons. However, researchers did find that those who tested positive had inconsistent use of gloves and handwashing, both of which can minimize the risk of transmission.

Because the parasite is acquired by ingesting raccoon feces, prevention of human cases is relatively easy. Avoid contact with raccoon waste, wear gloves when working with animals or their feces, and wash your hands thoroughly with soap and water. But this is a problem for young children, Yabsley said. They should be watched to ensure they do not put feces in their mouths while playing on porches, around wood piles, or in sand boxes.