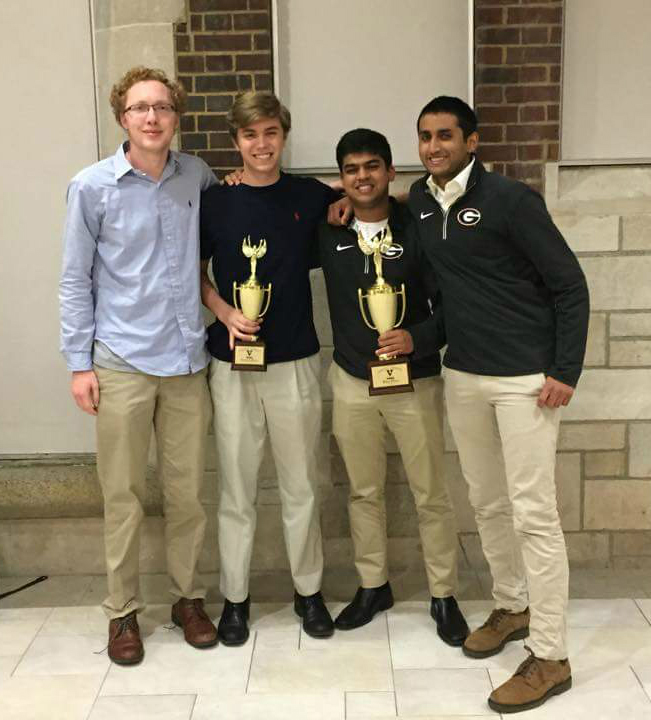 Athens, Ga. – The Georgia Debate Union, which organizes and fields competitive policy debate teams at the University of Georgia, emerged victorious at the 2015 Vanderbilt intercollegiate debate tournament held in Nashville, Tennessee. The tournament featured over 50 teams from nearly 20 colleges and universities. Two teams representing the Georgia Debate Union “closed out” in finals, meaning they won each respective side of their elimination round brackets and tied for first place at the tournament.

Teams from the same school typically do not debate each other.

The team of Swapnil Agrawal, a freshman from Chamblee, and Advait Ramanan, a freshman from Columbia, Maryland, won all but one of its debates, including wins over Emory, Kentucky and Florida. Agarwal earned eighth speaker at the tournament, while Ramanan earned ninth speaker.

“The Vanderbilt tournament has typically featured tough competition from the Southeast—Emory, Florida, Wake Forest—and this year featured teams from the Midwest like Michigan and Minnesota, which added to the quality of the field,” said Hays Watson, head debate coach at UGA. “Our young squad had a very productive few weeks preparing for the tournament—completing research assignments, giving practice speeches, leading squad strategy discussions.”

The Georgia Debate Union will be attending intercollegiate debate tournaments at Harvard University, Liberty University and Wake Forest University over the course of the fall semester.

“The Georgia Debate Union has been one of the more successful debate programs in the country for many years,” said Edward Panetta, professor and head of the department of communication studies. “Dating back to the 1950s, students have learned both research and advocacy skills in a program that has been a successful laboratory and has trained generations of business and public leaders.”

The UGA program has qualified teams for the National Debate Tournament—the equivalent of the NCAA basketball tournament—for 26 consecutive years, Panetta said. “The 2015-2016 team is a young squad that is representing the university with distinction.”