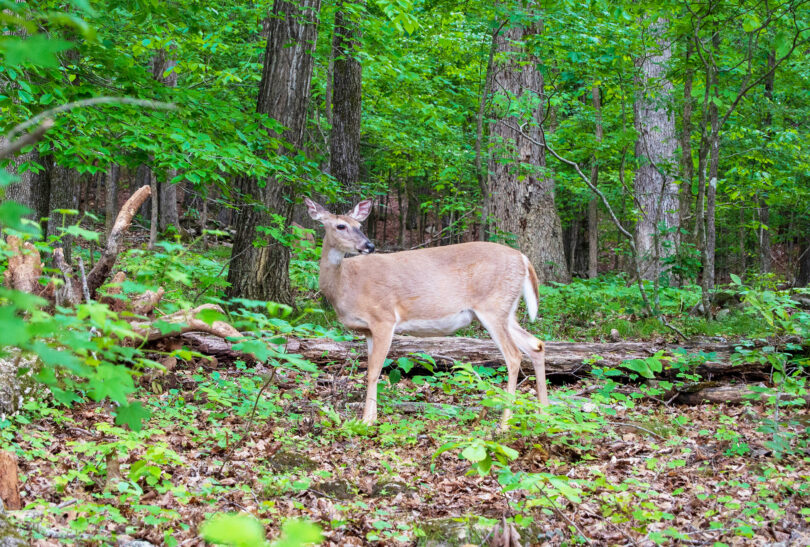 Deer populations in the North Georgia mountains have dropped by almost two-thirds over the past few decades, according to new research by the University of Georgia.

This decline has also led to a precipitous drop in deer hunting—68% fewer hunters head into the woods now compared with statistics gathered in 1979. And today, 75% of hunters leave the woods without a deer. 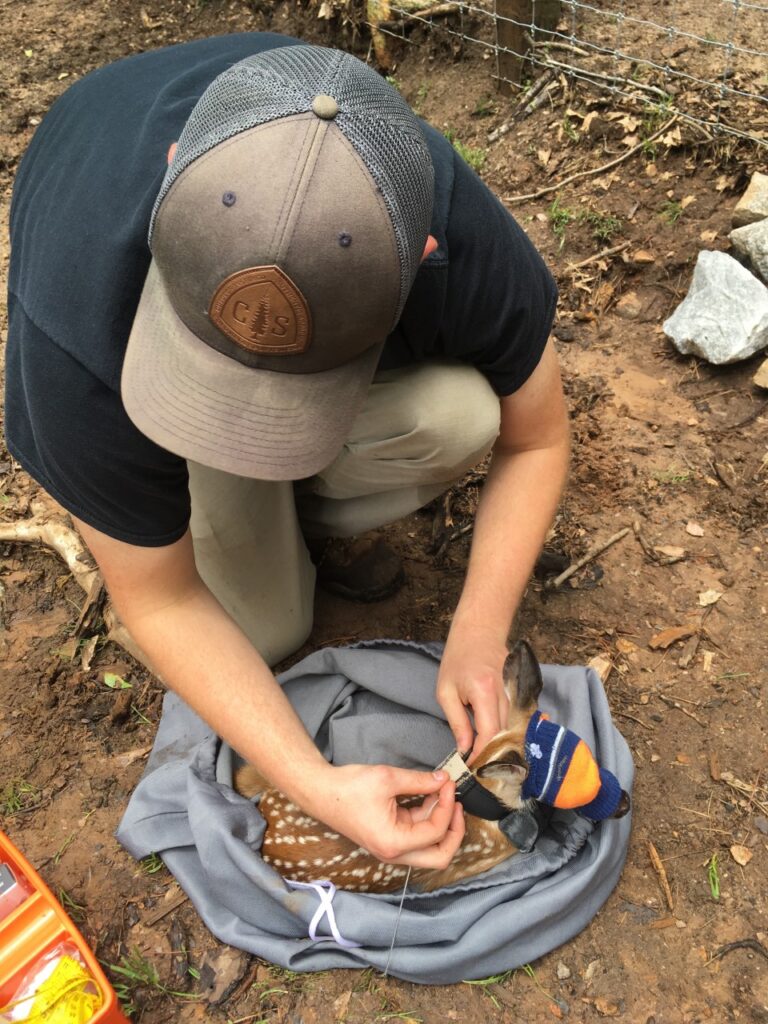 A University of Georgia researcher places a collar on a fawn in the North Georgia mountains. A study recently published points to forest management practices that may be causing fewer fawns to survive to adulthood. (Photo courtesy of Jacalyn Rosenberger)

Not only does this decline contribute to economic and recreational issues across North Georgia communities, said study author Jacalyn Rosenberger, a recent graduate of the UGA Warnell School of Forestry and Natural Resources, but it points to larger issues of forest management in the Chattahoochee National Forest, where study data was collected. The study was published in the December edition of the Wildlife Society Bulletin.

“The thing is, it’s a fixable problem. Yes, deer populations are low and hunter numbers have tanked, but it’s such a fixable problem,” said Rosenberger, now elk project leader with the Virginia Department of Wildlife Resources.

The root of the issue is land management, she said. This means maintaining a balance of opportunities outlined in the Multiple Use-Sustained Yield Act of 1960, which requires that national forests be managed for the use of all the renewable resources they offer, such as timber, habitat, water and recreation. Management decisions are made by the U.S. Forest Service but are then challenged in court by outside groups.

When this happens, plans for timber harvesting or prescribed burns are shelved. This creates a fundamental shift in the forest that affects deer and scores of other species.

“There’s different stages of forest that provide what wildlife, including deer, need at various times throughout the year,” said Rosenberger. In older forests, shade from towering trees provides little opportunity for new growth on the forest floor—the majority of forests across North Georgia. “If you think about this closed-canopy forest, that would be excellent food in the fall or winter because acorns drop. But in the spring and summer, what does that provide?”

Deer tend to be an “edge species,” said Warnell assistant professor Gino D’Angelo, which means they benefit from open meadows as well as areas where the open spaces transition to forest. Plus, small shrubs and trees provide food in the spring and summer as well as cover for fawns.

But with fewer open areas in the forests—areas that could be provided through timber harvests or prescribed burns—there are fewer places for deer to safely live. UGA researchers also have data pointing to lower fawn survival rates in these forests, which ties in to habitat quality.

“We have a real problem with fawn survival in the Chattahoochee National Forest. Black bears and coyotes, which are omnivores, will forage from a blackberry bush just as easily as they might eat a fawn in the spring or summer,” said Rosenberger. “And in theory, if there’s no other food source for black bears, maybe they’re targeting fawns more heavily. Most of the fawns we found were just lying on the ground with nothing growing around them. They’re not able to be as well-hidden as they would be if there was actually some structure on ground level.”

Not only are these forests not conducive to good deer habitat, D’Angelo said, they’re not ideal for a range of other species. Historically, that wasn’t the case.

“These forests are now late-stage; they’re different than what we would have seen pre-settlement. There’s accounts of agriculture by Native Americans, and low-growing vegetation with sparser, larger trees was maintained by fire, which we know happened more frequently because people have studied that through tree rings,” he said. “But not all is lost. Especially with deer. If we had habitat and regulated things properly, they’d bounce right back. Active management has some positives, and we’ve got an engaged public in the form of hunters at least, but probably a lot of other members of the public that want to be engaged in management in the mountains.”

Solutions are multifaceted, they said. First comes education, as many hunters believe certain parts of the Chattahoochee National Forest that have been parceled into smaller wildlife management areas are under control of the Georgia Department of Natural Resources. But Georgia DNR only controls hunting permits, not management decisions.

Education could also inform hunters and residents of pending decisions that require public hearings, where they could advocate for better management. By checking the Chattahoochee National Forest’s webpage, as well as accounts on Facebook (Chattahoochee-Oconee National Forests) and Twitter (@ChattOconeeNF), members of the public can stay aware of upcoming management actions.

Increasing activities such as timber harvesting and prescribed burns could not only improve the habitat for deer and other species, added D’Angelo, but it would better align the national forest with the full range of opportunities it could offer.

“There’s a missed opportunity there, because if we had a variety of habitats, we could enjoy a greater variety of songbirds to see, or we’d see different habitats to hike through,” he said.

Rosenberger emphasized that the root of the issue isn’t about the failings of a particular agency, but rather a larger process that has made it difficult for the U.S. Forest Service to manage the land as it was historically maintained.

“It’s such a fixable problem,” she said. “Hopefully, our research can provide some scientific evidence that the U.S. Forest Service can use in defending some projects and reversing some of the trends.”