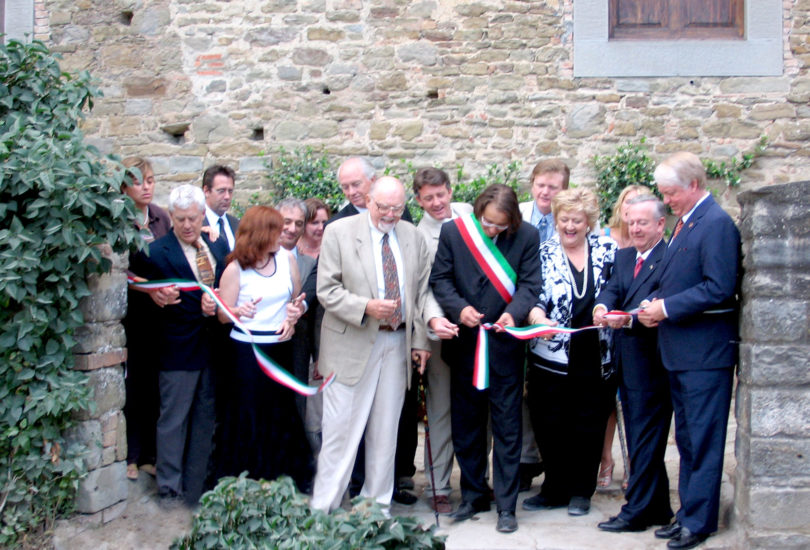 Well-wishers watch Cortona Mayor Andrea Vignini (with sash) and John Kehoe (to Vignini's right) cut the ribbon to officially mark the renaming of UGA's new facility in Cortona in Kehoe's honor. A UGA faculty member for more than 30 years

UGA facility in Cortona named for its founder

During the summer of 1970, John D. Kehoe, a sculptor and UGA art professor, took a small group of students to Cortona, Italy, for art classes. Thirty-five years and nearly 5,000 students later, a new facility in Cortona was named in honor of Kehoe during a ceremony on July 9.

The naming of the John D. Kehoe Cortona Center honors Kehoe’s many contributions to UGA and its Lamar Dodd School of Art, where he served for more than 30 years as a faculty member and 20 years as director of the Cortona study-abroad program. In addition, Kehoe and his wife, Marilyn, have established endowments and scholarships to support the program. They are contributors to the John D. Kehoe Cortona Scholarship, the Friends of Cortona Discretionary Fund and the Cortona Fund for Facilities. Kehoe also serves as a member of the art school’s board of visitors.

“Jack Kehoe is that rare commodity: an extraordinarily talented artist, whose sculpture has been seen and acclaimed worldwide, and an accomplished administrator who served as director of the Cortona program from its beginning in 1970 until 1990,” said President Michael F. Adams during the dedication ceremony. “We would not have this outstanding program were it not for him.”

As a sculptor, Kehoe is known for his work in stone and marble, with an extensive exhibition and public commission record. He has been recognized in many ways for his contributions to the Italian community.

He has received a membership in the Etruscan Academy of Cortona and was granted honorary citizenship by the Commune of Cortona in 1979. He also received the “Ordine Cavallerasco,” the highest non-military order of knighthood authorized by the Italian republic.

The Kehoe Center building was originally constructed in 1270 and is adjacent to the Severini School, where UGA has been conducting the Cortona program. The new center will be used for both academic and residential purposes and has been renovated to include an 80-bed residential facility, a large lecture hall, several common spaces, a dining hall, a laundry and a kitchen, as well as additional studio space for drawing and painting. Support from alumni and friends of the art school enabled the purchase of the facility along with support from the UGA Real Estate Foundation and the UGA Foundation.

The dedication was attended by John and Marilyn Kehoe and their children; Andrea Vignini, the mayor of Cortona; Adams; Pat Pittard, a UGA alumnus and vice chair of the board of regents; Arnett C. Mace Jr., provost; Carmon Colangelo, director of the art school; and R.G. Brown, current director of the Cortona program.

Kehoe originally chose Cortona not only for its history and spectacular scenery but also because of its attributes for art education. Located in Tuscany, the birthplace of the Italian Renaissance, it offers Etruscan, Roman, medieval and Renaissance art and architecture and is within day-trip distance of Florence, Bologna and Siena, home of works by Michelangelo, Raphael, Leonardo and other masters.

Since that first summer, the program has evolved to a full ­curriculum of art courses and electives in the fall, spring and summer semesters. Today, more than 200 students go to Cortona each year to study art, landscape architecture, Italian culture and language, as well as a variety of courses in the humanities.