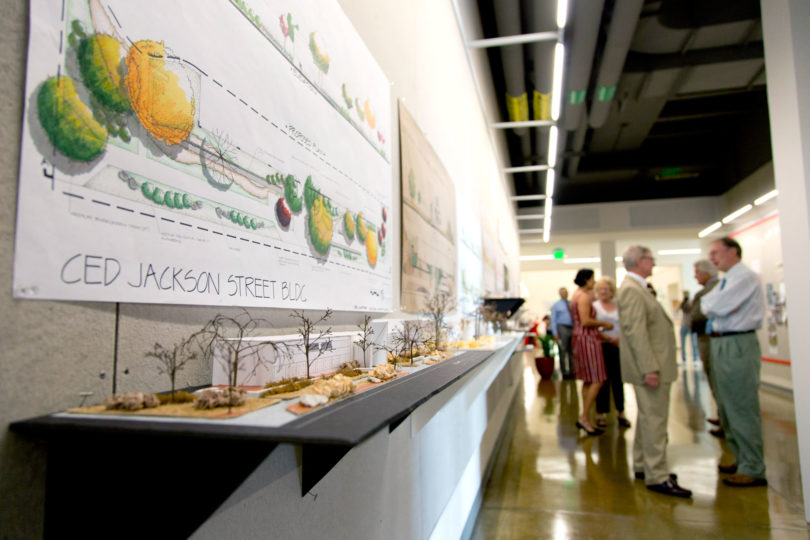 Some are calling it a perfect match.

With the College of Environment and Design moving into the Jackson Street Building (formerly the visual arts building), the CED gets a home where the design and environment is well-suited for its mission. The historic building, on the other hand, is getting a breath of new life.

UGA celebrated the new pairing at a dedication ceremony Sept. 21—50 years to the day after the Jackson Street Building was first dedicated.

Originally designed by noted Atlanta architect Joseph Amisano, the building underwent a year-long renovation for the CED, complete  with some retrofitted environmentally sustainable features, such a solar panels and a water recapture system.

The unique, mid–century building used to house the Lamar Dodd School of Art until it moved to East Campus four years ago.

Daniel Nadenicek, dean of CED, called the Jackson Street Building the new “epicenter of the college.”

While other buildings around campus still host portions of the college, the new headquarters now house the landscape architecture program, the CED’s library, a gallery and administration offices.

“The building is perfect for the College of Environment and Design,” he said during the dedication ceremony.

Nadenicek told the audience that Amisano’s original concept for the building was to provide a space for making and displaying art—a goal that’s in a similar vein to those of CED students. Wide-open studio space and ample natural light from a plethora of windows provide an environment for working and exhibition.

Although the building’s original concepts were tweaked over the years, Nadenicek said the recent renovation restored Amisano’s ideas.

Though it’s a welcome home for CED, the Jackson Street Building always has not been so beloved. With its distinctly modern look in the midst of the Greek Revival-dominated North Campus, the Jackson Street Building received its share of criticism from the community when it first opened in 1962. Some of the nicknames the building received for its perceived strangeness included the “ice plant,” “monstrosity on Jackson Street” and “Dodd’s Folly,” because of Lamar Dodd’s support for the building.

Funding for the renovation came from state dollars and private donations. Several CED alumni donors were on hand at the dedication to mark the occasion.

“What has happened here over the last year, what the University of Georgia has done is, in my opinion, one of the best examples of rehabilitation that I’ve ever seen personally,” Nadenicek said. “Members of the university community, alumni, friends and guests, it is my pleasure to announce to you that Joe Amisano’s building is alive again today.”

Sydney Thompson, a fifth-year bachelor of landscape architecture student, joked that there are certainly some practical advantages to moving into the Jackson Street Building from the previous home, Caldwell Hall.

“It means we no longer have to wait on the obnoxiously slow elevators at Caldwell Hall, and we don’t have to go up and down floors to use the restrooms,” she said.

On a more serious note, she said the vast amount of window space, offering natural light, will help students get through long hours of work. Thompson said the Jackson Street Building, with its superior design and layout, feels more like a home for students focused on environment and design.

At the ceremony, UGA President -Michael F. Adams noted the renovation was proof that UGA is dedicated to historic preservation.

“I can almost hear the building squeaking about how happy it is to be returned to its original glory in so many ways,” Adams said.

“This is another example of the continued effort that many of us have been involved in for a long time. . . to improve, protect and maintain many of the historic properties on this great campus,” he added.