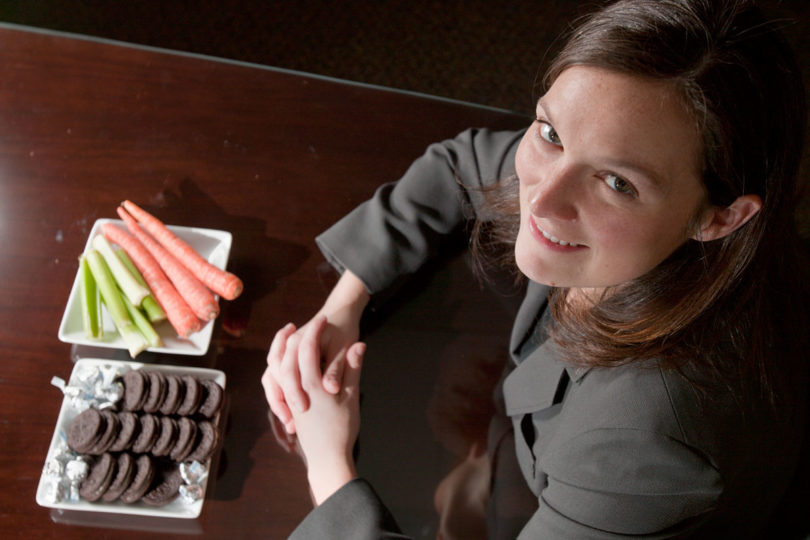 Though eating in moderation might be considered practical advice for healthy nutrition, a new UGA study suggests the term’s range of interpretations may make it an ineffective guide for losing or maintaining weight.

The more people like a food, the more forgiving their definitions of moderation are, said the study’s lead author, Michelle vanDellen, an assistant professor in the Franklin College of Arts and Sciences psychology ­department.

“Moderation is a relative term,” she said. “When people talk about eating in moderation, it doesn’t allow them a clear, concrete way to guide their behavior.”

Viewing moderation through their own objective lens, people—both thin and overweight—tend to err on a looser definition of moderation, according to the research, published in the journal Appetite. The findings are based on the results of different studies the team conducted in the lab and online.

“People do think of moderation as less than overeating, so it does suggest less consumption,” vanDellen said. “But they do think of it as more than what they should eat. So moderation is more forgiving of their current desires.”

In other words, vanDellen said, “The more you like a food, the more of it you think you can eat in moderation.”

The study adds to the growing body of literature that suggests people are poor judges of the amounts of food they’re eating. And in terms of the rising rates of obesity, vanDellen notes a general backlash against dieting.

“People are now saying, ‘Diets don’t work; you shouldn’t go on a diet. You should just live by the rule of moderation,’ ” she said. “This is an increasingly popular belief. There are entire healthy eating movements oriented toward this idea of moderation.”

She cites the many stigmatizing features associated with judging people for being overweight as one possible source of this reaction. These movements are very sensitive to the negative effects of those stigmas.

“But those movements assume people can actually be good judges of what they’re eating and what constitutes an appropriate amount,” vanDellen said. “The fact that those movements are gaining in popularity at the same time we are learning people are not good at estimating things like moderation suggests there’s a lot of room to be concerned about growing rates of obesity.”