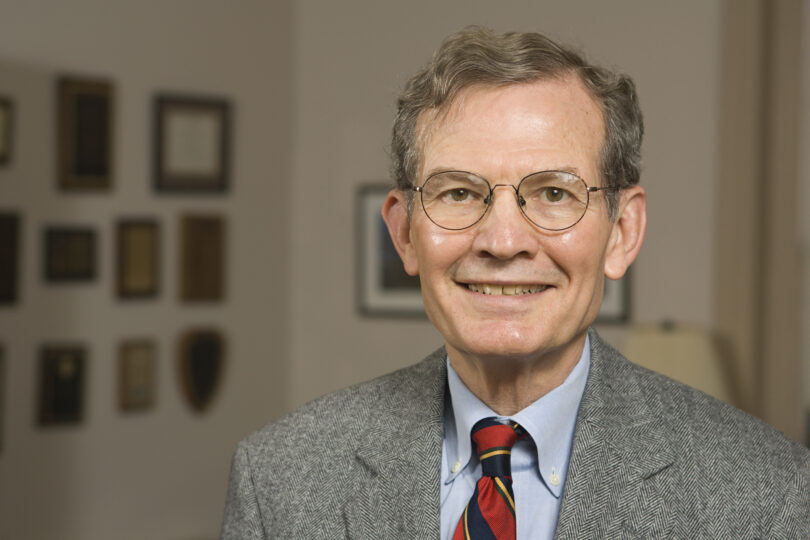 Delmer Dunn served in a number of leadership roles during his nearly 40-year career at the University of Georgia. (Photo by Peter Frey/UGA)

Delmer Dunn, a distinguished professor and administrator whose career at the University of Georgia spanned nearly 40 years, died Monday at the age of 79.

Dunn, a professor emeritus in the department of public administration and policy in the School of Public and International affairs, most recently served as the university’s vice president for instruction before his retirement in 2006. During his time at UGA, he also served as director of the Institute of Higher Education, associate vice president for academic affairs, acting head of the political science department and director of the Institute of Government.

“The University of Georgia mourns the loss of Dr. Del Dunn,” said President Jere W. Morehead. “As a faculty member and administrator, he was an exemplary leader who made a lasting impact on the educational environment of this institution. Our sincere condolences go out to his wife, Ann, and their children.”

Dunn’s research focused on such areas as public administration, government and mass media, American elections and academic administration. He wrote three books as well as dozens of book chapters and journal articles. In 1982, he was awarded the title of Regents’ Professor for the quality and impact of his scholarship.

A member of the UGA Teaching Academy, the Honors Program faculty and a Senior Teaching Fellow, Dunn taught at all levels, from introductory to advanced graduate courses. As vice president, Dunn focused on improving learning opportunities for UGA students and challenging them to perform better academically. His office also was instrumental in establishing the Office of Service-Learning. He received the President’s Medal, one of the highest honors at the University of Georgia, in 2018 for his extraordinary contributions.

“Dr. Dunn was a tireless advocate for UGA’s outreach and engagement mission,” said Jennifer Frum, vice president for public service and outreach. “His vision to create an Office of Service-Learning has meant that tens of thousands of UGA students have been able to apply their classroom instruction to real-world challenges all across Georgia. This has had a long-lasting impact on our students and their careers and the communities we serve.”

Dunn served as president of the National Association of Schools of Public Affairs and the Pi Alpha Alpha national honor society for public affairs and administration. He also was founding president of the Southern Consortium of University Public Service Organizations and has been active in the American Society for Public Administration and both the American and Southern Political Science Associations.

“Del Dunn brought to the Institute of Higher Education his superb ability to work across disciplines and fields,” said Libby V. Morris, the Zell B. Miller distinguished professor of higher education and director of the Institute of Higher Education. “His curiosity about multidisciplinary problems, his respect for faculty and his commitment to students informed his leadership roles. He was not only the Institute’s director, he was also a university citizen. We were all made better by knowing him.”

Dunn received his doctorate in political science from the University of Wisconsin and joined the UGA faculty as an assistant professor in 1967. Except for a two-year leave, he never worked elsewhere.

“Del Dunn modeled impactful public service for our students, staff and faculty,” said Matthew R. Auer, dean of the School of Public and International Affairs. “His life’s work was making UGA accessible to students and ensuring that students are successful upon reaching Athens.

“Del felt that the Pell Grant was particularly important in this regard. He studied the origins of Pell and as a scholar, teacher and administrator, he helped realize the promise of Pell right here at UGA. He inspired multiple generations of future public administrators, researchers and teachers who earned their degrees at UGA.”