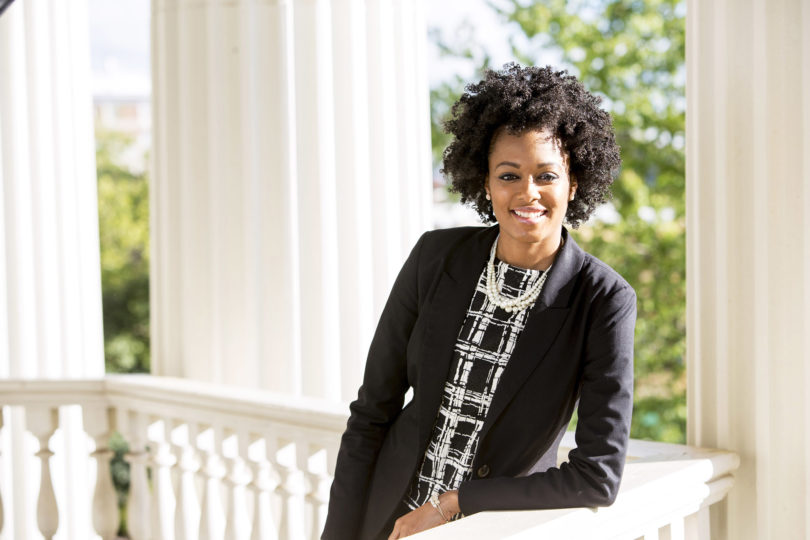 “No matter who you are, where you come from or what your background is, I know you have a story,” she said. “I want to know your story, because I think it will enrich me. We’re the sum of all of our experiences, and I feel that every life I touch and that touches mine changes us and enriches us.”

Matthews’ own story began by being raised by her Jamaican mother, and that culture still has a strong presence in her life. In fact, every year, she and her husband, Cliff, cook a traditional Thanksgiving feast but celebrate Christmas with Jamaican food. Throughout her life, she’s balanced the two.

“First-generation Americans often find that they’re on the cusp of two different cultures,” she said.

Matthews also has an interest in Spanish culture, earning her bachelor’s degree in the language, which she taught at a high school in Charlotte. From there, her passion extended to higher education, and she earned a master’s degree in higher education administration. She was the first person in her family to earn a college degree and plans to finish the program for her doctorate in education in May 2018.

Currently, Matthews is the coordinator of faculty and staff development for the Office of Institutional Diversity. It wasn’t an area in which she originally envisioned herself, but when she saw the needs of the racially and ethnically diverse high school students she was teaching, she began to wonder where the diversity was in the curriculum.

“When you see a school of diverse students,” she wondered, ” ‘Why don’t any of the examples look like my students?’ “

As she worked on her master’s degree, she continued to research the issue to find answers she could apply in her classroom. Eventually, she looked to bring those same principles to higher education.

“I like the interdisciplinary work of diversity,” she said. “Every day is a different day.”

Matthews said what the Office of Institutional Diversity does is “professionalize the work of diversity and inclusion,” taking those ideas and connecting them to the university’s mission. Her hope is that by interacting with models of diversity at UGA, faculty, staff and students then incorporate those principles into the rest of their daily lives.

“I don’t want to always position diversity as something that just makes us feel good,” she said. “It is a necessity. It is a reality of life.”

She works most closely on the certificate for diversity and inclusion program. In her time at UGA, she’s made efforts to help the program run more efficiently and expand class offerings. In addition, she also meets with individual colleges, schools and units about their diversity plans.

“We want diversity to be connected to everything we do here at the university,” she said. “Understanding that diversity is part of life—I think that’s what our diversity work is. It moves that into a more broad conversation.”

Her life outside of work is just as diverse. Cooking, cleaning and organizing are her “getaways” and preferred methods to unwind. Matthews and her husband enjoy traveling and try to take a trip out of the country once each year. They also binge watch shows on Netflix, which they call “movies” since they’re watching several episodes in succession.