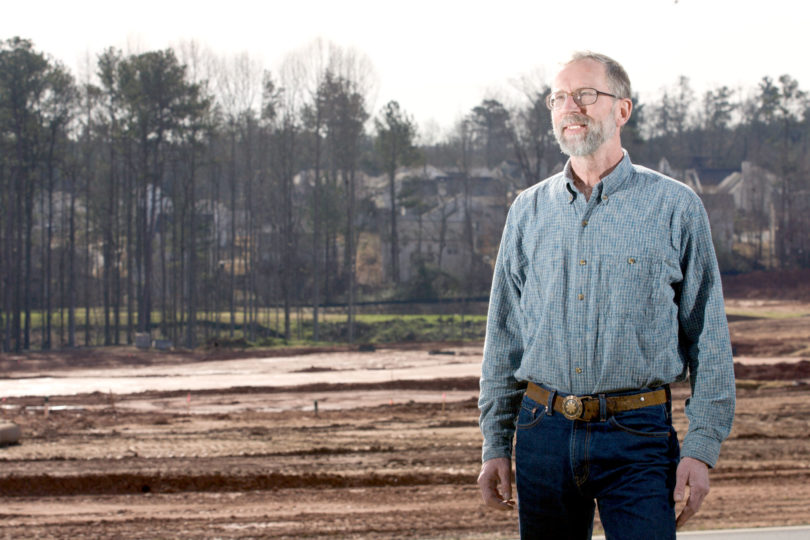 Stephen Kowalewski stands at a construction site in the Athens area. The site

For generations, schoolteachers taught Georgia children that the state’s history began with the arrival of James Edward Oglethorpe near what is now Savannah in 1733. That information was off the mark-by thousands of years. In fact, the land we now call Georgia was the home of great chiefdoms and civilizations that left their stories in village sites from Rabun Gap to Tybee Light.

Thousands of those sites have been identified in the past half-century, but urbanization is rapidly increasing the destruction of the state’s prehistory, and soon bulldozers may erase crucial clues to understanding the “first Georgians.”

That’s the message in a special issue of the journal Early Georgia published in 2005 and led off by UGA archaeologist Stephen Kowalewski in an article entitled, “When the Past is Destroyed: Loss of Archaeological Sites Due to Urbanization.”

Examples of recently destroyed sites are all too common. A site found by an amateur collector not far off Interstate 20 in Greene County was bulldozed for condominiums. Another site near Athens suffered the same fate recently.

Kowalewski makes clear in his paper that much of the destruction is inadvertent and simply a consequence of normal growth in urban and suburban areas. Deliberate destruction of sites is, in fact, relatively rare, though mounds all over Georgia have been damaged by so-called pothunters for more than a century. (Looting is a crime that can result in fines and jail time.)

“What we want to stress is that these sites have an information legacy,” says Kowalewski, “which consists of all the context and relationships between the artifacts and their surroundings.”

The amount learned in the past 30 years about Georgia’s early history is staggering. For example, Kowalewski points out that in 1980 “no historian or archaeologist knew that there had been a whole Native American chiefdom, a province of several tens of thousands of people, in Piedmont, between Milledgeville and Athens.”

But now, it has been discovered and documented.

Much of the knowledge comes from responsible amateur collectors, who pick up potsherds and projectile points from sites, map the locations and share the information with state archaeologists.

Still, there are about 40,000 known sites in the state and only around 50 professional archaeologists.

Using data from an earlier study, Kowalewski estimates Georgia might have had 900,000 archaeological sites, of which at least 5 percent are irrevocably destroyed and another 50 percent deteriorating. While those figures are alarming and Kowalewski admits “there is little standing in the way of further destruction of the past,” but there is some hope.

He says a few steps in the right direction for saving Georgia’s archaeological heritage could include:

Kowalewski points out that “it is not our purpose to . . . decry or complain about urban growth or the carrying out of normal economic activities.”

Indeed, most Georgians remain almost completely ignorant of the scope of the civilizations that once stretched all over the state.

“Our message is positive,” Kowalewski says. “Archaeological sites are worth standing up for. To destroy knowledge does not become ­humankind.”

The same issue of Early Georgia contained essays on saving Georgia’s archaeological past by Malcolm Jared Wood and Gregory Lucas (“Land-Use Change and Impact on Archaeological Sites in Georgia”) and Terry Jackson and Jack Tyler (“A Strategy for Conservation Archaeology in Georgia”).