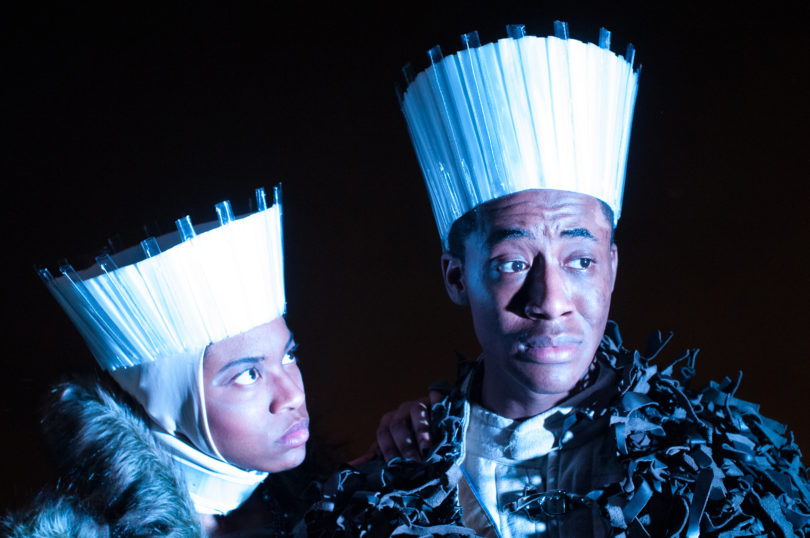 University Theatre will conclude its 2012-2013 season with a media-rich production of Shakespeare’s Macbeth, directed by David Saltz, head of the theatre and film studies department. The play will be performed in the Fine Arts Theatre April 11-12 and 17-20 at 8 p.m. as well as April 14 and April 21 at 2:30 p.m.

Putting a postmodern twist on the Bard’s tale of treason and ambition, University Theatre’s production employs large, translucent, LED curtains that display animation and video flying into various positions over, behind and in front of the actors to achieve Saltz’s vision for freshly staging the play’s more sinister and stunning events. University Theatre has teamed up with UGA alumnus Rick Clark of Entertainment Design Group in Atlanta to furnish the stage with a towering and movable three-piece, multi-level set.

Saltz has crafted a production that imagines the witches both as embodied and as a kind of Internet-age viral infection. The witches move from victim to victim, first striking Macbeth and eventually contaminating Lady Macbeth to fan the flames of Macbeth’s hunger for power. Ivan Ingermann, associate professor of costume design, has embedded programmable LED lighting effects into the costumes for the witches and the characters they infect. Professor Mike Hussey’s multimedia and performance students worked closely with Saltz to design and animate for the show, and art/expanded forms major Chris Howe is assisting with interactive media.

In 1997, Saltz founded the Interactive Performance Laboratory UGA, which has produced a series of productions incorporating digital technology that have received international attention. According to Saltz, this production of Macbeth is the most ambitious of these productions to date. However, he stresses that “while I love experimenting with new and exciting ways to use technology, for me it still ultimately all comes down to the actors. I use technology for one purpose: to enhance the work of the live performers.”

Saltz maintains that “in the best Shakespeare performances, we become completely engrossed in what’s happening on stage and we forget that we’re watching ‘Shakespeare.’ ”

Commonly called the “Scottish play” by actors and theater folk-especially when in a theater-Macbeth has spawned legendary superstition and fear among actors and spectators alike in its more than 400 years of performance. For the superstitious, the play’s ill-luck comes from the belief that Shakespeare used actual witches’ spells in his dialogue for the three weird sisters who predict Macbeth’s rise as Scotland’s king.