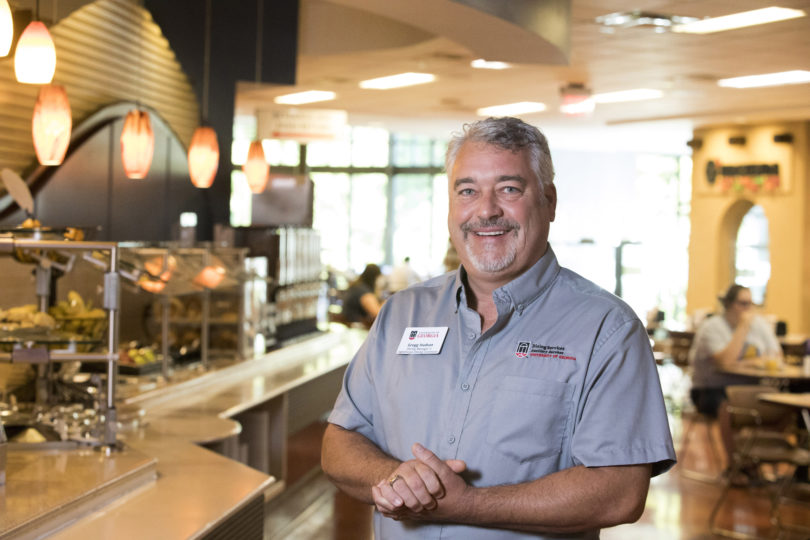 Gregg Hudson can tell a lot from a simple slice of cheese pizza. 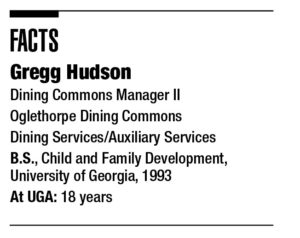 “The whole goal is to find a way to better serve the students and this community,” he said.

“These dining halls have become a social center,” he said. “Students aren’t just eating here. This becomes part of their lives.”

Every day is a little bit different, and Hudson said managers wear many hats, from doing inventory and bookkeeping to ordering food and putting it away to training new employees.

“The managers have to get in and work right alongside everybody else,” he said. “I have 35 years in food service, so naturally, I’ve become a great line cook.”

For the past six summers, Hudson has hired and trained a team to work with Auxiliary Services to sell meal plans during orientation sessions, carefully explaining how they save time and money, going over the details of all the options and answering questions.

The project that has meant the most to him was starting The Niche. Hudson and Christopher Fagan, a member of Dining Services’ retail dining team, developed the concept from scratch. It became so successful—the pizza, in particular—that they created The Niche Pizza Co. in the Tate Student Center.

Hudson’s career in the food industry started when he was 16. He grew up as an only child on a cattle ranch in Oglethorpe County and had chores to do before school. The day he got his driver’s license, he drove down the road, stopping at every business to inquire about job openings so that he could work somewhere other than on his family’s ranch. Arby’s took a chance on him, and it shaped his future.

For Hudson, it’s the people that matter.

“Serving the students and this community is what I enjoy,” he said. “I enjoy coming to work every day because I know I have a chance to have an impact on people, no matter who they are.”

He wants to give back to students like himself and joined the new UGA Mentor Program, which pairs alumni with students. He sees himself as more than just a manager to the students working for him and works to adapt to their changing needs.

“I thrive off of other people. I’m very excited about the opportunity to have an impact on students, one-on-one,” he said. “I’m here to serve people. That’s my No. 1 goal.”

Outside of UGA, Hudson is a bit of a Renaissance man. Not only does he cook for his family and for his church, but he also grows his own produce in his garden, orchard and vineyard. In addition, he’s building his own house. He’s raised bees and can do carpentry, welding and other metalwork.