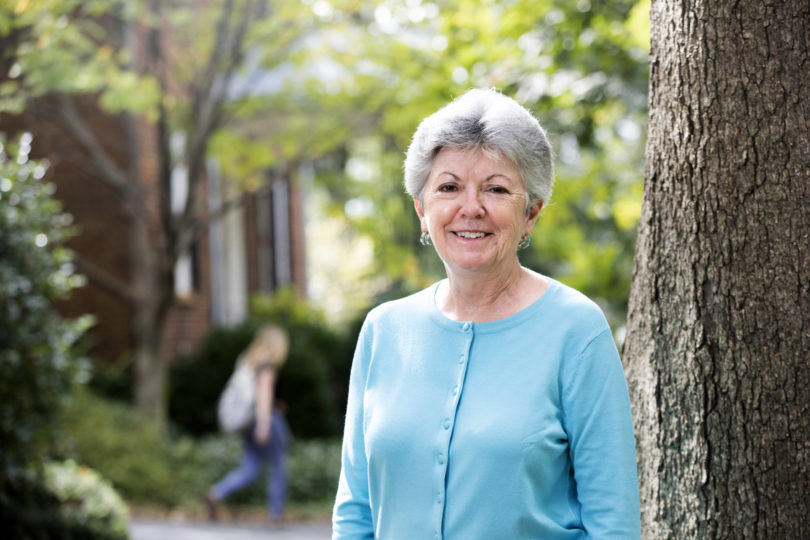 During Dorinda Dallmeyer’s 12 years as EECP director, she has taught thousands of students and led hundreds of seminars. (Photo credit: Dorothy Kozlowski)

Dorinda Dallmeyer’s professional life has numerous threads of interests that weave a rich fabric. She is a writer, a teacher, a geologist and naturalist, a lover of art and cultures and a legal scholar, among other things.

When she is not exploring the far reaches of the planet from Alaska to Antarctica, she can be found in her kayak on one of Georgia’s many rivers. Her diversity of interests is undergirded with a profound sense of ethics that shapes all of her endeavors, the main focus of which is the natural environment.

Dallmeyer, who has directed the Environmental Ethics Certificate Program at UGA’s College of Environment and Design, will retire on Dec. 31. For the past 12 years, she has taught thousands of students from disciplines all over campus and led hundreds of seminars.

“The founding principle of the Environmental Ethics Certificate Program was to encourage faculty and students to talk across disciplines at UGA,” Dallmeyer said. “We established a path that would give students a good understanding of ecological science and environmental philosophy, at the same time allowing them to tailor their electives to their own interests.”

Among the founding members of the EECP 35 years ago were CED’s Darrel Morrison, Allen Stovall and Bruce Ferguson. Jack Crowley, former dean of what was then the College of Environmental Design, was instrumental in hiring Dallmeyer as director of the program in 2006.

This job came after a 21-year career at the Rusk Center from 1984 to 2005, where she had worked with Dean Rusk, Thomas Schoenbaum, Louis Sohn and Milner Ball, among others, in the fields of international law and environmental policy. Her primary research areas crossed a spectrum of international law, with a particular emphasis on the role of negotiation and dispute resolution.

Given her lifelong love of Southern landscapes, Dallmeyer served as editor of the anthology Bartram’s Living Legacy: Travels and the Nature of the South; essayist in Philip Juras’ exhibition catalog, The Southern Frontier: Landscapes Inspired by Bartram’s Travels; co-editor with James R. Holland and Janisse Ray of the book Altamaha: A River and Its Keeper and essayist in Philip Juras’ exhibition catalog The Wild Treasury of Nature: A Portrait of Little St. Simons Island. Her current project is serving as executive producer and screenwriter for the documentary film Cultivating the Wild: William Bartram’s Travels.

Before Dallmeyer’s career in law, the focus of her collegiate studies was geology.

In 1977, she received a master’s degree in geology for her research on the effects of climate change on deep-sea benthic organisms.  She then worked with UGA professor James W. Porter for more than three years, conducting research in tropical marine biology and ecology in Jamaica and off the Georgia coast.

“My love and deep appreciation of the natural world came from my childhood in Macon, where I grew up in a four-generation household at the edge of the fall line, across the road from an amazing park built in the 1930s,” Dallmeyer said. “The park had a spring-fed lake and boardwalk, along with all the things that would excite a small child, like a miniature train and a skating rink.

“We fished in that lake fall, winter and spring,” she added. “I spent hours searching for rocks and discovering fossils, which became a life-long obsession.”