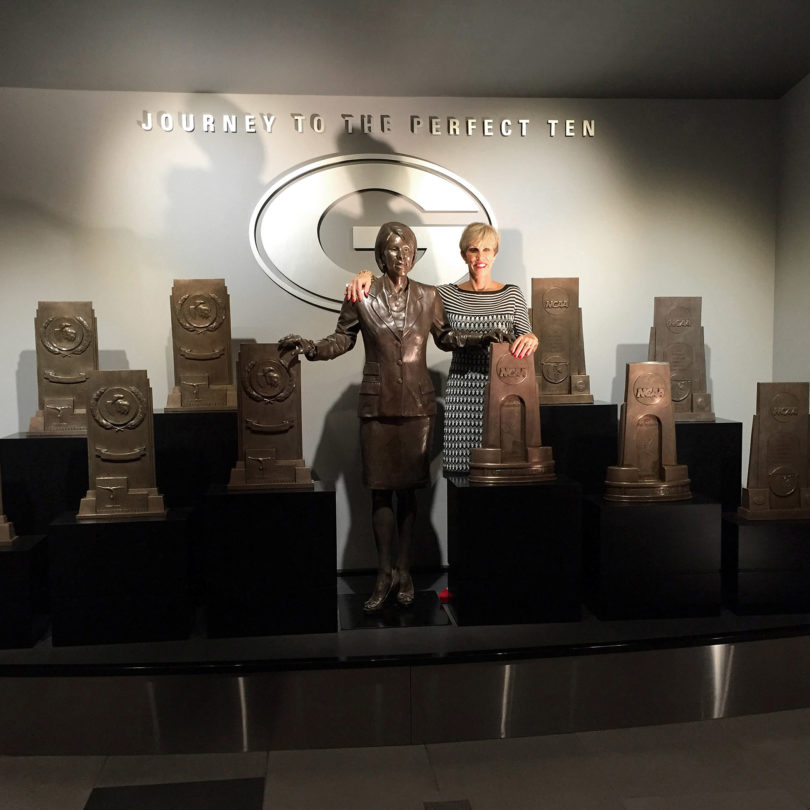 Former head coach Suzanne Yoculan poses with a championship display that honors her and the UGA gymnastics program.

The display, which is located on the Carlton Street side of the coliseum concourse, also celebrates the accomplishments of the student-athletes and contributions of the UGA staff during Yoculan’s 26 years at the helm of the gymnastics team.

“In the history of Georgia athletics, Suzanne will be remembered as the best of the best,” said UGA President Jere W. Morehead. “This display is a well-deserved tribute to the talent and dedication of Suzanne, our outstanding student-athletes and the assistant coaches and staff members who supported them.”

Yoculan took over the UGA program prior to the 1984 season and guided the team to 10 NCAA championships, including five in a row from 2005-2009, 16 Southeastern Conference titles and 22 NCAA regional crowns. Yoculan’s teams finished in the nation’s top three in 21 of her last 22 years.

“This symbolizes the building of a program,” Yoculan said. “It was all of us together with one mission. It’s really amazing to walk past this and know what it represents for everyone.”

In 19 of her 26 years as head coach at UGA, Yoculan led her team to either an SEC title, an NCAA title or both. She won a championship in more than 70 percent of her tenure, and she also finished at least third in the conference, the nation or both all 26 years. Under Yoculan’s direction, UGA won
37 NCAA individual championships, and 59 gymnasts earned a total of 308 All-American honors.