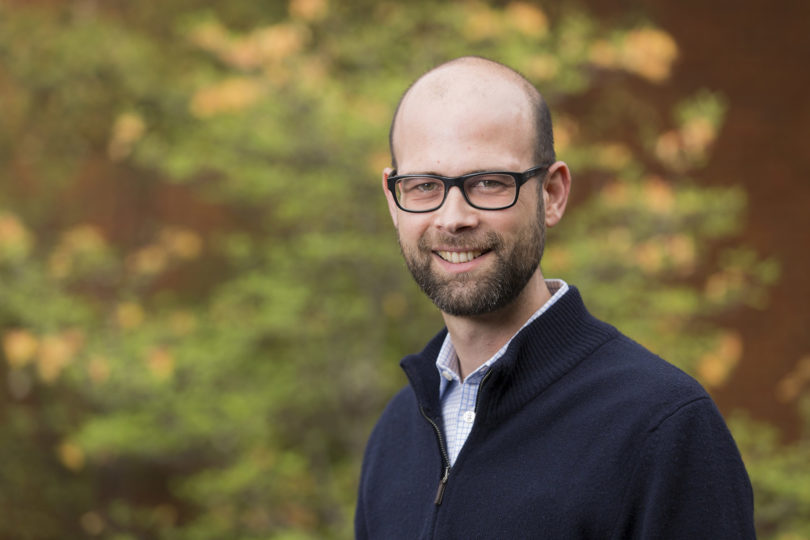 The title of Distinguished Research Professor is awarded to faculty who are internationally recognized for their original contributions to knowledge and whose work promises to foster continued creativity in their discipline.

John Drake, professor in the Odum School of Ecology, is a globally recognized authority on the ecology of infectious diseases. Described by an external evaluator as “possibly the leading ecologist of his generation,” Drake conducts research in the interdisciplinary field of population biology, crossing boundaries between ecology, evolutionary biology and epidemiology. His contributions include new theoretical results, original experiments, and the development of new quantitative methods for reconciling theory and data.

He developed a novel experimental system that showed for the first time that characteristic statistical fluctuations known as “critical slowing down” may be used to devise early warning signals of environmental deterioration. He developed a new approach to model-independent early-warning systems for emerging and re-emerging infectious diseases.

Jessica Kissinger, professor of genetics, is a globally recognized molecular biologist and world expert in bio-computational research whose contributions to the field of eukaryotic pathogen research have helped transform how pathogen research is conducted internationally. An expert on the evolution of parasite genomes, she conducted the first systematic survey of gene transfer in the Apicomplexa, upending prevailing thought. Her subsequent series of papers on the Apicomplexa also opened a new window into genome evolution and the biology of several other important disease-causing organisms.

Her most recognized and sustained contribution to science has been the co-creation, maintenance and enhancement of integrated omics tools to facilitate research on eukaryotic pathogens. The databases and program resources have been designated an NIH Bioinformatics Resource Center.

Tianming Liu, professor of computer science, is an internationally recognized researcher in the field of brain imaging and mapping.

In addition to building a fundamental understanding of the brain, his research has enabled understanding of the relationship between brain anatomy and function, with applications to medical and surgical interventions, and the treatment of psychological and psychiatric disorders.

Highlights of Liu’s distinguished record include the discovery of a novel mechanism of cerebral cortex folding, which offers a general framework for describing and modeling the anatomical connectional and functional architectures of the brain. His research group developed a map of the human brain named DICCCOL, which shows great promise as a new guide to the inner workings of the body’s most complex and critical organ.

Peggy Ozias-Akins, professor of horticulture, is widely recognized as a world expert on apomixis, the asexual production of seeds in plants. Although the phenomenon was intensely studied for decades, there was little to show for these efforts. Ozias-Akins took a pioneering approach and applied a combination of forward genetics, genetic engineering and genomics to the problem. She was among the first to ever localize apomixis to a chromosomal region, and later she found the first plant gene associated with apomixis. Her work lays the foundation to begin research into systematic application of apomixis in plant breeding, which could have enormous impact on agriculture in both advanced and developing nations.

Ozias-Akins has been equally successful in applying the biotechnological and molecular biology tools that she has developed to specific cases of crop improvement, most notably the peanut.

Claudio Saunt, Richard B. Russell Professor in American History, has made tremendous contributions to the fields of early America, Native American and digital history, and to understanding the complexities of our world.

He is among an elite cohort of historians who have gained scholarly and public attention for their inclusive, continental approaches to American history, and his perspectives permeate virtually all new historical scholarship.

Saunt has published three award-winning books, but his belief that history is not merely for academicians also has guided his expansion into the digital world, including creating an online presence for American history.

One of the first scholars to recognize the value and possibilities of digital technology, he has used mega-data to do highly demonstrative digital mapping and interactive projects that reconstruct changing American population dynamics, land cessions, disease and Native demography.

His forthcoming book, Aboriginia: Mass Deportation and the Road to Indian Territory, is anticipated to become the leading history of Indian removal.