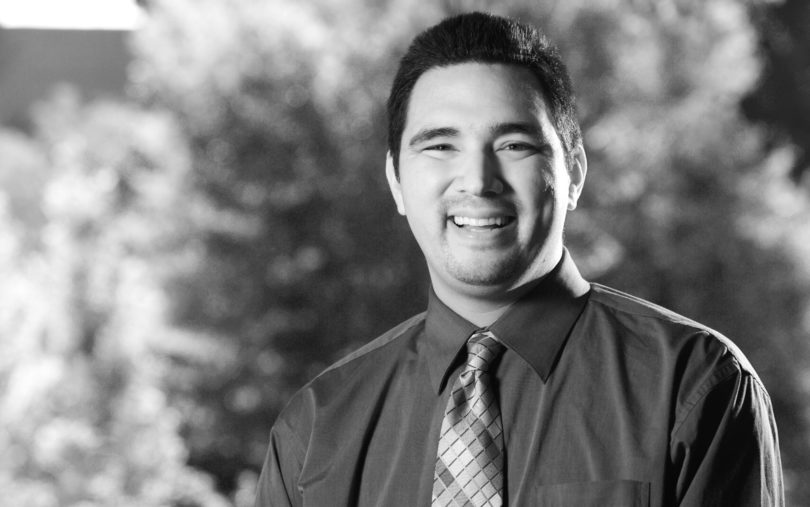 Listeners of WPUP-FM, “Bulldog 103.7,” already know him as weeknight radio host Just Joe, but they may not know that the man behind the microphone is Joe Dennis, the new director of diversity and high school outreach for the Grady College of Journalism and Mass Communication. For the past three years Dennis has worked as Grady College’s Georgia Scholastic Press Association director while getting his master’s degree in mass communication and working part time for the “world-class” rock radio station.

“Radio was my major and is still a passion of mine,” he said.

Delivering a mix of tunes ranging from Snow Patrol to Poison between 7 p.m. and midnight, Dennis’ favorite show is his own creation, “The Big Rock Show,” which airs live on Fridays. For five hours, Dennis takes listeners back to the 1980s, playing requests for rock music also known as “hair metal.”

“Music is a very powerful element for many people, myself included,” Dennis said. “There are certain songs I identify with a specific moment of my life, and when I hear that song it takes me back.”

Besides music, diversity issues greatly interest Dennis. Growing up on the south side of Chicago, Dennis lived and attended school in a diverse area. However, when he came to Grady, he experienced a slight culture shock.

“Coming into Georgia and working at Grady, what I saw was a lack of diversity,” he said.

A former newspaper news editor, Dennis planned on returning to newspapers after earning his degree, but when Grady’s Dean Culpepper Clark offered him the school’s first diversity position earlier this year, he immediately accepted.

“The diversity aspect of the job really fascinates me because there’s really no blueprint for it at Grady,” Dennis said. “It’s a topic I feel passionate about, and it’s an issue I think is very important.”

The task of attracting more minority students could be a challenge due to the university’s reputation.

“To diversify Grady College, to diversify the university, is a long process,” he said. “There are centuries of history working against us.”

Last year, Dennis visited Redan High School in Stone Mountain to recruit students. At the predominantly African-American school, none of the students he talked with wanted to attend UGA. So, Dennis started working with organizations like the National Association of Black Journalists to recruit more underrepresented students. He also works with the GSPA to hold an annual conference each fall that brings high school students to the university for a weekend of media production training.

During the school year, he is an instructor of journalism, and this semester is teaching lab sessions for the editing and makeup class. In the summer, Dennis runs the college’s Journalism Academy, a weeklong camp where students learn about and produce media, from newspapers to television broadcasts. Ultimately, Dennis wants to help diversify Grady because he believes that exposure to different ethnicities and cultures will not only benefit students in college, but also in the real world.

“It’s unfair to our students of all ethnicities and backgrounds,” he said. “They’re not getting a realistic view of the world. You’re going to deal with people of diverse backgrounds in your life, what better place to learn that than from being in college?”

Dennis says he misses being a reporter, but as the diversity director he now has the ability to expose others to journalism. “I found that I really enjoy working with high school students and sharing the knowledge that I have and passing on journalism down to a new generation,” he said.