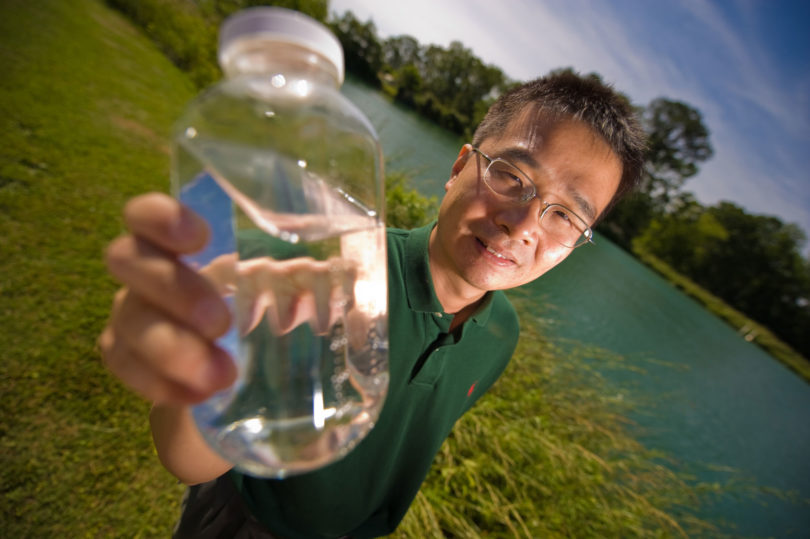 UGA environmental chemist and associate professor Jack Huang holds a jar of water for a research project on the UGA campus in Griffin.

Griffin, Ga. – Perfluorinated chemicals keep eggs from sticking to frying pans, protect furniture from spills and help firefighters fight blazes, but studies now show that some of these chemicals—particularly the ones used to fight fires—are also toxic to laboratory animals in varying amounts.

To help clean up these chemicals, the Department of Defense’s U.S. Air Force Center for Engineering and the Environment awarded University of Georgia associate professor Qingguo “Jack” Huang a $689,431 grant to test the effectiveness of an enzyme-based approach for removing perfluorinated chemicals, commonly known as PFCs, from contaminated soil.

“PFCs are emerging as contaminates, and big users of these chemicals are concerned about cleaning them up,” said Huang, an environmental chemist with the UGA College of Agricultural and Environmental Sciences. “These chemicals are robust and hard to degrade, and none of the current technologies are practical for remediation.”

The U.S. Department of Defense and the U.S. Air Force are searching for a way to remove the chemicals and have recognized that Huang’s work on the UGA campus in Griffin could be the answer.

The U.S. is one among several countries looking for a way to clean up these chemicals “that chemists designed a long time ago,” Huang said. Governments in Australia, Canada and the European Union have placed restrictions on how these chemicals are used. California, Minnesota and New Jersey already have regulations in place, and efforts are being made to clean up areas-mostly firefighting training centers and industrial sites-where the chemicals have soaked into the ground.

“These products are used at military bases, airports and oil-drilling facilities, where fire-fighting practices are routinely performed,” Huang said. “These are big scale uses that release the chemicals into the soil where they go into the ground water.”

Companies are already phasing out the manufacturing of some PFCs, and the U.S. Environmental Protection Agency plans to regulate certain types of PFCs soon, he said. Locations where the PFCs have been regularly released likely will be responsible for removing the chemical’s residues from their land.

Huang has been studying the use of enzymes to degrade these chemicals, and his early findings earned him the Department of Defense grant funds that he will use for the three-year study.

Huang’s goal is to take the concepts he has proven in the laboratory and test them in the field. He will first design and find the optimal formula of the enzyme, and then he will conduct tests at actual cleanup sites. AECOM, the largest engineering consulting company in the world, will serve as a subcontracting partner on the project and will handle the field aspect of the project.

“Basically, our project is a start,” Huang said. “These chemicals have made a significant profit in the past. Now, reports show they are harmful. The DOD is quite serious about this. Once these chemicals are regulated, PFCs will be a big responsibility because the contaminated sites will have to be maintained and cleaned up.”