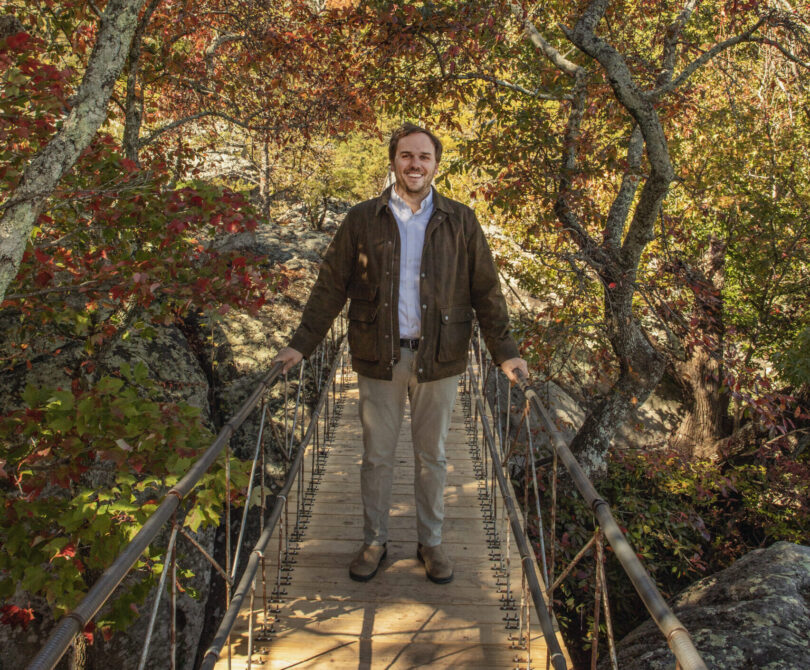 Doug Chapin AB '11, BBA '11 grew up steps from Lover's Leap, one of the most popular lookouts at Rock City, the legendary tourist destination in Chattanooga, Tennessee. Chapin is the fourth generation of his family to lead Rock City Gardens and his innovative ideas are bringing a new energy to the classic venue. (Photo by Chris Collins)

See Rock City through the eyes of its CEO.

That invitation greeted generations of travelers across the Midwest and Southeast, splashed on billboards, and—most memorably—painted on the sides of barns as they headed South to visit family or enjoy a vacation.

With its lush gardens and memorable views, there has always been a lot to see at the popular destination atop Lookout Mountain near Chattanooga, Tennessee.

He grew up in a house just steps away from Lover’s Leap, one of Rock City Gardens’ most stunning overlooks. The property, and the attractions that make up its core, have been in Chapin’s family since before World War II.

While Doug has nothing but positive memories from growing up in the middle of a tourist attraction that draws 500,000 visitors a year, that didn’t mean he necessarily saw himself following in the footsteps of his older family members.

“I have three older sisters,” Chapin says. “My parents made it clear that we didn’t need to feel any pressure to go into the family business. So, we took them at their word.”

You can go to a theme park, and most of those are built on flat pieces of ground, and then everything is created around that. The difference here is that there is only one Fat Man’s Squeeze; there is only one Lover’s Leap. Try as hard as you want, it just can’t be made again. It’s only here.” — Doug Chapin AB ’11, BBA ’11, president and CEO of See Rock City, Inc.

After graduating from high school, Chapin came to the University of Georgia, where he double-majored in economics and international affairs. After earning his degree, he took a sales job, but two years later he felt the pull of the family business.

One of those shops gave Chapin his first taste of working in the family business. He took over Clumpies Ice Cream, a craft dessert maker with a shop in North Chattanooga.

Eventually, Chapin became director of special projects for the company. In 2019, his father was ready to step away, and the family seriously considered selling the gardens. By early 2020, the family had received letters of intent from prospective buyers.

Then the pandemic hit. The attraction shut down. And so did talk of selling.

“We looked at the way we care for people,” Chapin said, referring not just to visitors but also to the company’s 300-plus employees they refer to as “partners.”

“Even if we get to give someone one experience, one memory, that is something that really matters. We are affecting people’s hearts and minds and serving them in ways that are really important, especially when times are so hard.”

When Rock City reopened in May 2020, it did so with several changes. The Rock City team had the footpath through the gardens realigned and introduced timed ticketing to reduce overcrowding.

With the Gardens’ 90th anniversary this year, there is a lot more to come.

“You can go to a theme park, and most of those are built on flat pieces of ground, and then everything is created around that,” Chapin says. “The difference here is that there is only one Fat Man’s Squeeze; there is only one Lover’s Leap. Try as hard as you want, it just can’t be made again. It’s only here.

“We want to lean into those defining things. People come, and they are not on their phones. People are fully engaged with this place. We don’t want to lose it.”

This story will appear in the Winter 2022 issue of Georgia Magazine.