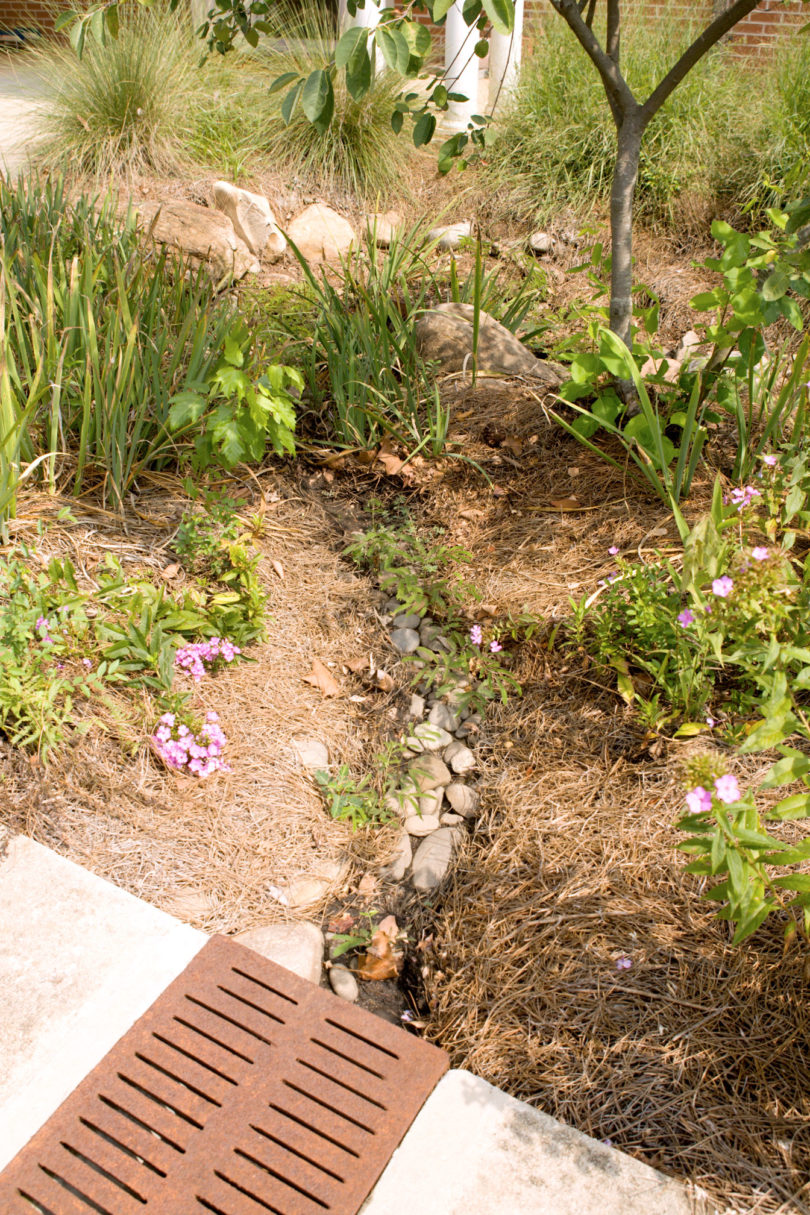 The raingarden outside the Grounds Department building.

The casual observer would never guess what was really happening in the garden outside of the physical plant’s grounds department.

A narrow trail of smooth stones winds its way through the lush plot of native plants. There’s a small clue-a modest pipe that juts about a foot above ground-but it’s overshadowed by all of the switch grass, iris, service berry trees, phlox, upland sea oats, black-eyed Susans and ferns.

Turns out that charming stone path channels polluted water drainage from the roof and parking lot, and that stout pipe prevents the garden from flooding surroundings in heavy rains. Beneath the landscaping are two reservoir levels that filter the water, encouraging a chemical and a biological process that ensures water is cleansed as it returns to either the subsoil or a storm system.

The parking lot used to drain directly into nearby Trail Creek, but this garden-formally known as a bioretention cell, casually called a rain garden or raingarden-is one of many on campus that works to improve water quality.

“The ultimate goal is healthy creeks and rivers,” said Kevin Kirsche, assistant director of planning. “All of these raingardens play their own small part.”

A raingarden starts with a shallow basin, usually six to eight inches deep, that contains an overflow device-such as a stand pipe-to prevent flooding. The water collects and filters through two layers beneath the surface. The first layer is an equal mix of organic material, sand and loam; the second is made of stone upon stone, leaving empty spaces through which the water passes.

As the water filters through the subsurface layers, the microorganisms contained in the mix of compost, sand and soil begin to digest that material, thus “treating” it, said Dexter Adams, director of the grounds department. The water then goes into a conventional storm system through a pipe, or back into the subsoil.

On campus, the raingardens are generally situated next to parking lots, often buffered by small areas of grass. Take a second look at the landscaping, and you’ll find raingardens not only at the grounds department, but also at the College of Pharmacy building, the Carlton Street parking lot near the McPhaul Child and Family Development Center, the Memorial Garden at the Student Learning Center, the intramural fields near the tennis courts and the ecology building.

However, when construction is done on Lumpkin Street, there will be more raingardens along that corridor than all other UGA locations combined.

Spurred by Lumpkin Street’s history of flooding and draining to the already degraded Tanyard Creek, UGA officials “urged the city to include water quality measures in the storm water design” that Athens-Clarke County is implementing through extensive construction, Adams said.