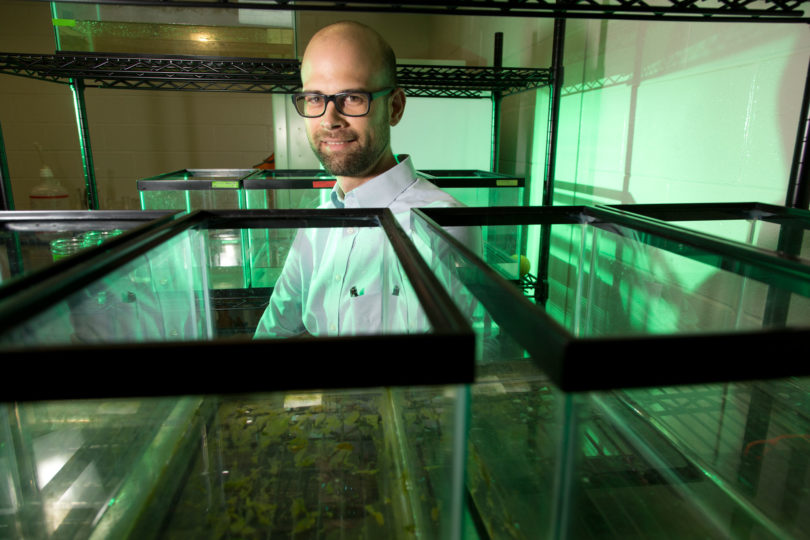 Athens, Ga. – John Drake, an associate professor in the University of Georgia Odum School of Ecology, will use a five-year, $3.18 million grant to develop an early warning system that could help public health officials prepare for—and possibly prevent—infectious disease outbreaks.

Funded by the National Institute of General Medical Sciences, part of the National Institutes of Health, the research is part of the Models of Infectious Disease Agent Study, a coordinated network of scientists who use computer models to study infectious disease dynamics. While each scientist leads an individual project, they work together toward the overall goal of helping the public health community prepare for and respond to infectious disease outbreaks.

Drake and his colleagues—Andrew Park of the Odum School and College of Veterinary Medicine, Pejman Rohani and Bogdan Epureanu from the University of Michigan and Matthew Ferrari of Pennsylvania State University—will develop mathematical models to forecast when a disease system is approaching a “tipping point,” a threshold at which conditions become favorable for an outbreak to occur.

Drake explained that tipping points occur in all kinds of complex systems—everything from financial markets to Earth’s climate system. Once a tipping point has been passed, the system is vulnerable to collapse. But before that happens, there are signals that can alert observers a tipping point is imminent.

“John Drake and his team have previously identified patterns in data as biological systems approach a tipping point,” said Irene Eckstrand, National Institute of General Medical Sciences scientific officer for the MIDAS program. “With their new grant, they will use their expertise to search for these patterns in outbreak data, potentially providing new forecasting tools.”

In 2010, Drake became the first scientist to demonstrate that tipping points could be used to predict extinction in biological systems.

Working with experimental colonies of water fleas, he found that as a population neared a tipping point—in this case, when its food supply declined below a particular size-certain patterns in data signaled the tipping point’s approach. Once that threshold was crossed, the colony inevitably became extinct. Drake theorized that the data patterns characteristic of nearness to a tipping point could form the basis of an early warning system for extinction.

“Shortly after that, it occurred to me that there’s a deep similarity between those tipping points and the ones we see in emerging infectious diseases,” he said, an idea that led to his proposal to the NIH to develop an early warning system for disease outbreaks.

Such a system would use data reported to public health agencies to detect the approach of a tipping point. A typical scenario might start with a pathogen that infects animals but not people, or one that infects people but isn’t easily transmitted. Then something changes. Perhaps the pathogen mutates so that it can jump across species, perhaps vaccination levels drop or perhaps potential disease hosts start to congregate in one place in large numbers. When conditions become more favorable for the disease than not, the tipping point has been reached. After that, the introduction of an infectious individual to the system can set off an outbreak.

Conversely, this approach could also be used to predict the imminent eradication of infectious diseases with continued control efforts, such as routine immunization.

Preliminary research by Drake and his colleagues suggested that patterns characteristic of an approaching tipping point could be detected in public health reports based on fluctuations in the number of cases of the disease being monitored. If public health officials were able to spot such a pattern as it happens, they might have time to prepare for an outbreak—or possibly even intervene and reverse the changes pushing the system toward one.

Obstacles exist. The capacity for public health surveillance varies from country to country. Timely reporting is not always possible, and the likelihood of inconsistent reporting or under-reporting is particularly high in some areas.

Drake said the research will provide information that public health officials could use to design more effective monitoring programs. For instance, reporting may need to happen on a different schedule, depending on the pathogen.

“Take an emerging influenza-like illness, an acute infection that moves fast and is highly transmissible,” he said. “If you’re moving toward a tipping point, how frequently do you have to report? If it’s moving too fast, it’s going to go through that transition before you’ve even seen it. You might need to increase reporting from once every two weeks to every week or three days for the information to be useful.”

The team from the University of Michigan will be focusing on pertussis—or whooping cough—in the U.S. “Pertussis could present an interesting test-bed for these ideas because increased vaccine coverage led to the near elimination of the bacterium in the U.S. in the 1970s,” Rohani said. Since then, however, pertussis has re-emerged, with incidence hitting levels that had not been witnessed for 60 years.

“Grant support for this work could not be more timely,” said John Gittleman, dean of the Odum School. “The world is scared about disease outbreaks, sometimes for legitimate reasons, sometimes not. The new research by John Drake and colleagues will help us understand the conditions under which diseases are likely to emerge and spread. UGA is on the front lines for this area of research, and we’re grateful that the NIH is recognizing such excellence.”

The researchers ultimately aim to produce open source computer software that will allow anyone to analyze and interpret disease surveillance data to forecast tipping points and provide the earliest possible warning of disease outbreaks.

“We’ve got a promising idea, now we want to stress test that idea. Let’s see how far we can push it before we break it,” Drake said.

The research will be funded through a grant from the National Institutes of Health under award number U01GM110744.