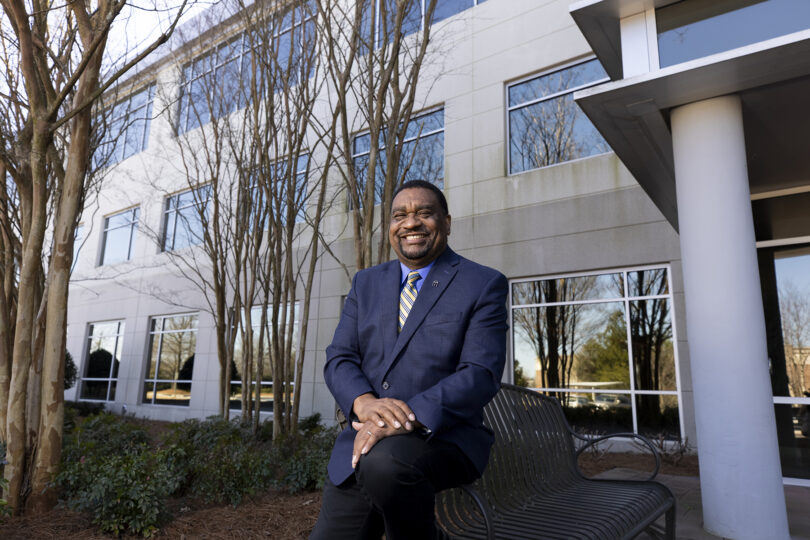 Tony Lowe is an associate professor and researcher in the School of Social Work. (Photo by Andrew Davis Tucker/UGA)

Isaiah Lofton was appointed by President William McKinley as postmaster of Hogansville, Georgia, in 1897.

Lofton, a black teacher active in the Republican party, wasn’t welcomed into his position. Instead, many white people in Hogansville who were infuriated at the appointment prompted years of hardship and violence toward Lofton, including a boycott of his postal services.

In September 1897, Lofton was shot in an attempted assassination but survived. Today, Lofton is honored with a Georgia Civil Rights Trail historical marker, and the city plans to hire contractor Falcon Design to establish an Isaiah Lofton Memorial Park. That’s all thanks to the dedicated research of Tony Lowe.

Lowe, an associate professor and researcher in the School of Social Work, was one of five recipients of the 2021 President’s Fulfilling the Dream Award, which acknowledges students, faculty, staff and Athens community members who honor the legacy of Martin Luther King Jr.

“Aspirational values, embedded in one of our nation’s most scared documents, helped give rise to Dr. King’s dream that challenges us all to live up to the principles of racial equality, human rights and social justice. But to do this, we must first come to grips with our difficult past,” he said during the virtual 18th annual Martin Luther King, Jr. Freedom Breakfast, held Jan. 15.

His work outside and within the city of Hogansville does exactly that.

For Lowe, the award is a symbol of recognition he’s honored to have.

Lowe’s work focuses on the history of a West Georgia community. The shooting of Lofton in 1897 and the murder of Postmaster Frazier Baker in South Carolina in 1898 were featured in an 1898 New York Times article that called for a civic protection organization to support African Americans.

Civil rights leader Bishop Alexander Walter of the African Methodist Episcopal Zion Church led these efforts. Eventually, he convened Black leaders from across the U.S. in 1898. This organization would become known as the National Afro American Council—the predecessor of the NAACP, the nation’s oldest civil rights organization.

Lowe’s research emerged out of Lofton’s story—a story he had heard of and later verified. He began an intense research process, visiting state and regional libraries, national archives and other archival research through the University of Georgia’s database.

A native of Hogansville himself, Lowe went directly to the community and began asking questions. He eventually connected with a peer from high school and discovered her mother was related to Lofton. Although her mother had died recently, Lowe was introduced to another relative.

“She connected me with an older aunt who was born in 1930 and had knowledge about the story itself. She not only had knowledge about it, but she also basically had the only surviving photo that I was able to find of Postmaster Isaiah Lofton,” he said.

Again, Lowe turned to the community and organized a community forum, including a lecture about his work. Soon after, he was invited to present his findings to the Hogansville City Council and the Hogansville Historical Society.

With the help of the city council and the historical society, they were able to cement the marker to honor Lofton.

“It was about tying in economic development, tourism and history, so it helped anchor the idea,” he said. “The Troup County Chamber of Commerce also wanted to support it and signed on as a co-sponsor to support the project.”

Lowe was also invited to present to the Troup County Racial Trust Initiative, a county-wide, multiracial group of civic leaders representing government, education, law enforcement, religious and civic organizations that seek to build bridges of understanding in the community.

The collaboration between Lowe and the city of Hogansville led to the city receiving the Georgia Trend Magazine and the Georgia Municipal Association’s inaugural Visional Leadership Award during the 2020 annual conference in Atlanta. Hogansville was one of nine cities in Georgia to receive the award. Lowe jointly accepted the award with city officials during the conference.

The award spotlighted cities that “have exhibited success in planning and forward-thinking in the areas of civic engagement and collaboration,” according to Georgia Trend.

At the end of the day, Lowe said his work was born out of the community. He used university access to develop the story and then gave back to the community with his findings.

Although revisiting moments and history can be difficult and even painful, Lowe said he has no problem “wading into those waters” and said the best way to face painful history is to face it directly, the way King did.

“One thing about history is you can run toward it and make it your own. The idea is, how do we own this, but also in turn embrace it? Just embrace that it happened and don’t try to deny it. Acknowledge it and that acknowledgement becomes an important piece of healing,” Lowe said.

The Georgia Civil Rights Trail historical marker honoring the legacy of Lofton was erected and dedicated on Sept. 14, 2019. The marker reads:

“On September 15, 1897, Isaiah H. Lofton, Hogansville’s black postmaster, was the victim of an attempted assassination after leaving the city’s post office located here in the black business district, locally known as “Cross Town.” The appointment of African Americans to local positions by Republicans in the U.S. government exacerbated political animosity between the federal government and the post-Reconstruction white South. To resist the appointment of Lofton, white citizens of Hogansville boycotted the post office, and tensions eventually led to his attempted assassination. Acts of violence against federally appointed African American officials, such as this attempt and the murder of South Carolina postmaster Frazier Baker and his family, may have contributed to the creation of the National Afro-American Council in 1898, a precursor to the National Association for the Advancement of Colored People.”