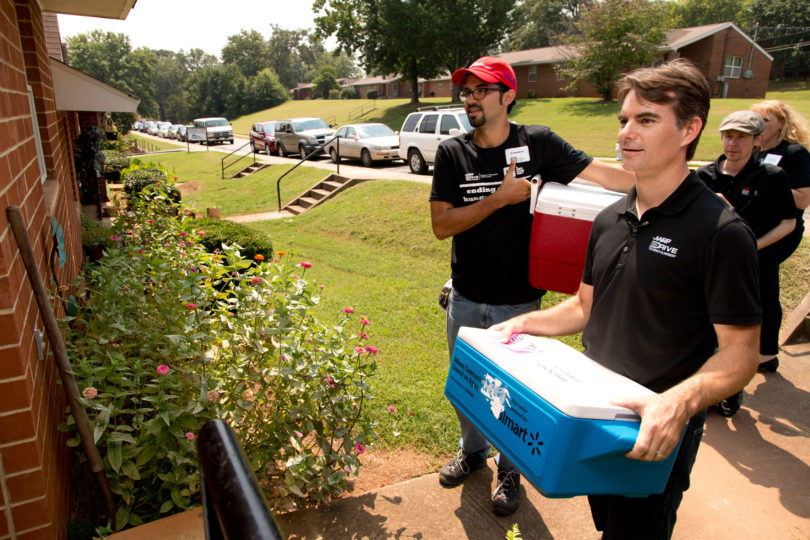 NASCAR driver Jeff Gordon may be known for driving at speeds just shy of 200 mph on the track, but when he came to visit Campus Kitchen at UGA and the Athens Community Council on Aging Aug. 29, he knew to slow things down in the kitchen.

“Some things you don’t want to go too fast with,” he said jokingly as he chopped strawberries during the meal preparation. “I need my fingers.”

Prior to helping out in the kitchen, Gordon took a tour of the ACCA building at 135 Hoyt St. His visit was part of AARP’s and AARP Foundation’s Drive to End Hunger. Created in 2010 to raise awareness about older adult hunger, the program aims to develop long-term, sustainable solutions to the problem. In 2011, AARP became NASCAR’s first cause-based primary sponsor with Drive to End Hunger featured on the No. 24 Chevrolet driven by Gordon.

“These last three years have opened my eyes to the scope and impact of older adult hunger,” Gordon told an audience at ACCA. “We’re talking about people who in many cases did all the things they were supposed to do in life, but still wound up struggling to put food on the table, whether because of a serious illness, an economic setback or family issue. These are people who often prefer to help family members and put their loved ones first rather than ask for
help themselves.”

Together with local partners, including the ACCA and the Talmage Terrace Senior Living Community, Campus Kitchen at UGA provides healthy meals to Athenians using fresh produce and collected excess food that would otherwise be wasted.

“In the United States-and I’ll put this in a term that all these Athenians will understand-we produce enough food waste to fill up Sanford Stadium every day,” said Sarah Jackson, outreach coordinator for Campus Kitchen at UGA. “At the same time, more than 9 million adults are at risk for hunger. Luckily, here at Georgia and across the nation, there are students who are here to do something about it.”

More than 200 students volunteer with Campus Kitchen at UGA and perform tasks from meal preparation to waking up Sunday mornings to collect and sort more than 1,000 pounds of food that local grocery stores would otherwise throw away.

“I love what the Campus Kitchen at UGA is all about and what they’re doing here,” Gordon said. “These are future leaders in our communities and nation who have taken the time to do this.

After talking with the audience at ACCA, Gordon and student-volunteers Camden Lowrance and Amber Flanigan delivered meals to two families. The recipients of a special delivery by the four-time NASCAR champion were Deanna Schmidt and Gail Brooks, participants of ACCA’s Grandparents Raising Grandchildren program.

In the house with Schmidt and Brooks were: Madeleine Schmidt, 18, Emma Brooks, 82, Brianna Gee, 8, and Brayden Gee, 5. Madeleine Schmidt said the children kept poking their heads up to look out the window, wondering why there were cameras following the people coming with their meals.

“It was interesting,” Madeleine Schmidt said. “The kids were so shocked to see Jeff Gordon.”

As he carried in a cooler containing their meals Gordon told the excited family, “I’m not Jeff Gordon today, I’m just here delivering this on behalf of Campus Kitchen.”