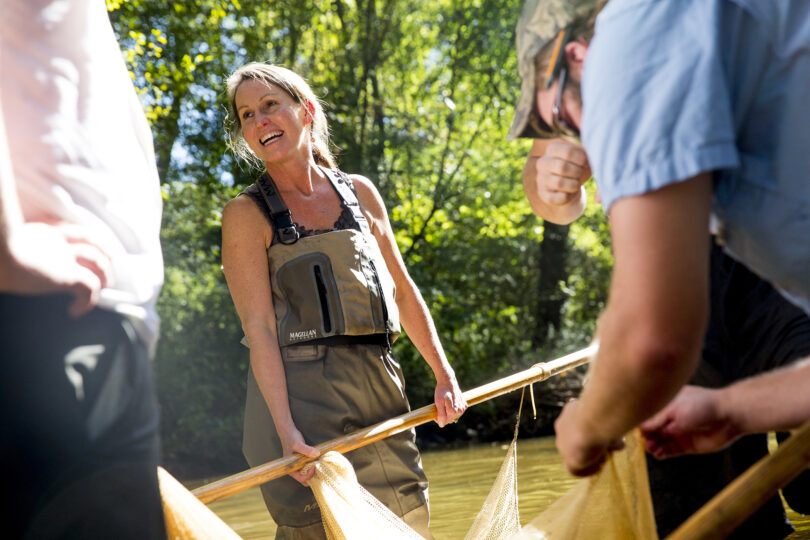 A University of Georgia professor’s dogged research into a mysterious eagle-killing disease has now received an international award.

The American Association for the Advancement of Science, the world’s largest general scientific society and publisher of the Science family of journals, has announced the 2022 winners of the AAAS/Subaru SB&F Prize for Excellence in Science Books. The eight awards honor scientists, engineers, authors, journalists and other public servants for their contributions to our understanding of science and come with cash prizes of $5,000 to $25,000 each.

The Newcomb Cleveland Prize honors the work of Susan Wilde, an associate professor of aquatic science at the UGA Warnell School of Forestry and Natural Resources, and Timo Niedermeyer, professor of pharmacognosy at Martin Luther University Halle-Wittenberg in Germany. Published in March 2021, their research highlights the emerging issues posed by toxic cyanobacteria in habitats beyond lakes and reservoirs, such as the deadly effects it has on bald eagles and other southeastern waterfowl.

The Newcomb Cleveland Prize is the organization’s oldest award, dating to 1923, and is presented to the authors of the best research article or report published in Science each year. AAAS recognized the winners during the organization’s annual meeting on Feb. 17.

“Bald eagles are top predators in our aquatic environments, and so are we,” said Wilde. “When eagles are dying, we have concerns for the health of the entire ecosystem.”

Wilde and others began studying the issue in 2001 when bald eagles began dying in Georgia, South Carolina and North Carolina. Once they understood what was causing the erratic movements and, eventually, death in eagles and other wildlife around man-made reservoirs, their focus turned to its cause. In the years since, the team discovered the cyanobacteria that caused brain lesions, Aetokthonos hydrillicola, Latin for “eagle killer that grows on Hydrilla,” the invasive aquatic plant that grows in these reservoirs.

But the scientists still couldn’t connect the bacteria to the brain lesions that were killing wildlife. Niedermeyer, who has worked with cyanobacteria for years, wanted to help put the pieces together. Using new imaging technology, his lab was able to identify a new molecule formed when bromide is present in the water—a chemical found in lakes associated with power generation.

After another decade of testing and collaborating between labs in Germany and Georgia, the team determined that this molecule triggers vacuolar myelinopathy, the disease killing eagles across the Southeast.

Today, the team continues to work on the project, identifying other plants that may be serving as hosts to the deadly bacteria. They also work to inform the public about the risks of eating fish from lakes where the disease has been identified. For a map of affected watersheds, visit the Warnell website.

After pursuing the mystery for decades, said Wilde, receiving the Newcomb Cleveland Prize reinforces the value of scientific collaborations. Winning research is selected based on its quality, the likelihood of influencing its field and its wider significance.

“These awards and prizes represent some of our most valued principles here at AAAS,” said Sudip S. Parikh, AAAS chief executive officer and executive publisher of the Science family of journals. “These outstanding individuals have dedicated their careers and livelihoods to improving the world with science, and we’re proud to see them receive this recognition.”