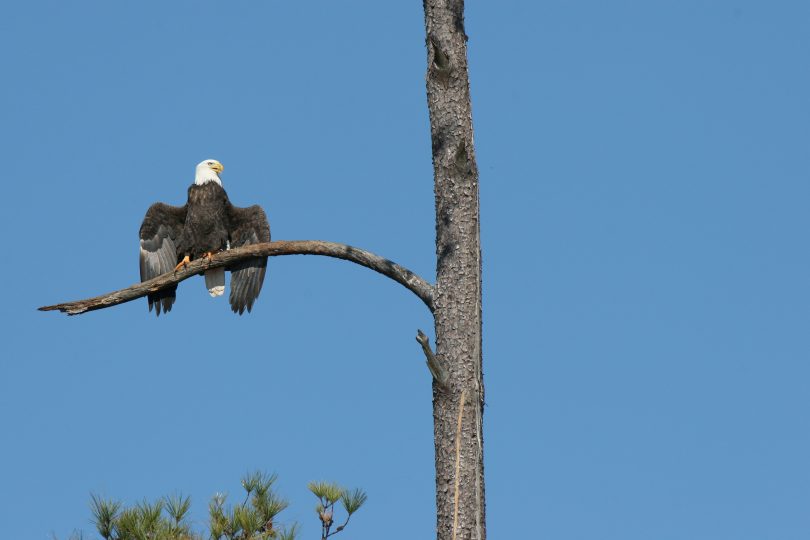 A bald eagle’s drooped wings show signs of brain infection caused by the bacteria Aetokthonos hydrillicola, which grows on the leaves of the invasive hydrilla plant in human-made lakes. (Submitted photo)

The alarm bells began ringing when dozens of eagles were found dead near an Arkansas lake.

Their deaths—and, later, the deaths of other waterfowl, amphibians and fish—were the result of a neurological disease that caused holes to form in the white matter of their brains. Field and laboratory research over nearly three decades has established the primary clues needed to solve this wildlife mystery: Eagle and waterfowl deaths occur in late fall and winter within reservoirs with excess invasive aquatic weeds, and birds can die within five days after arrival.

But until recently, the toxin that caused the disease, vacuolar myelinopathy, was unknown.

Now, after years spent identifying a new toxic blue-green algal (cyanobacteria) species and isolating the toxic compound, an interdisciplinary research group from the University of Georgia and international collaborators have confirmed the structure of this toxin. The results were recently published in the journal Science. 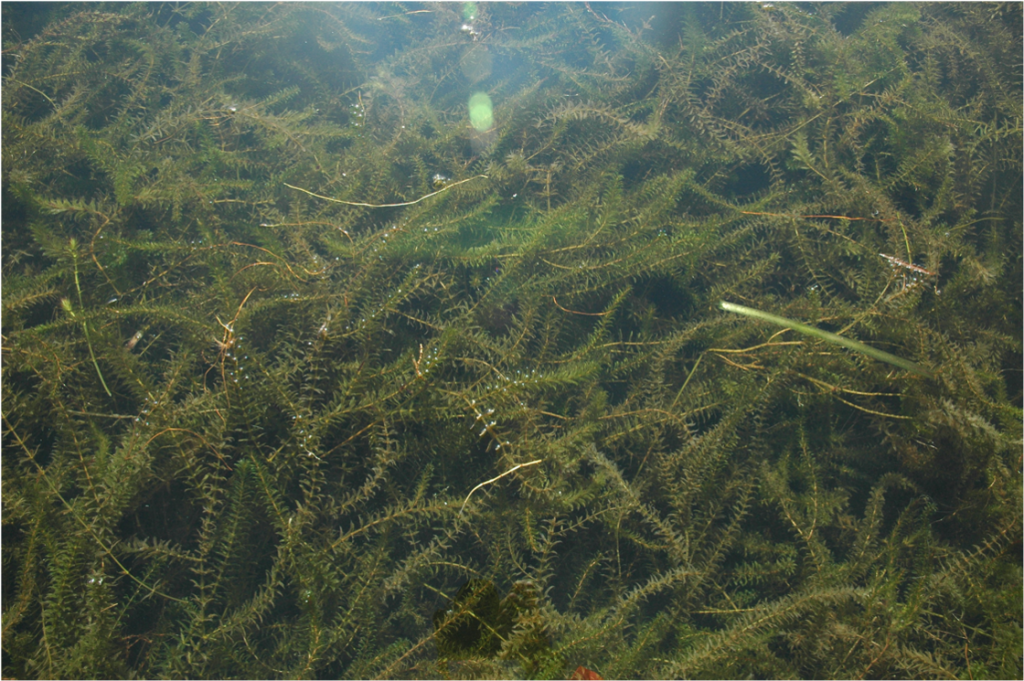 The invasive water plant Hydrilla verticillata can be found in many human-made lakes across the Southeast. (Submitted photo)

The cyanobacteria grows on the leaves of an invasive water plant, Hydrilla verticillata, under specific conditions: in manmade lakes when bromide is present. The bacteria—and animal deaths from the disease it causes—has been documented in watersheds across the southeastern United States. This is why it’s important for anyone in the outdoors—anglers, hunters, birdwatchers and more—to be aware of the signs of this neurological infection and avoid consuming infected animals.

“We want people to recognize it before taking birds or fish from these lakes,” said Susan Wilde, an associate professor of aquatic science at the Warnell School of Forestry and Natural Resources who first discovered the cyanobacteria. In some animals, such as birds, turtles, salamanders and even a beaver, the disease manifests as erratic movements or convulsions. Anglers must be even more cautious, though, as it’s impossible to detect toxin in fish without obvious symptoms.

“For fish, it’s tough. I would avoid eating fish with lesions or some sort of deformities; we do see affected fish with slow swimming speeds, but anglers won’t be able to see that,” added Wilde. “We want people to know the lakes where this disease has been documented and to use caution in consuming birds and fish from these lakes.”

Wilde and Warnell graduate students studying the cyanobacteria have compiled maps and a list of affected watersheds.

The most recent study details new mapping of the bacteria’s genome, a final piece in the puzzle to understand how it develops and survives. Wilde and others have been studying the cyanobacteria since 2001, when bald eagles began dying in Georgia, South Carolina and North Carolina. The following decades saw the discovery of the cyanobacteria itself, Aetokthonos hydrillicola (Latin for “eagle killer that grows on Hydrilla”), and connections made between the invasive aquatic plant and the animals that eat it. 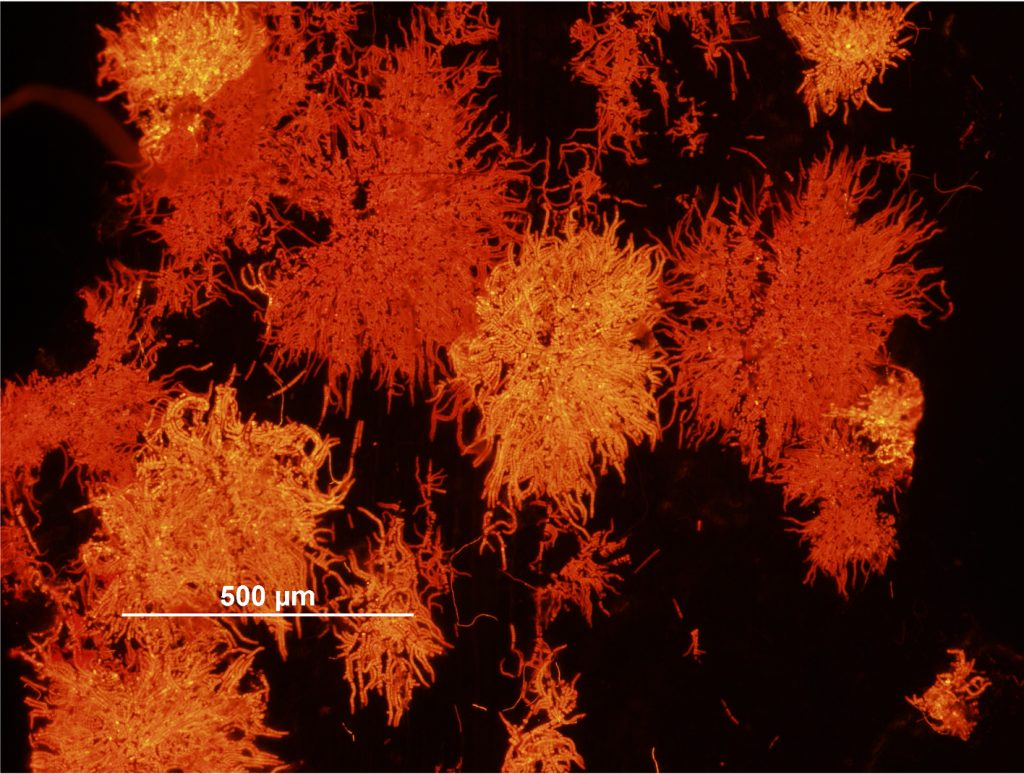 An image of Aetokthonos hydrillicola as seen through epi-fluorescence microscopy. While the cyanobacteria is virtually undetectable under a traditional microscope, the illuminated fluorescent light makes the cyanobacterial pigments glow and reveals its unique feathery shape. (Submitted photo)

But until recently, said professor Timo Niedermeyer of the Institute of Pharmacy at Martin Luther University Halle-Wittenberg in Germany, the origin of the brain-decimating disease was a mystery.

Niedermeyer, who has worked with cyanobacteria natural products for years, wanted to help put the pieces together. He contacted Wilde and offered to collaborate. Samples of Hydrilla collected in the field were sent to him, and his lab cultivated the cyanobacteria in the laboratory and sent them back to UGA for further testing. But the tests came back negative: The cyanobacteria from the lab did not induce the disease.

“It’s not just the birds that were going crazy, we were too. We wanted to figure this out,” said Niedermeyer. Once again, he had colonized leaves sent to him from UGA.

Steffen Breinlinger, a doctoral student in his research group, then used a new imaging mass spectrometer to investigate the composition on the surface of the plant’s leaf, molecule by molecule. He discovered a new substance that only occurs on the leaves where the cyanobacteria grows but is not produced in the cyanobacteria cultures. His investigations into the chemical structure of the isolated molecule revealed five bromine atoms.

“The structure is really spectacular,” said Breinlinger. The properties are unusual for a molecule formed by cyanobacteria, and they provide an explanation for why the toxin did not form under laboratory conditions, where bromide isn’t present. “We then added bromide to our lab cultures, and the cyanobacteria started producing the toxin.”

After almost a decade of testing the isolated molecule and collaboration between the labs in Germany and Georgia, they had their proof: the molecule does trigger vacuolar myelinopathy.  The researchers call their discovery aetokthonotoxin, “poison that kills the eagle.”

“Finally, we did not only catch the murderer, but we also identified the weapon the cyanobacteria used to kill those eagles,” said Wilde.

The neurological disease has not yet occurred in Europe, and no instance of the toxin-forming cyanobacterium has been reported. Humans are not yet known to be affected by vacuolar myelinopathy, although the study did successfully affect chickens with the toxin, and Wilde continues to test fish and waterfowl such as ducks and coots for the disease.

To read the study, visit Science.