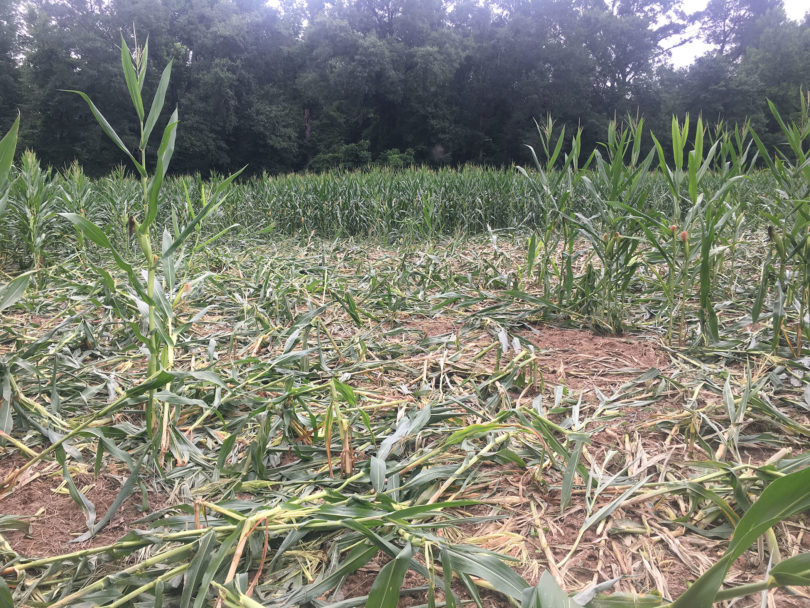 Landowners found 21 pigs in the woods next to this damaged field in Jackson, South Carolina. (Photo by Chris Boyce)

Wild pigs cause millions of dollars of damage to agriculture industry

Invasive wild pigs take a big bite out of farmers’ wallets, causing about $40 million in damages to peanut crops and $61 million to corn crops in 11 states annually. A recent study by University of Georgia researchers reports that the optimum time to prevent potential damage and economic loss from wild pigs is just prior to planting.

Lead author Chris Boyce and a team of scientists surveyed damage in 3,000 acres of corn and peanut fields in five counties in central South Carolina. They began ground surveys 10 to 12 days after crops were planted, walking the land and recording the damage they observed. The team repeated the process monthly over the course of two growing seasons, allowing them to identify when and where the damage occurred. Remote cameras capturing the presence and numbers of wild pigs provided supplemental data.

The first surveys recorded the most wild pig damage, according to Boyce, an alumnus of the Savannah River Ecology Laboratory and the Warnell School of Forestry and Natural Resources.

The study results indicate that agricultural fields located near forest and wetlands—areas considered prime pig real estate, or habitat—are more likely to incur damage. Combining this data with use of trail cameras to elucidate the number of wild pigs in these areas can help farmers and land managers prioritize locations for control efforts.

The damage wild pigs cause in the U.S. is indicative of a larger problem, according to James Beasley, who advised Boyce on the study.

“Wildlife damage to agriculture is one of the most common sources of human-wildlife conflicts throughout the world. In particular, wild pigs are major culprits because they have been introduced across the globe and now occur on every continent except Antarctica,” said Beasley, associate professor at SREL and Warnell. “Yet there are few studies that have investigated when and where wild pig damage to crops tends to occur. This study is a start to providing land managers, including farmers, with the data they need to reduce the financial loss caused by the species.”

The study, “Timing and extent of crop damage by wild pigs to corn and peanut fields,” was published in the journal Crop Protection.

K.C. VerCauteren of the USDA Wildlife Services was a co-author on this study.