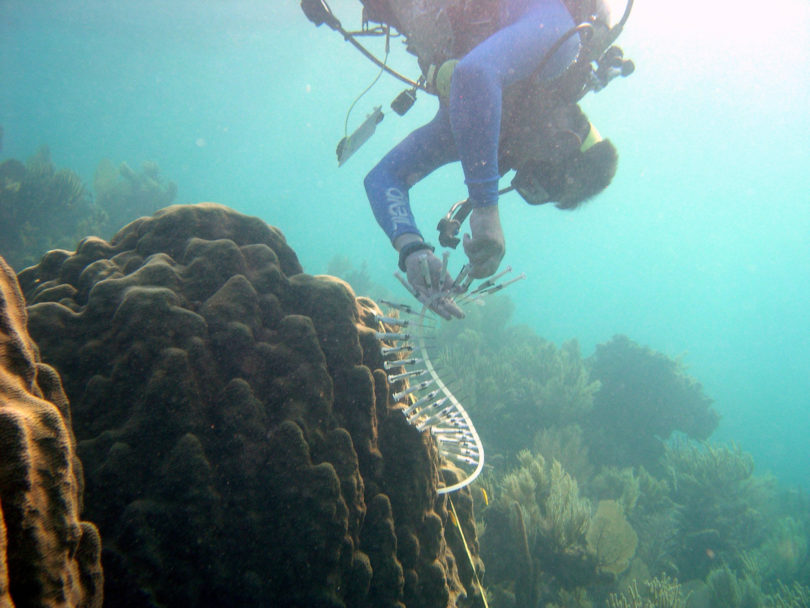 Study documents corals before, during and after October 2009 episode

Athens, Ga. – New research by University of Georgia ecologists sheds light on exactly what happens to coral during periods of excessively high water temperatures. Their study, published in the journal Limnology and Oceanography, documents a coral bleaching event in the Caribbean in minute detail and sheds light on how it changed a coral’s community of algae—a change that could have long-term consequences for coral health, as bleaching is predicted to occur more frequently in the future.

Millions of people around the world depend on coral reefs and the services they provide. While coral reefs make up less than 0.1 percent of the sea floor, they serve as habitats for about 25 percent to 35 percent of all the oceans’ fishes, roughly 500 million people worldwide rely on them as a source of protein and for coastal protection, and they are responsible for billions of dollars in tourism and fisheries revenue.

Corals, in turn, depend upon single-celled algae that inhabit them, providing most of their food and giving them their color. But many species of these algae are highly sensitive to temperature, and are unable to survive as ocean waters warm. The coral can expel these algae when the water temperature grows too high, a phenomenon known as coral bleaching.

Lead author Dustin Kemp, a postdoctoral associate in the UGA Odum School of Ecology, had the opportunity to study a bleaching event while conducting research at a reef off Puerto Morelos, Mexico. He and his colleagues had been working there since 2007, taking samples seasonally from six colonies of Orbicella faveolata, also known as mountainous star coral, and their associated symbiotic algae.

Orbicella is the major reef-building coral in most of the Caribbean, but although common, it has an unusual trait. While most species of coral associate with just one dominant type of symbiotic algae, O. faveolata is able to associate with up to four co-dominant types at once—some of which are heat-tolerant and some of which are not—making it a particularly interesting coral to study.

In October 2009, the researchers’ sampling trip coincided with a period of unusually high temperatures, allowing them the rare opportunity to collect samples while a bleaching event was taking place.

“We were able to follow this coral at a very high precision and document how diverse assemblages of symbiotic algae are differently affected by the bleaching phenomenon,” Kemp said. “This was probably the first study ever to look at it under natural conditions this closely.”

Kemp took hundreds of samples approximately every 12 inches along established transects—a narrow section where measurements are taken—across all six coral colonies. He made sure to include samples from areas that appeared bleached as well as from those that still retained color. Because they had been collecting at the site for two years, and continued collecting after this event, the researchers were able to compare the communities of symbiotic algae before, during and after bleaching.

They observed that before the bleaching event, these particular corals contained three different types of algae, two of which were somewhat tolerant of the warm-water bleaching perturbation.

“The corals didn’t die after this bleaching event, they recovered—and that’s good, that’s important—but there could be potential tradeoffs associated with the shift to heat-tolerant algae,” said Kemp, adding that, for example, some heat-tolerant algae may provide less food than those they might replace. “That question of tradeoffs is what we’re working on now.”

Kemp is currently conducting research at reefs in the Caribbean and Pacific, looking at how heat-tolerant algae affect corals in areas where corals have been documented to have stable, long-term associations with heat-tolerant algae.

“In the Caribbean, we’ve lost 80 percent of the corals just in my lifetime,” Kemp said. “We know that increased ocean temperatures are one of the major threats to coral reefs worldwide. So understanding coral-algae dynamics, and how different algae can handle increased temperature, is important to see how the whole ecosystem will be affected by this environmental perturbation.”

The study’s coauthors are Xavier Hernandez-Pech and Roberto Iglesias-Prieto of the Universidad Nacional Autónoma de México, William K. Fitt of the UGA Odum School of Ecology and Gregory W. Schmidt of the UGA department of plant biology. The research was supported by the National Science Foundation and the World Bank. The paper is available online at http://aslo.org/lo/pdf/vol_59/issue_3/0788.pdf.