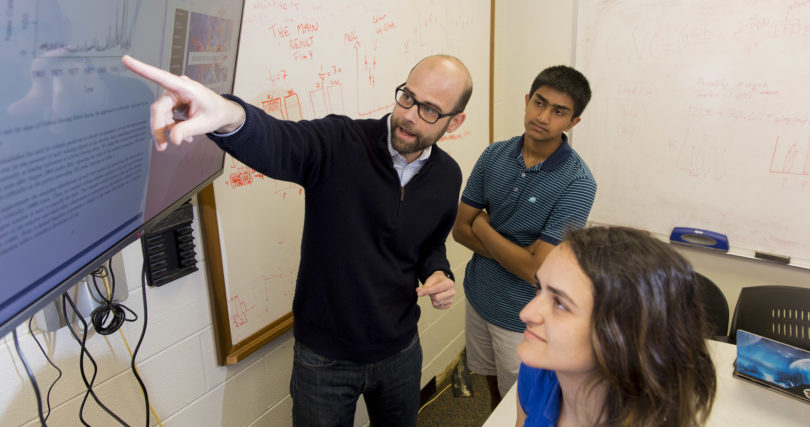 An early warning system for disease resurgence could be valuable tool

Researchers at the University of Georgia have demonstrated that disease surveillance data can be used to predict certain infectious disease outbreaks. The team detected early warning signals of a 1993 resurgence of malaria in Kenya in case reports from the roughly 10 years before the outbreak began. Their findings appear in the Royal Society journal Biology Letters.

The study was based on a theoretical framework for a disease forecasting system being developed by Distinguished Research Professor John Drake and his colleagues at the UGA Center for the Ecology of Infectious Diseases. It relies on the theory of “critical slowing down,” which predicts that telltale statistical patterns appear when a system under stress is nearing a tipping point—a point at which it changes irrevocably from one state to another.

Tipping points occur in all kinds of systems, from financial markets to Earth’s climate. In the case of infectious diseases, it is the point at which conditions become favorable for an outbreak to occur.

“A tipping point is when something about the underlying properties of the system cause you to move from low, stable transmission to an epidemic,” said Mallory Harris, the paper’s lead author. “And we can detect that through increases in these really simple summary statistics like mean, variance—things that you learn about in high school,” she said.

The researchers tested their methods by examining a resurgence of malaria that began in 1993 in Kericho, Kenya. Malaria had been controlled in the area since the 1940s with insecticide and medication. In late 1981, however, the parasite that causes malaria began to develop resistance to chloroquine, the drug being used to control its transmission.

Based on the theory of critical slowing down, the team expected that statistical indicators should have started appearing in malaria case reports as the underlying conditions changed. They predicted that as the tipping point approached, values for certain summary statistics would increase.

Using case data collected from 1982 through the resurgence by the hospital serving workers at Kericho’s two remote tea plantations, Harris analyzed the changes in 10 summary statistics over time. She found that five of them did indeed provide early warning signals that an outbreak was approaching, as early as 65 months prior to the resurgence event.

“The theory says that we should be able to do it but it’s really exciting to see the signal in the vector-borne diseases, especially because this was about malaria, which has one of the largest economic global burdens of diseases,” said Harris. “This is a disease that we would hope the method would work on, and based off of this historical case, this is evidence that it could.”

Harris, at the time of the research an undergraduate Honors student, explained that the study’s findings could be applied to many, but not all, infectious disease systems. In particular, such an approach could work to provide an early warning about the resurgence of diseases already circulating within a population.

“It’s not a crystal ball,” said Harris. “We can’t say, ‘A traveler is going to come and they’re going to have this mystery illness and then it’s going to be transmitted to the rest of the population.’ But what we can potentially say is that there’s something going on under the surface—whether that be the development of drug resistance, in the case of this study, or some sort of slow environmental forcing—and it’s changing the properties of the system in a way that will make it more conducive to disease transmission,” she said.

According to the World Health Organization, existing infectious diseases like malaria remain a leading cause of death in developing countries. An early warning system for disease resurgence could therefore be a valuable tool for public health officials.

“A lot of the time when you’re making these public health decisions you’re monitoring a bunch of locations, maybe thousands, and you’re trying to figure out, where do we need to allocate resources, where is there the greatest risk that we’re going to have a resurgence next?” said Harris, now a doctoral student in biology at Stanford. “The hope is that this would be a tool public health officials can use to help steer their decisions.”

Another key benefit of the team’s approach is its cost-effectiveness. For one thing, it relies on case report data that is already routinely collected. For another, early intervention can be far less costly than waiting until after an outbreak is underway to act.

“A lot of the time what ends up happening is we start responding to outbreaks and doubling down on public health measures once it’s already too late,” said Harris. “Whereas if we can detect these underlying signals that something is changing and an outbreak is headed our way, that would give more time to act proactively and that will also end up being a lot less expensive than trying to chase after thousands of cases.”

Support for the study was provided by the UGA Odum School of Ecology, UGA Center for Undergraduate Research Opportunities and the National Institute of General Medical Sciences of the National Institutes of Health under Award Number U01GM110744. Besides Drake and Harris, the study’s other co-author is Simon Hay of the University of Washington.