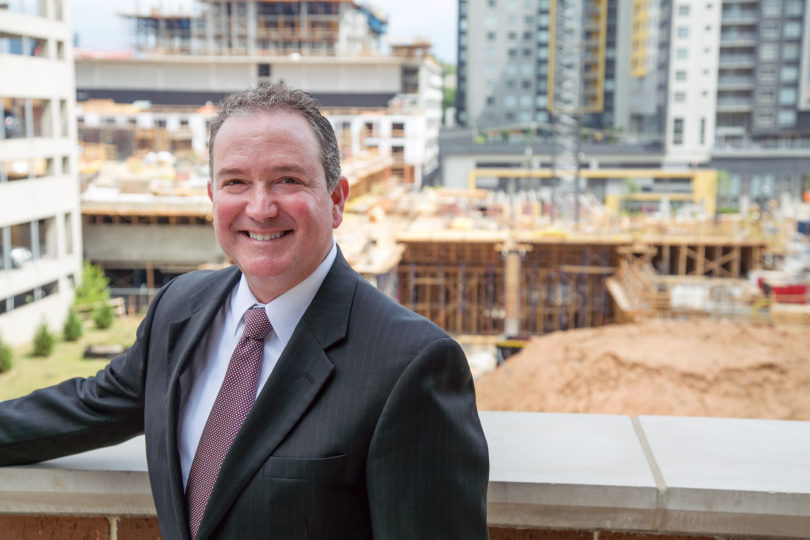 Based in Midtown Atlanta at the Centergy building

Sean McMillan is at the heart of economic development in the state of Georgia.

With an office located in the Centergy building in Midtown Atlanta, McMillan plays a critical role in attracting new industry and growing businesses already here. When it comes to showcasing all that the University of Georgia has to offer, he is a one-stop shop.

“I consider myself an ambassador,” said McMillan, who serves a founding director of UGA’s Atlanta-based office of economic development. “I take business prospects to campus to introduce them to whatever they’re interested in. But—just as important—I also bring the campus to them.”

From introducing business prospects to UGA’s various centers and institutes—such as the Food Product and Innovation Center (FoodPIC) in Griffin, which helps companies develop new food products—to connecting industry to faculty members who can provide expertise in a specific field, to identifying internships and job opportunities for UGA students, McMillan helps tie the state’s flagship university to businesses and communities across Georgia and—in some cases—around the nation and world.

“When companies know they’re going to get the next generation of workers trained to meet the needs of the 21st century, when they have access to the professors and programs we have in an environment of creativity, folks want to come and innovate,” said Chris Carr, Georgia’s commissioner of economic development. “The ease of access by having one point person is huge. We want to make it as easy as possible for people to have access to the University of Georgia.”

Carr’s office also is in the Centergy building, which houses the economic development department for the Georgia Electric Membership Corp., Georgia Power, Electric Cities of Georgia, Georgia QuickStart (part of the Technical College System of Georgia) and the Georgia Workforce Development as well.

In addition, several of the roughly 80 industry innovation and design centers in Midtown Atlanta are in the Centergy building, including Home Depot and Panasonic. The innovation centers are offices—separate from a company’s headquarters—that allow creative teams to contemplate new ideas and products.

Fostering growth and prosperity
“As a land-grant institution, one of our most important priorities is to help foster economic growth and prosperity in this state,” said UGA President Jere W. Morehead. “Providing a central doorway for businesses to access UGA’s vast resources is key to achieving this priority, and the economic development office serves as that doorway.”

Morehead established the Atlanta-based office in 2013 as part of a broader strategy to strengthen the university’s role in economic development.

“He knows better than we do what the university has to offer,” Carr said.

And he knows what the community has to offer UGA.

Eddie Mabe, human resources director for the Athens-based McCann Aerospace, reconnected with McMillan in Athens last year. The two had worked together years before in LaGrange.

McCann, which recently had been acquired by Accurus Aerospace Corp., needed qualified employees. McMillan connected Mabe with UGA’s College of Engineering and Terry College of Business.

Four students, three from engineering and one from business, are interning with McCann this summer. Hopefully, McCann said, the company can hire some of these students after they graduate.

“If it weren’t for Sean, we probably wouldn’t have made the right connections,” Mabe said.