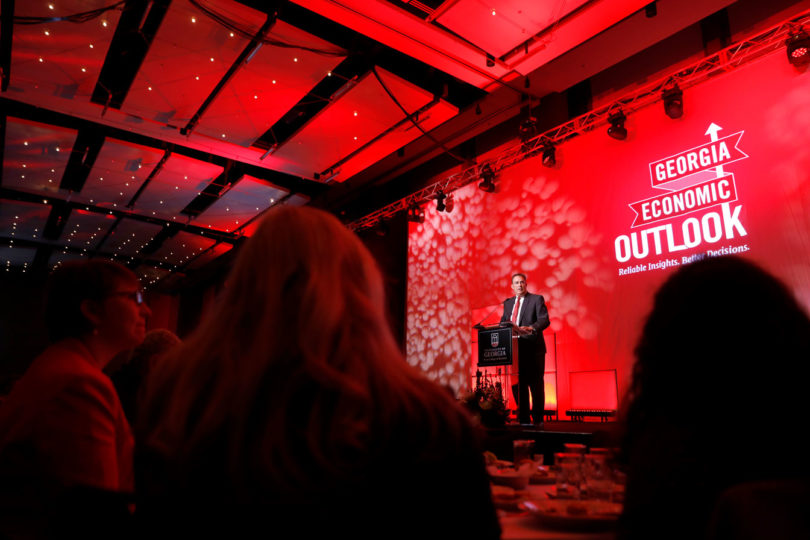 Georgia growth to outpace the national average in 2018

Georgia’s economy will match its performance last year, propelled by economic development projects, solid population growth and a housing recovery, according to the economic forecast from the University of Georgia Terry College of Business.

“At this late stage of the economic expansion, the outlook for Georgia is surprisingly good,” said Terry College Dean Benjamin C. Ayers at UGA’s 35th annual Georgia Economic Outlook. “The main factors that contributed to growth over the last few years will continue to do so in 2018.”

Ayers delivered the forecast, prepared by the college’s Selig Center for Economic Growth, to an audience of about 600 business leaders, government officials and chamber delegates at the Marriott Marquis in downtown Atlanta. Following the event, the Georgia Economic Outlook series will tour the state, visiting eight cities to deliver local, state and national forecasts. The schedule and ticket information are available at terry.uga.edu/eo.

“We believe Georgia will be one of the most successful states when it comes to landing economic development projects. Our state will have available workers and our workforce development programs rank as the best in the nation,” Ayers said. “Another factor that will pay off in 2018 and beyond is the state’s emphasis on targeted workforce training. The state of Georgia is building highly specialized workforce training centers designed to increase the supply of skilled workers, which, in turn will attract businesses in targeted industries.”

Georgia’s unemployment rate will fall below 5 percent, slightly higher than the U.S. jobless rate of 4.1 percent—and every metro area in the state will add jobs, Ayers said.

Larger shipments in Georgia’s ports and its increasingly important role as a logistics and distributions center, will help the state realize a 3.2 percent GDP increase, a notch above the national average of 2.5 percent, Ayers said.

Aided in part by the migration of about 109,000 people to the state, Georgia’s population will grow by 1.5 percent in 2018, outpacing the nation’s 0.7 percent growth.

However, not all the news is positive.

“Even though we expect economic growth for Georgia, the economy is operating in either the late-middle or late stage of the current economic expansion,” Ayers said. “That alone does not mean a recession is imminent. Still, we believe that excesses are developing in both the financial markets and the labor markets, which makes the overall economy increasingly vulnerable to the unexpected shock or policy mistake.”

Those risks include interest rate hikes by the Federal Reserve, a slowdown in multifamily home purchases, uncertainty over health care, global effects from Chinese financial turmoil and geopolitical tensions. 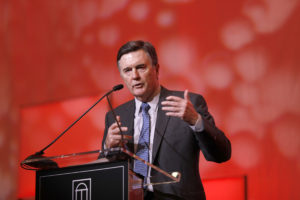 Ayers was joined on stage by Dennis Lockhart, former president and CEO of the Federal Reserve Bank of Atlanta, who delivered the national forecast.

Jeffrey M. Humphreys, author of the Economic Outlook report and director of the Selig Center for Economic Growth, said he expects solid economic growth for the nation as a whole.

“In 2018, consumer spending, gross private domestic investment, and industrial production will contribute to U.S. GDP growth. In addition, government spending will be a positive factor in terms of GDP growth,” he said. “The Federal Reserve’s monetary policy stance will switch from stimulating to essentially neutral.”

In addition, Humphreys expects small businesses across the nation to expand, thanks to increased business and government spending, a hike in exports and the addition of many projects to repair and rebuild properties damaged by recent hurricanes.

The Georgia Economic Outlook series is the largest outreach program hosted by the Terry College of Business. For 35 years, it has been the premier forecasting event in the state of Georgia.