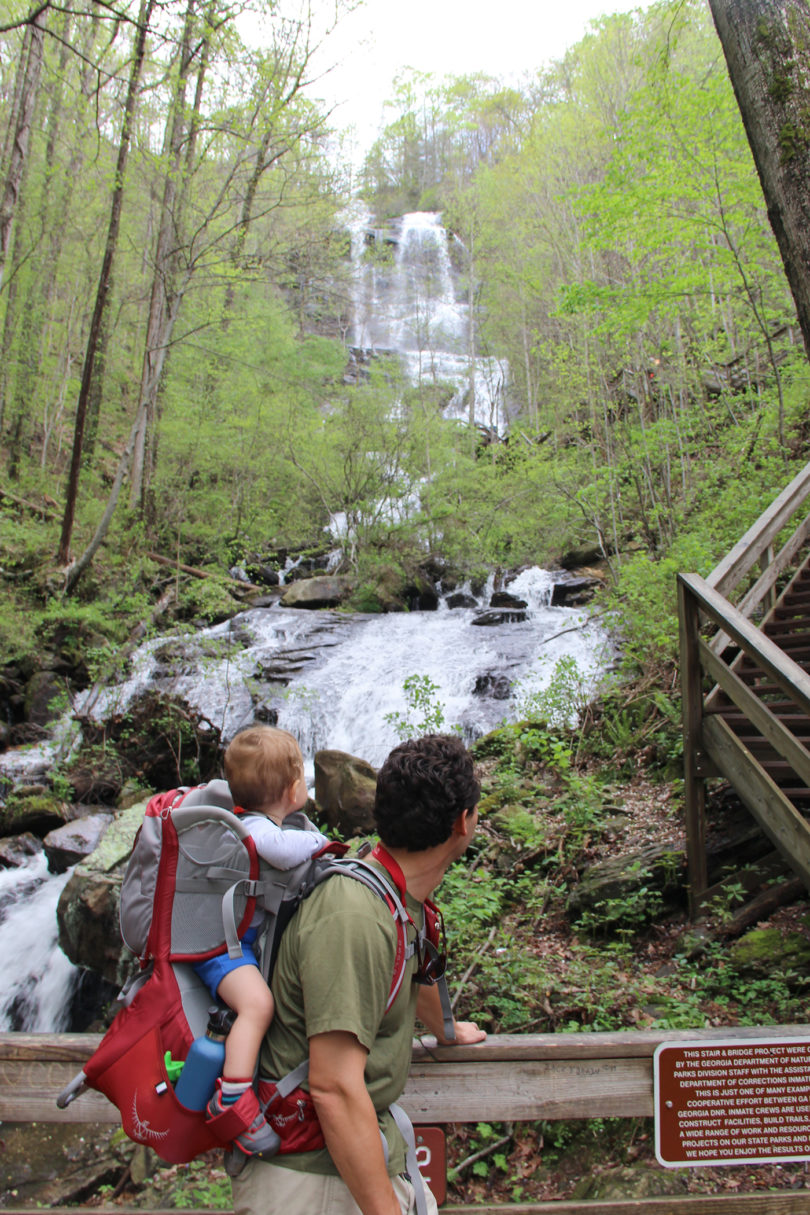 A father and son pause before continuing their climb at Amicalola Falls State Park in north Georgia. At 729 feet

Athens, Ga. – If environmentalists want to protect fragile ecosytems from landing in the hands of developers—in the U.S. and around the globe—they should team up with ecotourists, according to a University of Georgia study published in the Journal of Ecotourism.

Environmentalists often fear that tourists will trample all over sensitive natural resource areas, but tourism may bring the needed and only economic incentives to help drive conservation, said study co-author Bynum Boley, an assistant professor in UGA’s Warnell School of Forestry and Natural Resources. Ecotourism and natural resource conservation already have a mutually beneficial relationship that is ideal for creating a sustainable partnership.

Tourism is a $7.6 trillion global industry, provides 277 million jobs and is a primary income source for 20 of the world’s 48 least-developed countries, according to the World Travel and Tourism Council. It also subsidizes environmental protection and helps protect, conserve and value cultural resources that might otherwise be undervalued by the host community, Boley said.

In the new paper, Boley and co-author Gary Green, an associate professor also in the Warnell School, said that despite past tension between the tourism industry and environmentalists, the two should team up as allies to fight off increasing conversion of land away from its natural state.

Ecotourists not only provide a boost to the economy in such places, they can also motivate landowners into keeping the environment in its natural state instead of converting it into something unsustainable. They could also influence the public perception of conservation, Boley explained, which does not often favor environmental protection.

“The public has become increasing less prone to respond to environmental messages,” he said. “Economic messages are needed in order to attract the public’s interest.”

Too often, Boley and Green said, unique natural resource areas are converted into urban, suburban and agricultural developments without considering their ecotourism potential. In addition to the lost ecotourism revenue, there are a host of negative environmental consequences such as biodiversity loss, water and food shortages and the land being unable to mitigate the effects of climate change. These areas are not valued for their unique attributes or the valuable natural resources they provide, Green said, “so we lose them.”

Tourists have historically been seen as having a negative impact on the environment. Critics complain that they violate fragile and threatened natural environments while contributing to greenhouse gases from the increased number of flights to these exotic and often remote locales.

While these criticisms are justified, Boley and Green said responsible programs promote education of ecological conservation and environmental sustainability, fostering a greater understanding and appreciation of these exotic areas.

“Although ecotourism has its downfalls, environmentalists may have no other choice but to work with the tourism industry to protect key ecosystems,” Green said.

Boley and Green argue that ecotourists should be considered an ally to the environment and outline what they call a symbiotic relationship where an increase in conservation leads to ecotourism competitiveness.

“The health of an ecotourism destination and the health of its ecosystem go hand-in-hand because they coalesce to place a higher economic value on natural landscapes than would be represented through converting that land to other uses,” Boley said.

Boley and Green have proposed a new model where researchers consider how much money tourists bring to a region via ecotourism when calculating the value of that ecosystem, precisely because of this symbiotic relationship. They also suggest that managers of these destinations should begin tailoring their marketing toward responsible ecotourists to draw these travelers-and their money-there.

“A key point is that there is the potential for this type of symbiotic, mutually beneficial relationship,” he said. “The success of this relationship between ecotourism and natural resource conservation hinges on the ability to strike a balance between tourism development and resource protection, and the ability for those in control to take a long-term view of success where cumulative profits, resident quality of life and ecosystem health are valued over short-term economic gains.”

The study, “Ecotourism and natural resource conservation: The ‘potential’ for a sustainable symbiotic relationship,” is available online at http://www.tandfonline.com/doi/abs/10.1080/14724049.2015.1094080?journalCode=reco20.