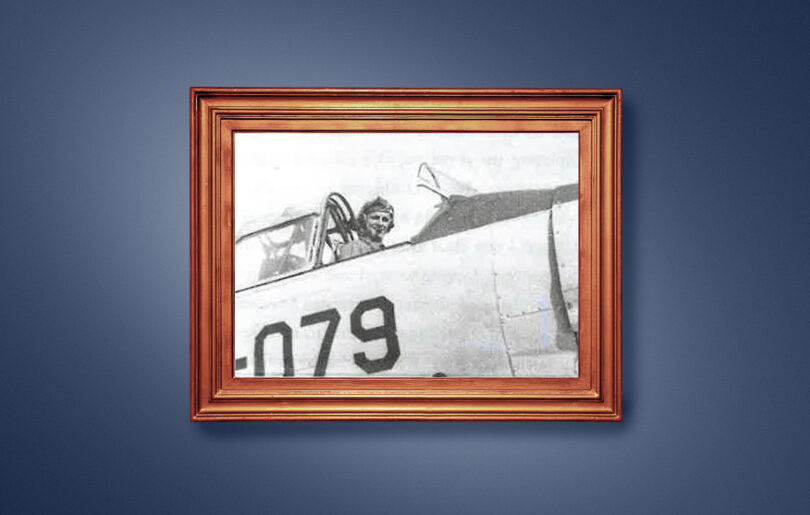 Edgar Helmey in the cockpit of a T-6 trainer aircraft on the day of his first solo flight. (Photo illustration by Jackie Baxter Roberts/UGA)

Edgar L. Helmey waited in the cockpit of the single-engine T-6 for clearance to take off. His feet held firmly to the brakes. His knees, however, were shaking.

By this point, Helmey had flown dozens of times without incident in Air Force flight school. This time, though, there was no flight instructor in the back. No one to take over if something went wrong.

But if he was going to earn his wings and become an Air Force pilot, he had to ace this high-stakes test.

Training to become an aviator was never part of Helmey’s plans. Heck, he’d never even flown in a plane at all before joining the service. 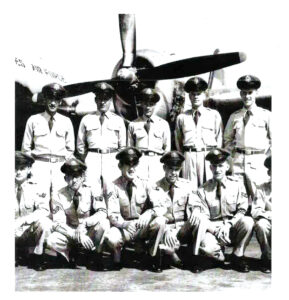 Edgar Helmey (top, second front left) and other airmen in front of a bomber in the 1950s.

The Georgia native was born at his family’s farmhouse in Effingham County near Savannah in 1928. He went to high school during World War II. Though his family didn’t have much money, Helmey was determined to go to college and become an engineer. He was able to secure financial support to attend Georgia Tech, but that support fell through after his first semester.

He returned home to work until he secured the funds to attend the University of Georgia to study agricultural engineering.

From Athens to the Air Force

While on campus, Helmey BSAE ’51 took classes with the late Rudolph Driftmier, then-director of the agricultural engineering program; worked at a lab curing sweet potatoes; and saw the Bulldogs play between the hedges at a much smaller Sanford Stadium—compare 36,000 seating then to nearly 93,000 now.

By the fall of 1950, Helmey was in his last semester at UGA. But the Korean War had just started, and Helmey’s number was one of the first on the Army’s draft board.

He was able to delay his induction by a few weeks and joined the Air Force instead that December. The dean of the then-College of Agriculture checked Helmey’s grades and waived his final exams so he could report for duty and still get his degree. His engineering career would have to wait.

Helmey passed basic training and was directed to Air Force’s electronic school for ground control radar. No one in his class could get leave during the 28 weeks of training, which meant Helmey wasn’t allowed back in Athens for his June graduation ceremony.

But Helmey was determined to make it anyway.

After pressing his first sergeant, Helmey scored two successive three-day passes, but they were only good for a 200-mile radius of Biloxi, Mississippi. Athens is more than 400 miles away. If caught outside that range, he could be arrested, but at least he wouldn’t be AWOL.

He was willing to risk it.

“I am the first college graduate of all the Helmey descendants that came here in 1734— and I wanted that diploma,” Helmey says. “They said they would mail it to me, but I wanted to go get it.”

Helmey hitchhiked to Georgia, where his parents watched him walk the stage at Sanford Stadium.

He took a bus returning to Biloxi to ensure he reported back in time.

After watching other would-be pilots—guys who had boasted of their aviation skills—wash out of flight school, Helmey assumed that, sooner or later, he’d be sent away next.

But here he was on a small Florida airstrip about to take his first solo flight.

Needing to control his nerves in the cockpit, Helmey took a breath and attempted to steady his mind and his legs. 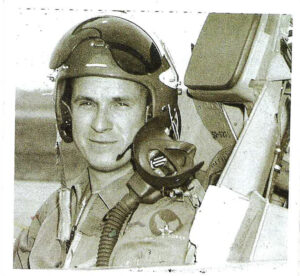 “I tried to hold them still with my hands, but they wouldn’t stop,” he recalls.

Finally, Helmey was cleared for takeoff. As he taxied to the runway, the shakes began to settle. The quiet determination that had and would carry him through difficult times took over.

In his nearly 30 years of combined active duty and reserve service, Helmey would take many more flights. He piloted clunky B-29 bombers, supersonic jets, and massive cargo ships. Although the Korean War ended before Helmey could be sent there, he was recalled during the Vietnam War to take exhausting trans-Pacific cargo flights, which kept him in a constant state of jetlag.

Being a pilot was just one facet of many in Helmey’s life. He and his wife, Marilyn, had two sons, and Helmey had a successful career as an agricultural and civil engineer for the federal government in Georgia and Pennsylvania.

After Marilyn died in 2015, Helmey began writing his story in a three-part book series, Life As I Remember It. Much of that writing came in 2020 while Helmey was locked down in his assisted living facility in Raleigh, North Carolina, where Helmey lives now at the age of 94. 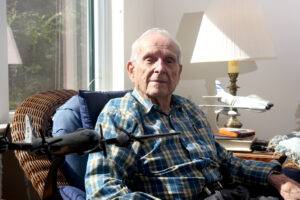 Edgar Helmey in his Raleigh home. Now in his 90s, Helmey has documented much of his life in a book series titled “Life As I Remember It.” (Aaron Hale/UGA)

But back in Lakeland, 70 years ago, Helmey was instructed to land. Focusing more on keeping control of the aircraft after touchdown than a perfectly smooth landing, Helmey completed his first solo flight. His instructor came over the radio, “A good job. Now give me two more just like that.”

Later that day, per the first solo flight tradition, Helmey’s shirttails were cut off.

Life As I Remember It Parts I-III are available for order at most booksellers.