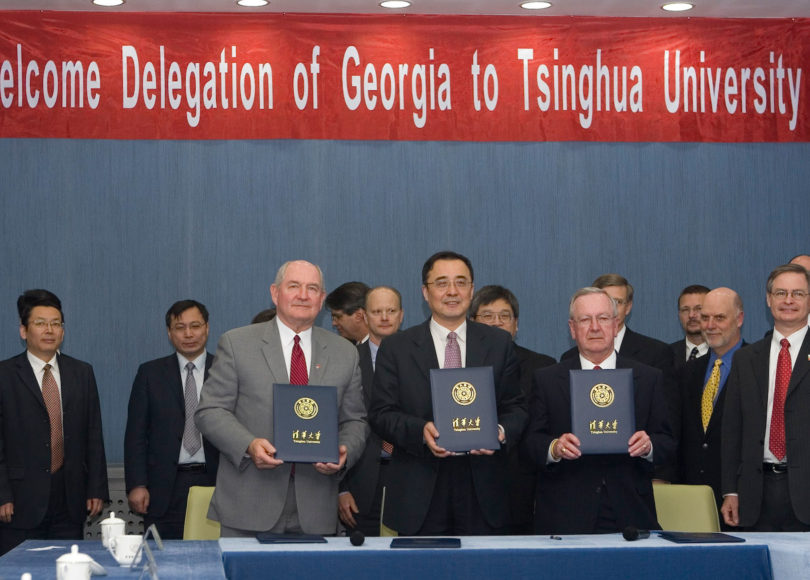 The agreements with Tsinghua University, in Beijing, and Nanjing University, in the ancient city of Nanjing in east-central China, were signed in early April when a delegation of Georgia business, government and education officials, led by Gov. Sonny Perdue, made a trade mission to China.

Among those in the delegation were Provost Arnett C. Mace Jr. and Steve Wrigley, vice president for government relations and director of the Carl Vinson Institute of Government.

Tsinghua and Nanjing universities are considered two of China’s top universities, according to Mace, and the agreements open doors to important economic, educational and cultural opportunities for UGA and the Chinese universities.

“These agreements are a giant step in strengthening the University of Georgia’s global presence, which is one of our major strategic goals,” Mace said.

“Not only will they provide valuable educational benefits for the students and faculty of both universities, but they also support economic expansion initiatives in Georgia that will lead to more jobs and greater growth for our state.”

Both agreements provide for cooperative activities including student and faculty exchanges, collaborative research programs and jointly sponsored seminars, workshops and service programs. The Nanjing agreement also may provide for the Institute of Government to conduct training courses in such areas as personnel management, budgeting, finance and leadership, according to Wrigley.

The courses would be for government employees and also possibly for Nanjing students working on master’s degrees in public administration.

Tsinghua and Nanjing universities are among the most selective higher education institutions in China, enrolling some of the country’s brightest high school graduates and producing many leaders in government, science, business and other fields.

Tsinghua, established in 1911, is considered to have the nation’s best programs in engineering, applied ­sciences and medicine. The faculty includes 18 members of the Chinese Academy of Sciences, and one professor has won a Nobel Prize. The world’s first modular high-temperature gas-cooled reactor was built at Tsinghua University, along with the world’s first biochip that integrates electrical and magnetic field forces.

The modern Nanjing University was founded in 1915, but its history dates back to the year 258, making it one of the oldest institutions of higher learning in the world. Its host city, with a population of more than five million, is the second largest commercial center in East China and has served as the Chinese capital several times during the country’s long history. Nanjing was the first co-educational university in China and the first university to offer doctoral degrees. It is considered a leader in Chinese language education and culture, literature, art, history, biology, physics, computer science and business studies.

UGA already had agreements with several other Chinese universities for study-abroad and exchange programs.