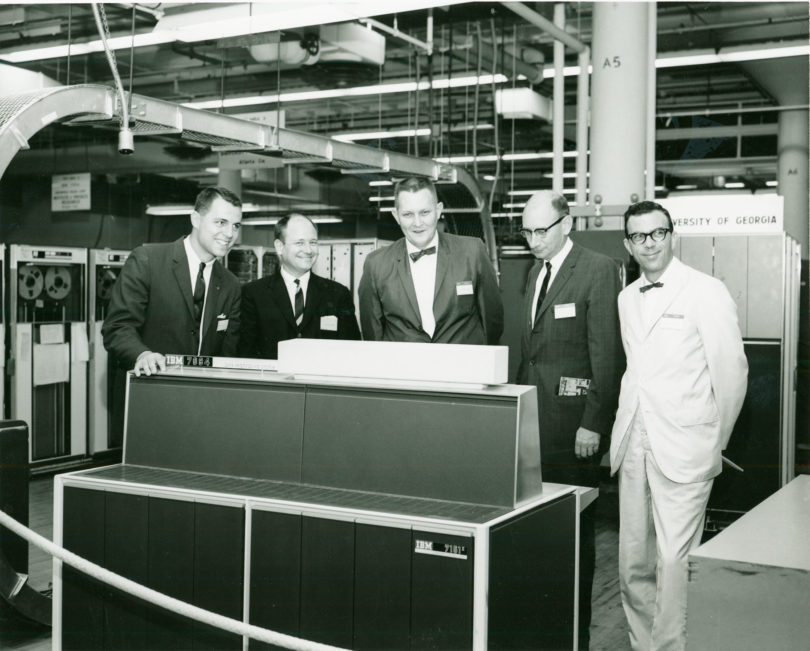 The first thing you should know about the computer in your office is that it’s the product of a lot of work. Not from the people who created it, boxed, shipped and set it up (though they also put in time), but for the people who keep it connected.

Every university computer is connected to the UGA network­—a massive, webbed entity that keeps the programs running and users in synch with the system and each other.

That system, an integral and invisible part of the modern campus, was born 50 years ago with one man and one refrigerator-sized machine.

As the university gears up to celebrate the 50th anniversary of Enterprise Information Technology Services, it’s helpful to take a look back at how the enterprise came this far.

In 1957, James Carmon, an animal husbandry professor, persuaded the university to buy an automated computing machine from IBM to help process agricultural data. After securing the purchase, Carmon became head of the department of experimental statistics, the university’s first computing wing.

Under Carmon’s leadership, the department steadily expanded until 1982, when Apple Computers Inc. launched what was billed as the first personal computer, and UGA started toward the largest technological shift in its history.

Personal computers promised to streamline tasks and ease work, but the reality of maintaining them meant a ballooning department, growing from about three people to more than 200. A centralized network, where people would physically come to the computer, was replaced by network computing as the campus became synched with itself and the outside world in new ways.

“People always went on about how computing introduced such efficiencies and as a result reduced the number of personnel to produce various tasks, but programming and the management of data are some of the most labor-intensive applications that human kind has ever devised. So the personnel involved was immense to support these automated applications,” said Walter McRae, former chief information officer who worked at UGA for 30 years.

So what does EITS do? The department comprises the support staff of university interconnectivity. Computer wires, like water mains,  run everywhere throughout campus. The department’s primary duty is the support, maintenance and operating of this network. Even though the English department may handle its computers within Park Hall, once the wires leave the building, they fall under EITS’ domain.

The department also acquires and distributes desktop software. Programs such as Microsoft Word and anti-virus applications are available on university machines thanks to deals struck by EITS’ bulk purchasing of licenses. The computer system also needs to reinvent itself about every four years; so updating the network with minimal interruption is left to EITS.

“Based on the outcome of the 2006 and 2007 Compact Planning process in concert with the Office of the Provost’s five-year planning process, future goals will include a continued effort on behalf of securing critical and sensitive data while providing the level of access and interchange of data and information necessary by a campus such as UGA,” said Barbara White current chief information officer and associate provost.

“For example, recognizing the reliance on e-mail as a communication tool and the forthcoming timeline for ­current e-mail system upgrade, staff will be entering a systematic assessment process evaluating options for future e-mail platforms to meet the needs of students, faculty and staff,” White also said. “Increased attention to the extended campus requirements such as the new Griffin Student Learning Center and the teaching and learning environments and interface with the residential campus providing access and increased functionality will be high on the list of priorities. Recognizing the continued requests for central hosting and backup will be part of the component of the goal of a ‘next generation network,’ ” she said.

“This goal also includes efforts in broadening the potential for high performance computing capability in concert with the other research institutions in Georgia.

“Based on a collaborative and shared responsibility model, efforts in support of a model for business continuity and disaster recovery for UGA will continue, led by UGA senior management involving the four Georgia research institutions,” White added. “And, a major goal is the continued effort to identify a solution for administrative business systems enabling both data management and integration capability; an immediate goal within this arena is the issue of identity management and the move to an identifier as an alternate to the SSN with the exception of those arenas requiring the Social Security number.”