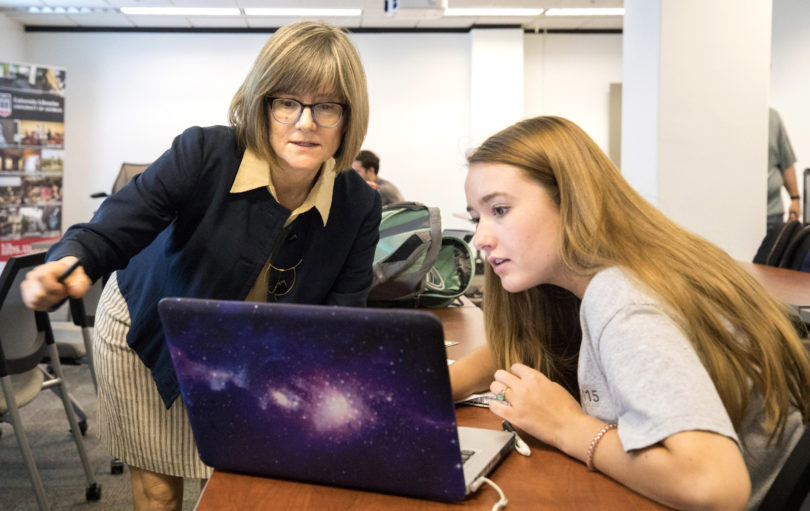 Elizabeth Wright, professor of Spanish in the Franklin College of Arts and Sciences, gives students research opportunities that help them develop transferrable skills they can apply after graduation—whether as educators, scholars, entrepreneurs, public servants or world travelers.

Where did you earn degrees and what are your current responsibilities at UGA?
My doctorate in Spanish literature is from Johns Hopkins University. Before that, I earned a Master of Arts in English literature from Northwestern University while still working full time in commercial banking in Chicago. My undergraduate degree from the University of Illinois at Urbana–Champaign was in finance.

At UGA, I teach undergraduate and graduate courses focused on the literature and culture of Spain’s “Golden Age” (circa 1490–1700). I am also the editor of the Bulletin of the Comediantes, the longest running academic journal devoted to the study of theater from this era. In addition, I serve on an array of committees that support the missions of the department of Romance languages, Franklin College of Arts and Sciences, and Willson Center for Humanities and Arts.

When did you come to UGA and what brought you here?
I came to UGA in August of 1998, right after graduating from Johns Hopkins.

I love to teach a course called “Caminos hacia la novela moderna”—the Pathways to the Modern Novel—where students discover the first picaresque novel, ballads from Spain’s rich oral traditions, and Miguel de Cervantes’ “Don Quixote.” These works are great fun to read. But they are also milestones in the emergence of the modern novel.

I am proud of my collaboration from 2009 to 2014 with Sarah Spence, professor of classics, and Andrew Lemons, a UGA graduate (B.A. and M.A.) who was then completing a Ph.D. at Princeton University and is now on the faculty at Clemson University. Together we translated a previously unexamined corpus of neo-Latin poems about the Battle of Lepanto, the epochal galley clash of 1571. In recognition of our project’s significance, we received a major grant from the National Endowment for the Humanities and were awarded a monthlong residency at the Rockefeller Foundation’s Bellagio Villa on Lake Como in Italy. Upon completion, Harvard University featured our annotated edition and translation in its I Tatti Renaissance Library.

How do you describe the scope and impact of your research or scholarship to people outside of your field?
My scholarship ponders an abiding paradox of empire building in the early modern era (circa 1490–1800). That is, the expanding horizons of the Spanish monarchy—both geographic and cultural—coincided with the explicit prohibition of religious diversity and with the codification of bias against ethnic and racial minorities. I seek projects that focus on borderlands of the Spanish empire, where officials representing the Crown or the Catholic church came into close contact with other languages, governing systems, people and religions. For example, my latest book, “The Epic of Juan Latino: Dilemmas of Race and Religion in Renaissance Spain” (2016), examines how this former slave from sub-Saharan Africa mobilized an array of educational initiatives meant to Christianize the Hispano-Muslims of Spain (Moriscos) to negotiate his own freedom and social advancement. In time, Juan Latino became the first black African to publish a book of poems in Europe.

Every course I teach builds up to a multifaceted research project, where students synthesize their findings in analytical essays and in interactive presentations designed for the benefit of their colleagues. To guide them, I collaborate with UGA librarians to design on-site research workshops at the Main Library and the Russell Special Collections Libraries. At the same time, students provide me with many insights and inspirations. A concrete example of this came as I was finishing “The Epic of Juan Latino.” A student majoring in Spanish and international business—Ashley Gibson (class of 2015)—drew my attention to the long-forgotten account of the Spanish research trip undertaken in 1926 by Arthur Schomburg, a noted bibliophile of the Harlem Renaissance. He was seeking evidence about the life of Juan Latino and other black artists who lived in southern Spain in the sixteenth century. I was proud to cite her research paper in my book (“Epic of Juan Latino,” p. 227), since it recovered a missing link in the scholarship on this important writer of the African diaspora. 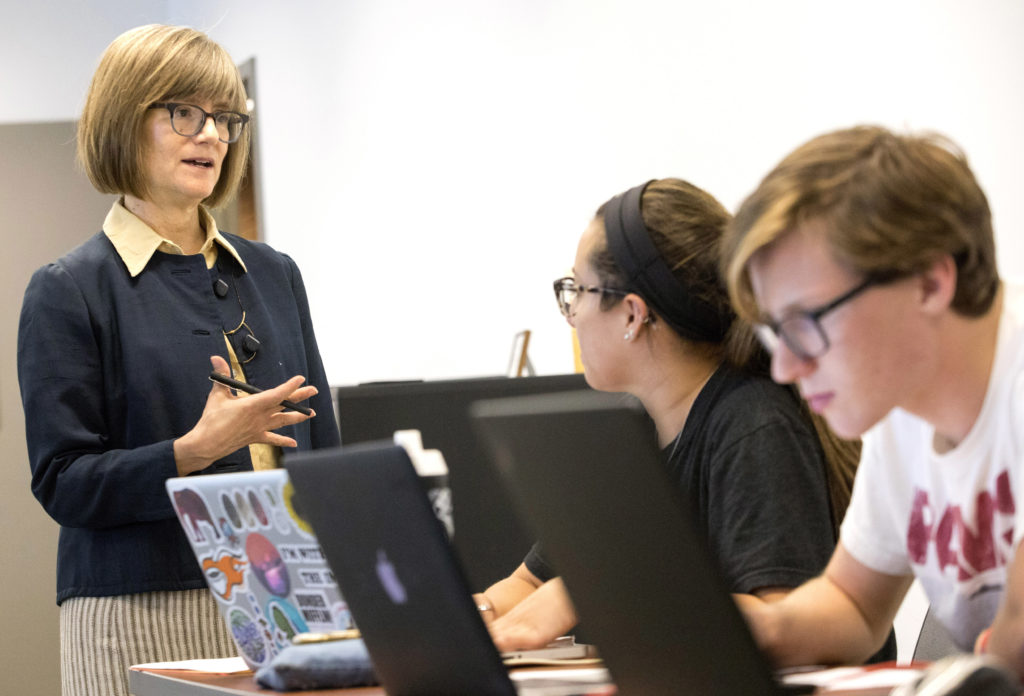 Elizabeth Wright tells students that “the paths to a meaningful career are many, varied, and unpredictable.” (Photo by Dorothy Kozlowski/UGA)

What do you hope students gain from their classroom experience with you?
Students who choose a public research university should benefit from the latest research shaping the fields in which they are majoring or minoring. To do my part in this regard, I structure each course so that it culminates in an assignment that models humanities research. This kind of scholarly exercise helps students develop transferrable skills they can apply after graduation, whether as educators, scholars, entrepreneurs, public servants or world travelers. On a different note, since my path to a career in academia included a post-college stint waiting tables in Chicago and a first career in banking, I strive to reassure students when they worry about choosing the right major and landing a good job after graduation. The paths to a meaningful career are many, varied, and unpredictable.

My ideal students engage their colleagues by posing questions directly to them, thereby making the classroom a learning community. They also will draw on their own individual research agendas to enrich classroom discussions. Beyond the semester—whether two weeks or 10 years later—they will get back in touch to tell me what they are doing and, if pertinent, let me know how I can be of support. I also like to be surprised. When a student shows a previously hidden strength or otherwise complicates my impression, I am reminded of just how exciting it is to teach.

… take a break in the Founders Memorial Garden to collect my thoughts.

… walk downtown to join friends for a movie at Ciné and then debrief over a late supper.

Favorite book/movie (and why)?
I love the parodies of classic movie genres in the Coen brothers’ “Hail, Caesar!” (2016).

The Art Rocks Athens festival of 2014 told the story of the adventurous UGA art students from the late 1970s who became break-out indie musicians. College towns and public universities around the country resemble one another in many respects, but Art Rocks was truly an only-in-Athens, only-at-UGA event.