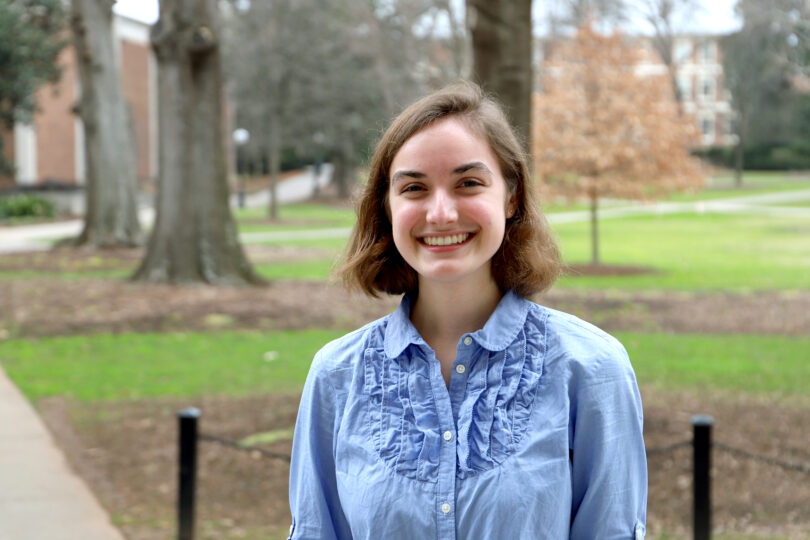 University of Georgia senior Emeline McClellan of Good Hope will continue her studies in classics this fall as one of 24 Americans selected as a Gates Cambridge Scholar. The scholarship fully funds postgraduate study and research in any subject at the University of Cambridge in England.

McClellan is UGA’s eighth Gates Cambridge Scholar in the program’s 20-year history. The scholarship, which recognizes intellectually outstanding postgraduate students with a capacity for leadership and a commitment to improving the lives of others, was established by a gift from the Bill and Melinda Gates Foundation. Since the first class in 2001, Gates Cambridge has awarded 1,932 scholarships to scholars from 111 countries who represent more than 600 universities globally.

“The University of Georgia congratulates Emeline on this impressive achievement,” said UGA President Jere W. Morehead. “We are delighted that another UGA graduate will represent our institution at the University of Cambridge through the Gates Cambridge Scholarship program.”

An Honors student in the Franklin College of Arts and Sciences, McClellan will graduate in May with bachelor’s degrees in classical languages and classical culture with a certificate in medieval studies. As she pursues a master’s degree in classics at Cambridge, she plans to write a thesis on Augustine’s theories of music, committing herself to a forward-looking examination of ancient musicology. Both of her parents are classical musicians, she said, and because of this, a deep love for sound, language and music has shaped her research interests in the classics.

McClellan has conducted extensive research on authors such as Sappho, Augustine and Gregory of Tours, including editing a 399-page translation of Latin minutes from the AD 411 Council of Carthage, examining the role of confession as a trope in Gregory of Tour’s sixth-century “History of the Franks,” and researching elements of Neoplatonism in St. Augustine’s “De trinitate” with Erika T. Hermanowicz, associate professor in the classics department. She also conducted research on the structural relation between two lyric poems by the Greek poet Sappho under the direction of Charles Platter, head of the classics department.

McClellan has received numerous awards in Latin and Greek studies both on campus and at a national level, including a perfect score on the CAMWS National College Greek Exam. She has presented her research at several undergraduate research conferences, including two specifically for undergraduates studying classics.

She is a Phi Beta Kappa and UGA Presidential Scholar. McClellan founded Your Writing Tutor, a tutoring service for middle and high school students; was a volunteer tutor in literature and composition; and has served on her church’s service and support team.

“Emeline McClellan exemplifies the commitment to academic excellence that defines the University of Georgia,” said S. Jack Hu, the university’s senior vice president for academic affairs and provost. “I congratulate her on being named a Gates Cambridge Scholar and also want to express my appreciation to our Honors Program and to the many faculty members who have inspired and mentored her.”

UGA’s major scholarships coordinator, housed in the Honors Program, works closely with students across campus as they apply for national, high-level scholarships. For more information, visit honors.uga.edu/c_s/scholarships/ext/external.html or contact Jessica Hunt at jhunt@uga.edu.