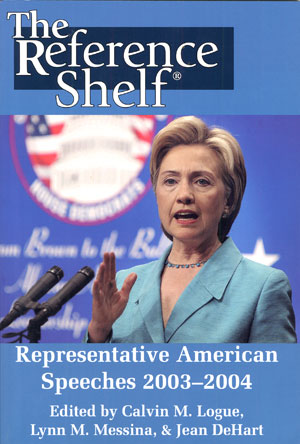 When 2003 began, the United States was drawing closer to war with Iraq, as the Bush administration declared its certainty that Iraq possessed weapons of mass destruction. By the end of the summer of 2004, the intelligence used to bring the country to war was deemed faulty. As the 2004 presidential campaign progressed, the public’s attention was increasingly drawn both to Iraq and to the hearings of the bipartisan 9/11 Commission investigating the terrorist attacks of Sept. 11, 2001.

Representative American Speeches 2003-2004 contains a selection of key addresses that discuss these and other issues that took central stage during this time period. The book is co-edited by Calvin Logue, UGA professor emeritus of speech communication.

In addition to a chapter of speeches that examine the two-pronged issue of intelligence gathering and interpretation, the book also includes speeches by individuals who express their concerns about a number of important issues, including the U.S. attempts at nation-building around the world. In another chapter, speakers salute the American military veterans. The last two chapters over issues that have also been of great interest to Americans during 2003 and 2004: intellectual property rights and the nation’s natural resources.